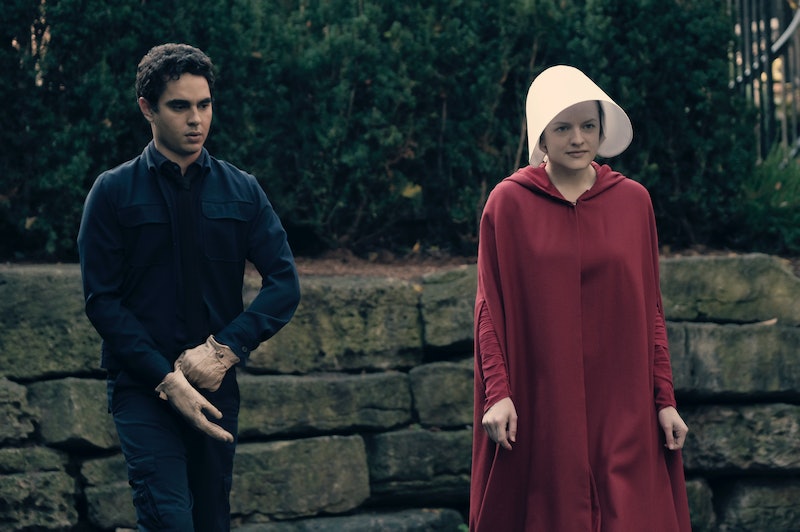 In the book yes, the two do become lovers — though it doesn't start out like a normal romantic relationship. How could it, in Gilead? Sexual politics have been thrown out the window in the worst way. What happens is that Serena Joy "sets them up" in order to help impregnate Offred. The two women fear, for different reasons, that it's the Commander that is sterile. If Offred doesn't produce a child soon, she will be sent to the colonies and almost certainly die. That arrangement turns into a full blown affair between Nick and Offred, and the two become close, developing feelings on what appears to be both ends. However, Offred is never sure whether or not Nick is a spy or a rebel.

Nick and Offred definitely have a tension-filled dynamic on the Hulu series, but I don't want to trust it. Offred clearly doesn't either. Even though Nick is not high status in this society, he's not necessarily an ally. He was at least complicit in the fundamentalist takeover of the government. Plus, Ofglen warned Offred that there was an Eye, a government spy, in her house. There aren't that many people in the house, so Nick is a definite candidate. That doesn't exactly make you want to snuggle, and I don't like to think of Nick as a potential savior figure. June shouldn't and doesn't need help to save herself. It's just unfortunate that Nick's real cute, I suppose.

In this world, it definitely isn't safe for them to be having an affair. Anyone who sleeps with a Handmaid and isn't "supposed" to could be killed, it seems like. I for one don't want to watch Nick get kicked to death, even if he is an enemy spy.

So I guess I would say that I'm not against it, but not actively hoping for anything either. Clearly, the people in the puritanical dystopian world of The Handmaid's Tale could use a little consensual roll in the hay. It's just more of a risk than usual with Offred and Nick, so hopefully they don't rush into anything.