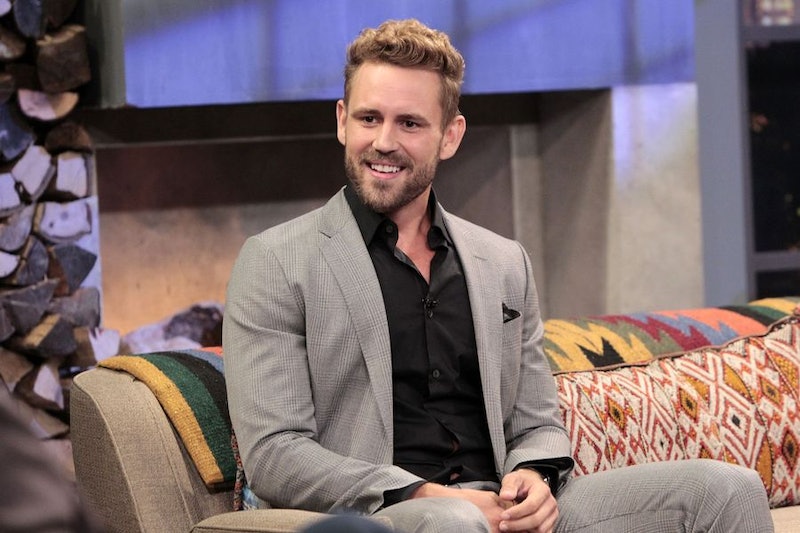 As much as we may want them to, seasons of The Bachelor don't last forever. If you’re on the show, you need to have a game plan as to how you’ll spend your time and keep your fame rolling (oh, and money, too) after the cameras have switched off. Nick Viall, the current Bachelor, was on a Bachelor Nation show three times before his stint on his own season, so he knows how to keep momentum. But, Nick also knows that Bachelor appearances will soon slow down, especially if he chooses a fiancée at the end of his season. Can’t keep going on Bachelor shows if you have a wife, you know? (Although Marriage Boot Camp seems popular amongst married alumni.) Since quitting his job in software sales, Nick Viall is starting a men's grooming business, according to Glamour, which makes sense. Nick knows his way around a beard.

As he told Glamour of his change in career: “I had a great career selling software. I was living in Chicago, and after Kaitlyn’s season I was lucky to have the option to go back. They always gave me their blessing to take risks out here.” But, now he's moved over into a new field, he told the magazine.

“A few months before I was asked to be the Bachelor, I actually started a small business with a couple partners. It’s online and for men’s grooming products, so I’ve been focusing a lot of time on that…. Right now, my focus career-wise is on that [men’s grooming] business. I’m very lucky that being in the The Bachelor world gives you a platform. I’ve used my business acumen that I’ve learned in corporate America and the platform that I’ve been fortunate to gain in The Bachelor world to kind of see if those two can work together.”

Called Polished Gent, the company is basically Birchbox for men. It will include grooming products, beard oils, face cream, shaving lotion, and other products for basic maintenance. A source close to the project tells Bustle that the business is slated for a late February 2017 release and that Nick has been working on it behind the scenes since last summer.

The product fits right in line with what Bachelor fans are already used to seeing sold via their fave reality stars. It's kind of like the Fab Fit Fun box that several Bachelor stars have taken turns partnering with, but Nick, along with his partners, will be using past business experience to launch this new concept in the men's maintenance space. I'm thinking he'll see a lot of sales from women who want their husband or boyfriend to look a little more like Nick, who, like I mentioned, does have a really great beard. Plus, Polished Gent plans to donate some proceeds to charities related to domestic violence, pediatric cancer, and men's health issues.

He didn't have one on Andi's season of The Bachelorette, but as soon and Kaitlyn's season rolled around, BAM! Bearded Nick emerged. Here's a look at all Nick's beard can do.

It Likes A Little Danger

A little too close to the edge for me there.

It Looks Good In A Tuxedo

All dressed up and no place to go, besides the Bachelor mansion.

Who doesn't though, you know?

Just a little selfie action with Mom and Dad Viall.

It's On A Journey For Love

So, Nick's business may not be launching until late February, but I'm predicting it'll see a pretty popular start. Not only does Nick have the beard to back his products up, but I think he's a smart guy, and he knows he can't be on The Bachelor forever. Unless Chris Harrison's job is opening up...