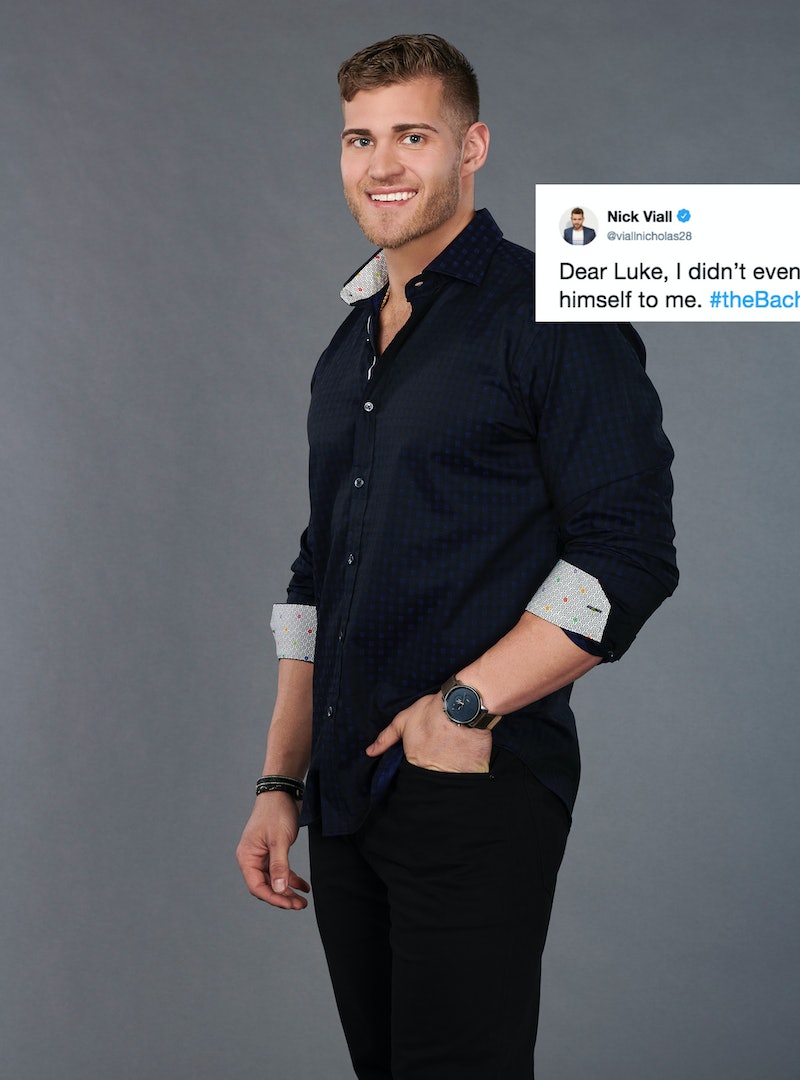 If anyone knows what it's like to be a contestant on The Bachelorette, it's Nick Viall. He was famously a two-time runner-up on the show. So of course, he watched the premiere episode from Hannah Brown's season. Not only that, but he has some strong opinions. In other words, Nick is not a fan of Luke P. from The Bachelorette — at all. And that's putting it nicely.

Nick was very open about his dislike during the May 13 episode of the Bachelor Party podcast. Luke got Hannah's first impression rose, but did not get one from the former Bachelor lead. Nick wasn't even asked about the contestant. Instead he brought him up by asking, "What do you think about Luke P.?" And then Nick described him as a "terrible human being." Wait, do they know each other or something? Nope, apparently Nick just wasn't feeling what he saw during the episode.

When podcast host Juliet Litman said, "Luke P. seems really fake," Nick responded with, "Seems?" Needless to say, Nick does not think Luke was there for the right reasons. He made fun of what Luke shared during his intro package, remarking, "The world's full of the less fortunate and people in need, but no, [God] took the time to visit Luke P. in the shower because he was getting too much sex."

At one point, the franchise alum theorized, "I don't know if it will reveal itself this season. He may just keep saying all the right things long enough to not look like an asshole, but mark my words, at some point we will all see the real Luke P." Hmm, does Nick have some insider information? Or just some very strong instincts? It's currently unclear.

It wasn't just the Luke's shower storyline that irked Nick. He also took issue with his limo entrance. Nick explained that he was bothered by "his opening line to Hannah describing himself as 'the king of the jungle' and [saying] hopefully, she will be his queen."

Instead, according to Nick, Luke should have taken a different route. Nick even offered a revision of the opening line: "But maybe, if you have me, Hannah, I will be your king." He lamented, "It's her goddamn season. He's already claiming ownership."

At least Nick was able to put things into perspective a little bit when he added, "I give him a little bit of a pass because he's 24." After expressing his strong dislike for the Bachelorette contestant, Nick said, "When he shows he's not great, just send me a text. Just remember that I said it because it will happen."

The podcast wasn't the only place he shared his feelings. He also had a lot to say on Twitter during the premiere. Of course, Nick hated on that God in the shower story — again.

Plus, Nick called out Luke for not giving Hannah his jacket after she said she was cold. Numerous times.

Just for good measure, Nick reminded everyone that he received the first impression rose on Andi Dorfman's season of The Bachelorette, just like Luke. And he didn't even need a pre-filming intervention in the shower. Plus, Nick actually did give Andi his jacket when she was cold, as seen in the photo he shared.

Sure, Luke P. won Hannah over during the first night, but Nick is not at all impressed. What do viewers think? And most importantly, how will his season with Hannah progress throughout the season? Only time will tell.