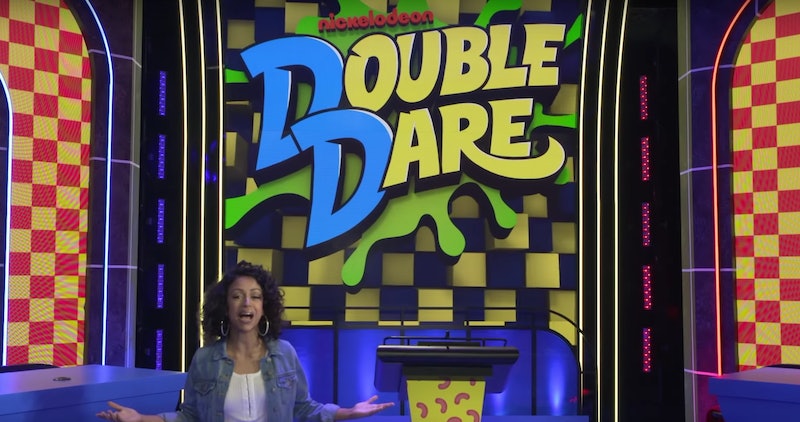 Double Dare has been a staple of Nickelodeon since the late '80s, and it's easy to see why. The fun game show combines wacky dares with family fun, and it's all types of entertaining to watch. But up until now, the family teams have been pretty heteronormative — usually with a standard husband-wife team and their offspring. Now, Nickelodeon's Double Dare had their first gay couple on the show. It was sweet, to say the least. And about damn time.

On an episode that premiered the week of Christmas, according to NewNowNext, a team of four consisted of two kids and two dads. The typical lineup of contestants always has either a pair of kids or two parents and two kids, but the parents have consistently been a heterosexual couple. But all that changed in 2018, with a Blue Team consisting of dads, Liberty and Bryan, and their sons, Oscar and Marcos.

In the episode, host and YouTube personality, Liza Koshy, introduced the history-making family as the "Double Dads." She said: "They love football and they love each other, they are teams Double Dads." She continued, noting that the two were making history on the Nickelodeon TV show, saying, "That's right, it's about time we had double dads on Double Dare."

Koshy then asked them about their love of football love, and one of the dads mentioned that it's a common interest the whole family shares. "We love it so much," he said. "Basically all fall through Christmas, that's what we do every Sunday." That's a lot of football throwing, but also many hours of quality family time, which is clearly very important to the family. The Patriots and Dolphins are two of the teams most of them support, though the youngest confidently told viewers that he loves the Panthers.

Koshy asked some more intimate questions as well, asking what the kids call their dads — it's "Dad" and "Papa," by the way — and then also how the little family came to be. "About six years ago, we were fortunate enough to adopt our sweet boys and it's been amazing ever since," one of the dads answered.

Double Dare has been around since the 1987 in different variations of the same premise. In all iterations, from Super Sloppy Double Dare to Double Dare 2000, the show pits two teams against each other in obstacles and games that are messy and out of control. There's slime and hilarious stunts, to say the least. And kids usually win games and other toys in place of a cash prize.

This wouldn't be the first time Nickelodeon had a same-sex couple on screen in one of their shows. In 2016, the network broke ground in an episode of the animated series The Loud House when, according to a report from LGBTQ Nation, they featured the "first ever portrayal of a same-sex male couple" on the kids' television network.

Even though it may seem like just one step, and maybe not even a super big one, the fact that Double Dare featured a same-sex couple is still important. Denouncing the stigma and hate surrounding LGBTQ+ people is a significant task, and normalizing families of all stripes is a great step towards that goal. Besides, this family was perfect for the show. As Koshy said in the episode, "Double dads, double sons on Double Dare. I love it."