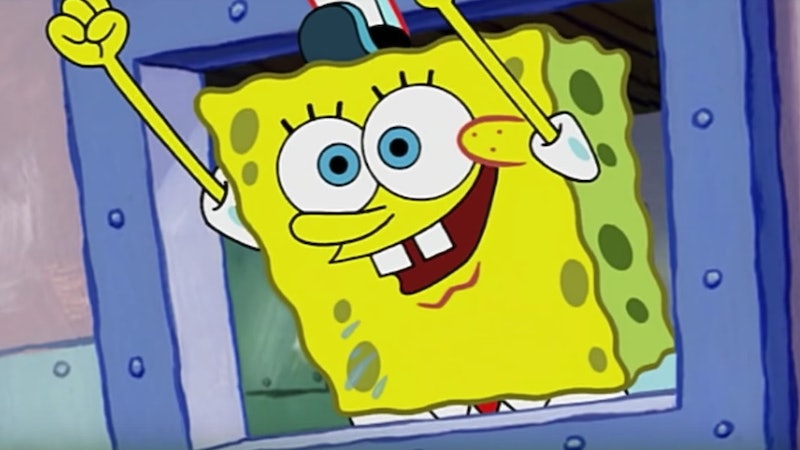 Happy Pride from Bikini Bottom: Nickelodeon’s Pride post with SpongeBob has Twitter celebrating asexual representation. The network celebrated the LGBTQ+ community on Twitter on June 13 with colorful art from Ramzy Masri including images of SpongeBob from SpongeBob Squarepants, Schwoz (Michael D. Cohen) from Henry Danger, and Korra from The Legend of Korra. SpongeBob’s inclusion with Schwoz, portrayed by a trans actor, and Korra, a bisexual character, became a top trending moment on Twitter as users expressed excitement over the fact that the beloved sea sponge is, in fact, queer.

While SpongeBob’s queer status has come as a surprise for some, many were quick to point out that SpongeBob’s late creator Stephen Hillenburg, who died in 2018 from Lou Gehrig's disease (also known as ALS), regarded the sea critter as part of the LGBTQ+ community. Hillenburg confirmed SpongeBob and Patrick's asexual identity in an interview with the Wall Street Journal in 2002. "No one is shut out," he said. "I always think of them as being somewhat asexual." He doubled down in 2005 when a conservative group accused the series of promoting a "gay agenda" and told Reuters, “It doesn’t have anything to do with what we’re trying to do… I consider them to be almost asexual.”

Now, with SpongeBob’s asexual identity in public discourse once again, many on Twitter are celebrating the sponge’s queer status. Asexual (also known as Ace) people tend to be underrepresented in pop culture, which only makes the beloved yellow sponge's identity all the more important. As Twitter user @tequilahobi wrote, "a reminder that spongebob is asexual and that we need more ace representation in cartoons and teen series/sitcoms."

Nickelodeon’s Pride tribute comes after the network expressed solidarity with the Black Lives Movement in the wake of nationwide protests organized in response to the death of George Floyd, a Black man who died while pinned under a white police officer in Minneapolis. The network announced plans to go off air for eight minutes and 46 seconds — the amount of time the police officer spent on Floyd’s neck — “in support of justice, equality, and human rights” on Twitter on June 1. Nickelodeon also outlined six “declaration of kids’ rights," which read, in part, “You have the right to be seen, heard, and respected as a citizen of the world" and, “You have the right to be treated with equality, regardless of the color of your skin."

Between Nickelodeon's inclusivity with the LGBTQ+ community and the Black Lives Matter movement, it appears that the kids will, in fact, be alright.

More like this
Ozzie’s Coming Out Scene With Kitty On 'That ’90s Show' Has Twitter Sobbing
By Brad Witter
Linda Ronstadt’s “Long Long Time” Plays A Pivotal Role In The Last Of Us
By Brad Witter
Here’s What Happens To Bill & Frank In 'The Last Of Us' Video Game
By Brad Witter
Adam Ali Hopes 'Waterloo Road' Will “Subvert” Queer Misconceptions
By Sam Ramsden
Get Even More From Bustle — Sign Up For The Newsletter
From hair trends to relationship advice, our daily newsletter has everything you need to sound like a person who’s on TikTok, even if you aren’t.