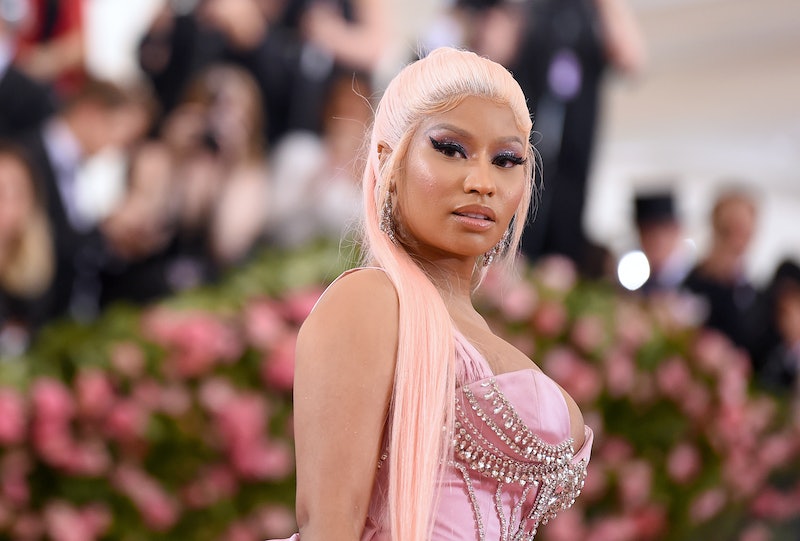 Ever since Adele first showed off her rap skills during an episode of "Carpool Karaoke," fans have been waiting for her to collaborate with one of the biggest names in hip hop — and it seems like it might finally be happening. During a recent interview with Entertainment Tonight, Nicki Minaj teased an Adele collab, calling it an "epic song." She even claimed that the two have already shot a music video for the track. But, as Minaj fans know, it's best to take every announcement she makes with a grain of salt.

The rapper broke the news when asked whether she and Adele would ever collaborate on music together after the singer went viral again by performing Minaj's "Monster" verse at a party in Los Angeles back in June. "Yes and yes, yes and yes, wooo hoo!" Minaj said. She continued, "Adele made me swear to secrecy that I'm not allowed to tell anyone that I'm working with her. And that we already shot a video. And it's an epic song! Ahh!"

Naturally, Minaj's announcement sent plenty of fans into a frenzy on social media, including Twitter user @diante_minaj, who wrote that the rapper "better not be f*cking lying" about the song and video. Unfortunately, it seems like the rapper may have, indeed, been joking; Minaj responded to the tweet by writing simply, "Ummm" along with an embarrassed-looking emoji. (Bustle also reached out to a rep for Adele about the reported collaboration, who had no comment.)

Even if the "epic song" in question isn't real, the love between Minaj and Adele definitely is. In 2016, the rapper praised Adele for her "Monster" rap on "Carpool Karaoke," tweeting, "Adele is mad ratchet. I can’t take her." Minaj also shared the clip on Facebook, writing, "Pull thru, QUEEN! ‪#‎Adele‬ ‪#‎Monster‬ the attitude & fingers to match. ‪#‎Oh‬ ‪#‎Ok‬ ‪#‎IcoNic‬ I cried when she waved bye to the careers ‪#‎Hello‬ ‪#‎BuhBye."

If it does come fruition, the Minaj and Adele collaboration would likely be a part of the latter's upcoming fourth album, which is reportedly set for release by the end of 2019, according to People. In May, the singer teased that she was working on new music in an Instagram post celebrating her 31st birthday. "30 tried me so hard but I’m owning it and trying my hardest to lean in to it all," the Grammy winner wrote, before ending her post by joking that "30 will be a drum n bass record to spite you," instead of her traditional ballads.

"She is definitely getting ready both mentally and physically to promote new music. It seems it will happen later this year," a source told People in September about Adele's supposed upcoming album. "She talks about last year as a very difficult year, and she’s said in the past that creating new music is almost like therapy. You can tell that she is ready to share with her fans."

Minaj is also working on a new album, which she told Elle in September will be "fierce, fun, and unapologetic." She continued, "It’s probably the most excited I’ve been about an album release in a really long time. I’m happy that we’re not making my fans wait for another album, like I’ve done in the past," referencing the four-year wait between 2014's The Pinkprint and 2018's Queen. "This one incorporates all the things people love about Nicki, but it also just has a way bigger sound, so it goes perfectly with the collection."

If it's "bigger sound" that Minaj is going for, then Adele certainly is a good partner in crime.