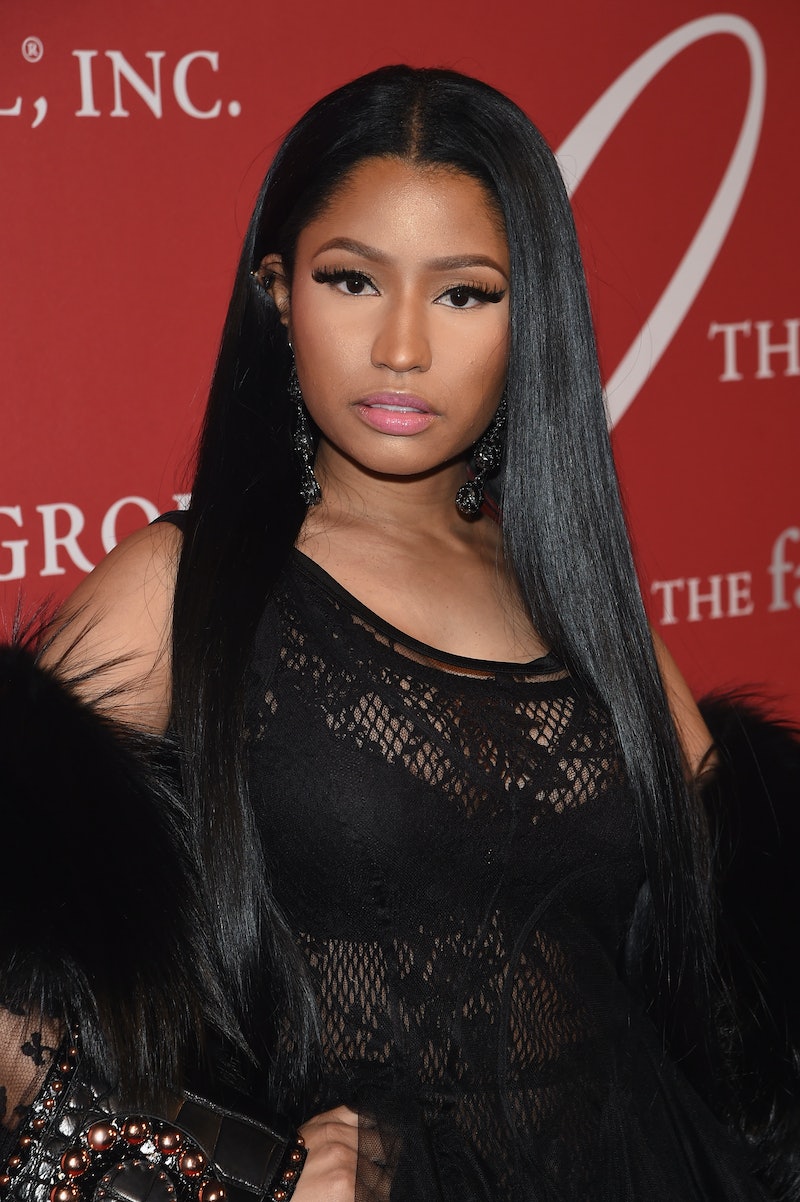 As anyone who's ever gone through a bad breakup can attest, nothing tastes sweeter than that celebratory drink when you're finally, totally over it. And not only is Nicki Minaj's new song, "Regret In Your Tears" the perfect musical accompaniment for that feeling, but the singer is also serving up some feminist realness on her Instagram in promotion of it, too. Describing, "Regret In Your Tears" as being her new "favorite song of all time," Minaj's feminist statement on Instagram begins with her setting the scene for her fans, explaining: "We been drinking pina coladas listening to it non stop GETTING LIFE!!!!!!!" See? There's that sweet sip of freedom I was talking about.

Seriously, go grab yourself a Piña Colada, so that you too can harness all the positive power of Minaj's message with the same joy with which she wrote it, as she says:

...dedicated to all the bad ass, intelligent, strong, loyal women out there. When a man loses us, he loses so much more. Love YOURSELF! You're worth being treated like the QUEEN u are. Never forget that. They gotta APPRECIATE your magic. Or get the steppin. With Love.

Man, I love her. And whether you're single, dating around, or in a long term relationship, it's a message that I think every woman can appreciate. Minaj's statement encapsulates the necessity for respect and unequivocal love in a relationship. But, crucially, it also reaffirms how essential it is for women to be the greatest, most formidable version of themselves, and not to dilute who they are for the comfort of a romantic partner. And that's something that "Regret In Your Tears," as a song, also powerfully suggests.

Though there's a melancholic edge to the song's melody, ultimately "Regret In Your Tears" finds Minaj rising above and conquering those feelings with self-belief, confidence, and strength. In fact, the song sees Minaj palpably refusing to cling onto the "hurt" of her past relationship, instead leaving her ex to wallow in those feelings himself.

When she sings, "I just want the memories, tried to make some with you/ Now I gotta erase some with you," she's actively taking control of the broken relationship and filtering out the parts that cause her undue pain or make her feel less than she deserves.

Instead of internalizing how the end of her relationship has made her feel, and accepting any sort of blame for her exes behavior, Minaj holds steady and reminds him of who she is. The line "You don't even know what you just had/ You don't even know, and that's what's bad" acts as a reminder that her worth is something worth recognizing and appreciating.

But to neglect acknowledgment of a woman's "magic," as Minaj described in her Instagram post, isn't just hurtful, it's also an attempt to weaken a woman, to mistreat her, and to get away with it. And no woman should have to stand for it.

As Minaj's Instagram message and "Regret In Your Tears," makes very clear, every woman deserves to know her own worth and shouldn't allow anyone else to degrade that value with their own behavior or opinions. Breakups, like many love affairs, can be tough and confusing to navigate. But as Minaj points out, the only true love affair you need to really worry about is the one you maintain with yourself.

So, let's all leave those no-good lovers from our past (or present) to sip on their own tears. Because the rest of us? Yeah, like Minaj, I think we're probably going to be blasting this song for a good while longer, and drinking Piña Coladas like the absolute Queens that we totally are.