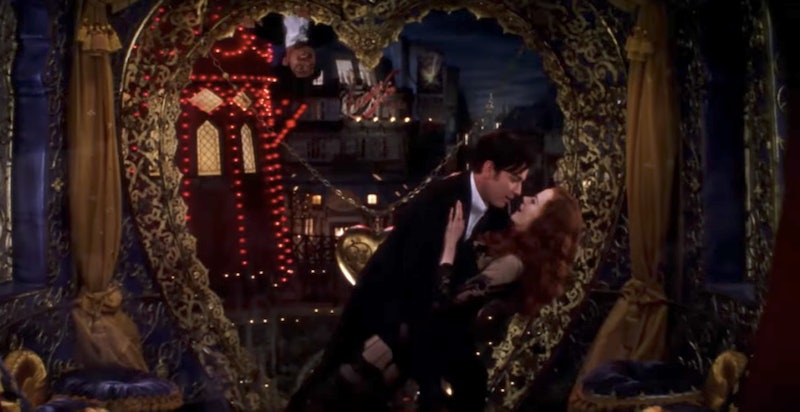 Nicole Kidman and Ewan McGregor never really left the Moulin Rouge. Or rather, the Moulin Rouge never left them. Sixteen years after Baz Luhrmann's drama/romance became a sensation, Kidman and McGregor reflected on Moulin Rouge! for Variety's Actors on Actors series and had way too much fun as the memories came rushing back. Remembering joining the project, their extensive workshops, and their absinthe-ridden parties, the actors were laughing and smiling like two teens reminiscing on summer camp. Even after all this time, the stars arguably love Moulin Rouge! as much as the fans, if not more than.

For nostalgia lovers, consider this video as Christmas coming early. Both stars agree that the film was, in a way, their baby — one that they knew would be a hit. "I don’t think you do work unless you think it’s going to be great," McGregor said. "We gave about a year of our life to that film," Kidman told him. "But, hey, I'm so glad." Seeing how giddy the two got just reflecting on it will make fans fall in love all over again.

Part of the reason the film became such a profound part of both actors' lives is because of how much they helped shape it and how they grew from the experience.

"We’d work on a scene and then a week later the work that we’d done on it as actors would have been incorporated in the writing," McGregor said. "And that never happens. That’s very rare." Both he and Kidman look back at the experience with nothing but smiles and happy memories. "It’s just gorgeous," Kidman said. "I always say this: when you get to share something like that together, it’s yours forever. It’s something we all created together and it bonds you in a very particular way."

And these two worked their butts off for the 2001 film, which earned over $57 million worldwide. (Hence, the immediate bonding.) In Baz Luhrmann fashion, there were epic parties with "gorgeous food," according to Kidman. "Remember those Friday nights, those Saturday nights?" she asked. McGregor laughed, saying, "Don’t remember all of them." But Kidman remembered. “I remember absinthe being passed out at some point and me going, ‘Is this safe?’ I was so naive... Dancing on the table," she said. I'm feeling very left out right about now.

Guys, look at these crazy kids. After all this time, the two actors have nothing but respect and adoration for one another. This video was like a time warp to 2001 and proves nothing can bond two people quite like a creation of art. Fans may be feeling the FOMO, but at least they have comfort in knowing the actors are still as obsessed with Moulin Rouge! as they are.