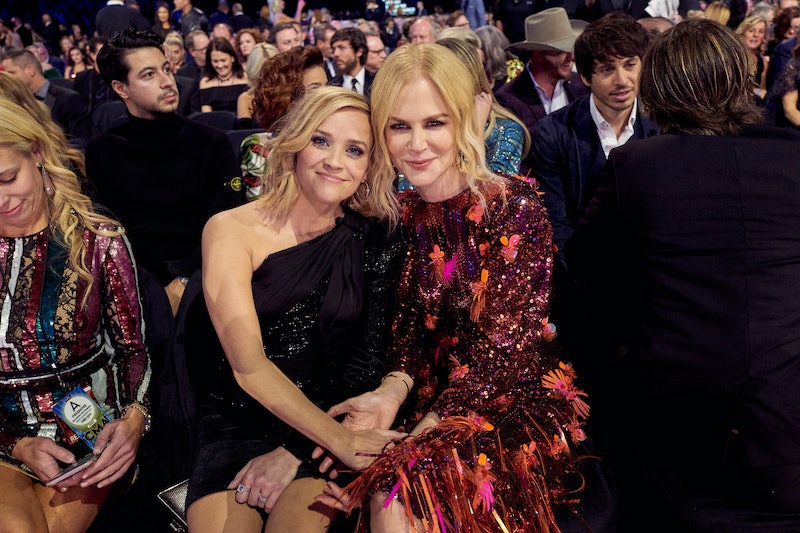 The Monterey Five (and maybe Meryl Streep) might just be back on your screen one day. Fans have been dying to see if Big Little Lies would return for a third season, and the latest news should fill fans with hope. Nicole Kidman gave an update on Big Little Lies Season 3, and thankfully, it's still a possibility. But it's up to the creative team to make the call.

In a new interview with Deadline, Kidman said that a third season of the beloved HBO series is definitely something she would consider, but whether it actually comes to fruition is all up to the show's writers and creators, Liane Moriarty and David E. Kelley. "If there is a third one, all of it will come from the writers, and that’s amazing," Kidman explained. "Liane is deeply talented. David is deeply talented, and the combination of them is extraordinary. So, where they would take it, I have no idea."

Kidman pointed out to the outlet that the second season only happened because Moriarty and Kelley felt inspired to write more material for the show's complex characters. "We’ll see if they’re ignited into building a life for these women, and which way they would go next," she said. "It’s so nice as actors having that, and that’s where it started. That’s where the second one started."

Kelley previously told E! News that BLL's second season was written as if it "were the end." However, given how the show's first season was initially planned to be its only one, the creative team has proven adept at changing their plans already. Kidman herself previously teased that there were already ideas floating around for a third season.

"I think we would love to do a season three because there is certainly ideas," she said to The Daily Telegraph in June 2019. "But we would not do it without all of the same people involved... even the kids." There's no word on whether that sentiment also applies to Streep, who joined the show during Season 2 as Celeste's controversial mother-in-law Mary Louise, but it would be hard to imagine the show without her now.

Kidman isn't the only BLL lady teasing the possibility of a third season. Laura Dern is up for joining the ladies again as Renata Klein, telling E! News that "there's no happier place to work on earth" than on set with the female cast, and Reese Witherspoon also seems down to become Madeline Martha McKenzie again. She even joked that her Morning Show co-star Jennifer Aniston should join the third season in an interview with The Times.

"Nicole would die to have you there," she said to Aniston. "She loves you. She's always like, 'How's Jen?'" While it's far from a sure thing, even the mere possibility of Aniston joining Big Little Lies should warrant a Season 3.

More like this
Everything To Know About 'Only Murders In The Building' Season 3
By Gretchen Smail and Kadin Burnett
'The Crown' Season 6 Has Suspended Filming "Out Of Respect" For The Queen's Death
By Bustle Staff
Here’s Everything Coming To & Leaving Netflix In February
By Jake Viswanath
At 28, Debra Jo Rupp Was Living A Much Different '70s Show
By Grace Wehniainen
Get Even More From Bustle — Sign Up For The Newsletter