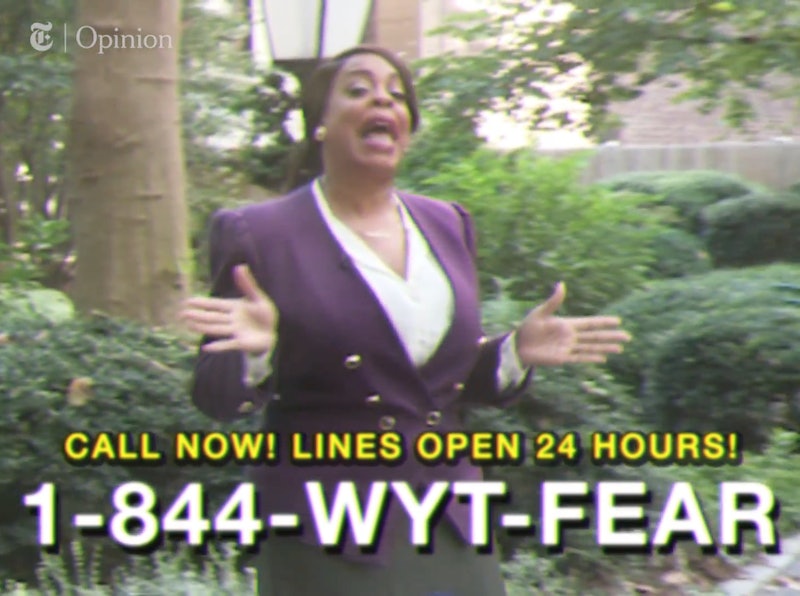 After months of BBQ Beckys and Cornerstore Carolines — viral incidents where white people called the police on black people going about their lives — comedic legend Niecy Nash now stars in a satirical infomercial titled “New! A Hotline for Racists.” The Emmy Award-winning actor plays the inventor and face of the hotline 1-844-WYT-FEAR, a phone line designed to revolutionize “the way racist white people cope with black people living life near them” by encouraging people to call the hotline instead of the police in non-emergency circumstances.

In the video for The New York Times, Nash lists such instances where people should reach out to the hotline instead of calling the police, all inspired by real life events. The list includes seeing people of color having a barbecue, taking a nap in a rec room, mowing their lawns, or waiting for a friend at a coffee shop. With cheesy musical cues and a delightfully '80s-inspired wardrobe, the video is a spot-on recreation of the late night infomercials of yesteryear. Only, instead of selling CDs or ShamWow, the satirical advert is a scathing commentary on the numerous incidents of white people calling the police on black people for doing everyday things.

“You’re scared. You’re white. But with cell phone cameras and social media, calling 911 on your black or brown neighbors just isn’t what it used to be,” Nash intones, looking straight into the camera.

The accompanying article underneath the video lists 39 publicly reported examples where someone called the police to report black people doing everyday tasks, dating back to April 2018. One of the more recent stories includes that of a white woman, dubbed "Cornerstore Caroline" by the Internet, calling the police on a 9-year-old black boy that she claimed touched her behind in a Brooklyn deli. The viral video of the incident drew public ire, and the woman later issued a public apology to the child.

With the ubiquity of Internet memes spawned from such instances, including “BBQ Becky” and “Permit Patty,” the phenomenon of white people reporting black people to the police for going about their routines is not exactly news. But the cultural shift towards smartphones and social media has helped shed light on the long-standing issue, exposing these injustices through videos on wide reaching platforms that let the public be the judge of the players involved, regardless of the actual outcomes from the police visits.

The hotline, in case you were wondering, is very real, to the delight of Twitter users everywhere. And beyond the video’s hilarious take on the issue, the article closes out with a request for people who have experienced someone calling the cops on them in such cases of racial profiling to email their stories or videos to the newspaper’s Opinion Video team at 844WYTFEAR@nytimes.com.

Fittingly, in a blink-and-you’ll-miss it moment at the end of the video, Nash is interrupted by two police officers crashing the infomercial, questioning what’s happening in the call room. As hilarious as the infomercial is up until then, it’s a sobering note to close the video on, reminding people that the issue persists outside the infomercial's satirical world. The video has garnered a hugely receptive response online, and hopefully will lead to broader and actionable conversations about racial profiling in daily life.