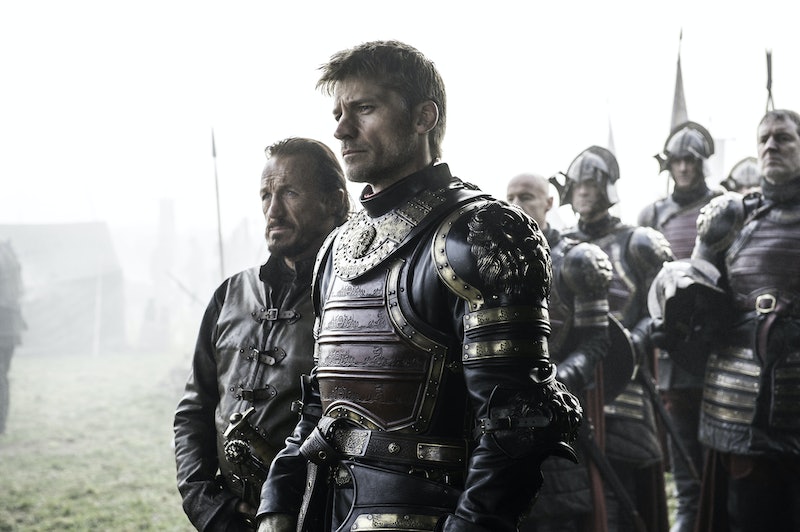 For one of Game of Thrones' most diabolical couples, it looks like the devilish ending some of us had believed would arrive may not actually arrive at all. Jamie Lannister, aka Nikolaj Coster-Waldau, doesn't believe Jamie kills Cersei in one of the final two seasons of Game of Thrones. Talk about a buzzkill. To be fair, if there's one person out there who would have even the faintest idea about who does or does not murder Cersei, it would be Coster-Waldau.

During a recent interview with The Huffington Post, the actor was asked about whether or not it would be plausible for Jamie to kill Cersei, as supported by a fan theory wherein the Maggy the Frog prophecy Cersei received as a girl foretold that one of her brothers would kill her. "It’s a theory… but it has a beautiful, romantic, tragic thing [to it]. It’s probably too obvious," Coster-Waldau replied, effectively dashing all hope for a good spoiler or theory confirmation.

The theory that led fans to believe that Jamie would be the one to kill Cersei is a bit of an intense one. It goes a little something like this: when Cersei was told, as a young girl, that she would marry Robert Baratheon and become queen, but that her children would outlive her, she was also told that she would be killed by the Valonqar. In High Valeryian, one of the many fictional languages in Game of Thrones, "valonqar" translates to "little brother." Cue ominous music.

This Maggy the Frog/Valonqar business has led many a fan to believe that Jamie would ultimately end up killing Cersei because, at this point in the television show, he is one of the few people who could actually get close enough to Cersei to strangle her, as Maggy predicted. Remember: Jamie and Cersei are siblings and lovers (try to not gag), meaning that he could just take her out — in a murder-y way — in one fell swoop.

Coster-Waldau's rejection of the theory could be read a few different ways. Either he is trying to throw fans off the scent and the show follows this theory to the letter. Conversely, Game of Thrones does go through with killing Cersei but they deviate from the script and she dies at the hand of another person — maybe a more plausible foe like Daenerys or Jon Snow.

Either way, Cersei is not long for this world. Coster-Waldau's theory-squashing is a bit sad, but hopefully it only heightens the curiosity even further about what dastardly end Cersei will actually meet as Game of Thrones comes to an end.