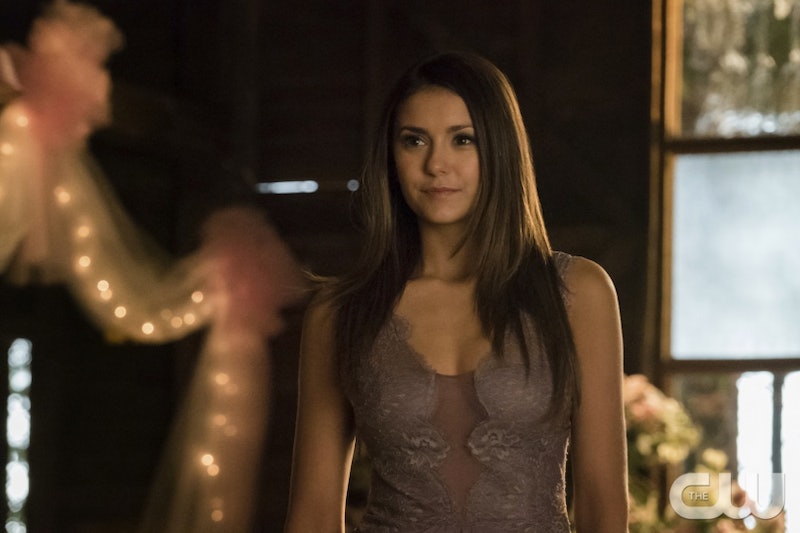 In a photo posted to her account on Thursday, she shared an image of a script for The Vampire Diaries, with the caption, "I know it's Thursday, but this is not a TBT. #BackOnSet #TVDForever," and the internet instantly went into meltdown over the news. While it had long been speculated that protagonist Elena might be back for the final episode, it was unclear whether or not Dobrev would actually be able to return to the show. The script, which has her name printed in huge letters on the front of it, appears to be written by Kevin Williamson and Julie Plec, making the finale a full on reunion of original The Vampires Diaries cast and crew.

TVLine reported way back in Aug. 2016 that Dobrev was in talks to return to The Vampire Diaries, following news that the series was ending for good with Season 8. According to The Hollywood Reporter,

Dobrev's return should come as little surprise. When the actress exited The CW drama two seasons ago, the deal included a clause that she could return for the series finale.

It is definitely a relief to hear that the show's original star is returning to wrap the series, since it would feel wrong to end the story without Dobrev present.

When we last saw Elena in Season 6, she went into a deep, deep sleep, because of a powerful spell that endangered her bestie Bonnie. Elena basically sacrificed herself, and it'll be exciting to see how the show handles her return.

The Season 8 finale of The Vampire Diaries airs on Friday, March 10, on The CW.

More like this
Here’s Why Danny Masterson’s Hyde Isn’t In 'That '90s Show'
By Brad Witter
'Abbott Elementary' Fans Probably Missed This 'Parent Trap' Easter Egg
By Sam Ramsden
At 28, Debra Jo Rupp Was Living A Much Different '70s Show
By Grace Wehniainen
Raven-Symoné Addressed Fan Pushback To Her Name's Actual Pronunciation
By Stephanie Topacio Long
Get Even More From Bustle — Sign Up For The Newsletter
From hair trends to relationship advice, our daily newsletter has everything you need to sound like a person who’s on TikTok, even if you aren’t.