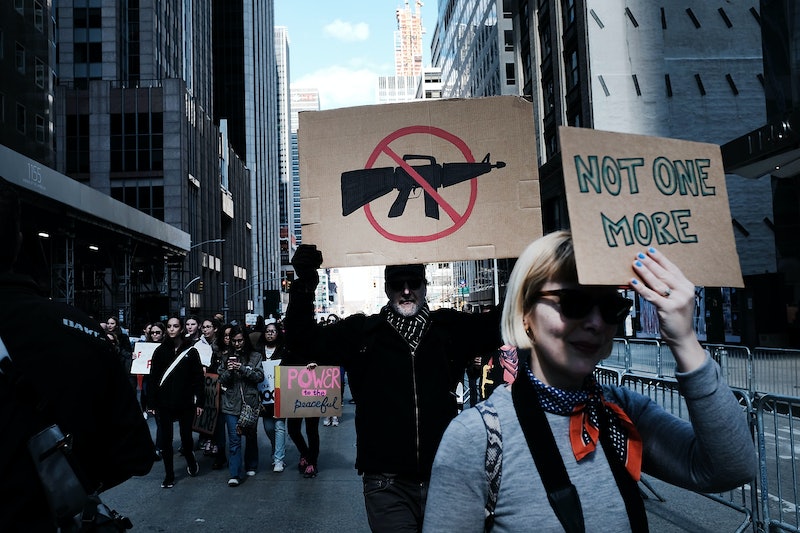 In the wake of a series of mass shootings in the United States — especially the February massacre at a school in Parkland, Florida — much of the nation's attention has recently focused on the National Rifle Association and its decades-long efforts to impede gun control. Fierce arguments about the NRA have been flying around Twitter among liberals about how to understand the organization's power and most effectively defy it.

Everyone has a hot take, of course. Some say that the NRA's current influence is overstated. Some say that it still holds most of the blame for the gun debate's intractability. Some believe that the association can best be fought with argument; others, with consumer activism; still others, with rallies and protest.

One thing seems to be certain: Gun control activists are more motivated right now than they have been anytime in recent memory. A recent NPR/PBS/Marist College poll showed that 53 percent of Democrats will weigh candidates' stances on gun control as a "major factor" in how they'll vote in upcoming elections. Forty-four percent of Republicans said the same. Stricter gun laws also have solid bipartisan support: 60 percent of everyone surveyed said that they would vote for a pro-gun control candidate.

The country seems ready for increased gun control measures — but it's one thing to want these and another to obtain them. So, to help illuminate the path forward, here are some incisive tweets about the NRA that delve into the nuances of the gun debate.

On Framing The Debate

The NRA is notorious for refusing to contemplate even the smallest of gun control measures. Vox reporter Jane Coaston notes that gun rights activists often have "a feeling that if you give an inch [to gun control advocates], you'll lose a mile." Passing gun reform would be easier if the terms of the debate were changed so that even minor reform measures weren't thought to lie on a slippery slope.

"The terms of the gun debate have become so extreme that ... there's no many more 'rights' to argue for," Marshall, founder of Talking Points Memo, continued. "Whatever the merits of particular merits of an argument, any defeat for guns is a defeat for Trump, the flag, the police, traditional families, racial order and all the rest."

On The Source Of The NRA's Power

When discussing the NRA's power, people often focus on the donations that the association gives to political candidates (for example, President Trump received more than $21 million during his presidential campaign) and how this discourages officials from voting against the association's agenda.

But that's only part of the problem. Many argue that the association's real power comes from the wide network of far-right activists it's assembled. It knows how to mobilize these members to get them to campaign and vote for politicians who will adhere to NRA priorities.

On Corporate Sponsors Cutting Ties With The NRA

In late February, a number of companies — including Hertz, United Airlines, Delta Airlines, Enterprise, Best Western, and MetLife — decided to end their partnerships with the NRA. Many of these corporations offered discount programs and other perks to association members.

On Race And The Gun Debate

Although much of the gun reform conversation focuses on mass shootings, individual deaths — including those from suicide and police brutality — are also part of the epidemic of gun violence. NRA President Wayne LaPierre has often said that "to stop a bad guy with a gun, it takes a good guy with a gun."

But as pundit Cenk Uygur points out, the NRA never uses this assertion to argue that people of color should carry guns to protect themselves from police brutality. "How come the NRA never said that this tragedy could have been avoided if Trayvon had just been armed?" he also wrote.

Philando Castile, a 32-year-old black man, was shot and killed by police in 2016 after an officer pulled him over for a routine traffic stop. Because Castile was a legal gun owner and had his firearm on him at the time, many racial justice activists argued that the NRA should defend him (the organization did not).

Gun rights activists often argue that conversations about gun laws shouldn't be had in the wake of mass shootings. Instead, they say, conversations in the aftermath of those tragedies should focus on mourning the victims. After the shooting in Las Vegas last October that left 58 people dead, White House Press Secretary Sarah Huckabee Sanders told reporters: "There will certainly be a time for that policy discussion to take place, but that's not the place that we're in at this moment."

But that argument falls apart when it comes to Parkland students. You can't say that we must only discuss the victims when the victims themselves are saying that it's an appropriate time to talk about gun reform.

Harlon Carter was elected to be the NRA's executive vice president in 1977 and helped shift the organization's focus "from hunting and sport to an obsession with self protection and vigilantism," according to Timeline. Carter shot and killed a Hispanic 15-year-old when he was 17. He went on to lead the U.S. Border Control and the Immigration and Naturalization Service (an earlier form of ICE) before eventually ending up at the NRA.

"I think the role of the NRA had a heyday and demanded more respect in understanding what was going on 10 years ago than in what's going on now," historian Jill Lepore told the FiveThirtyEight podcast. "I think today much of the role of the NRA is largely mythical and it plays the same kind of bogeyman role in the left that Planned Parenthood plays in the right." She argued that we should instead aim for "a much broader understanding of a continuum of political opinion" instead of "sort[ing] people into 'Are you pro- or anti-NRA?'"