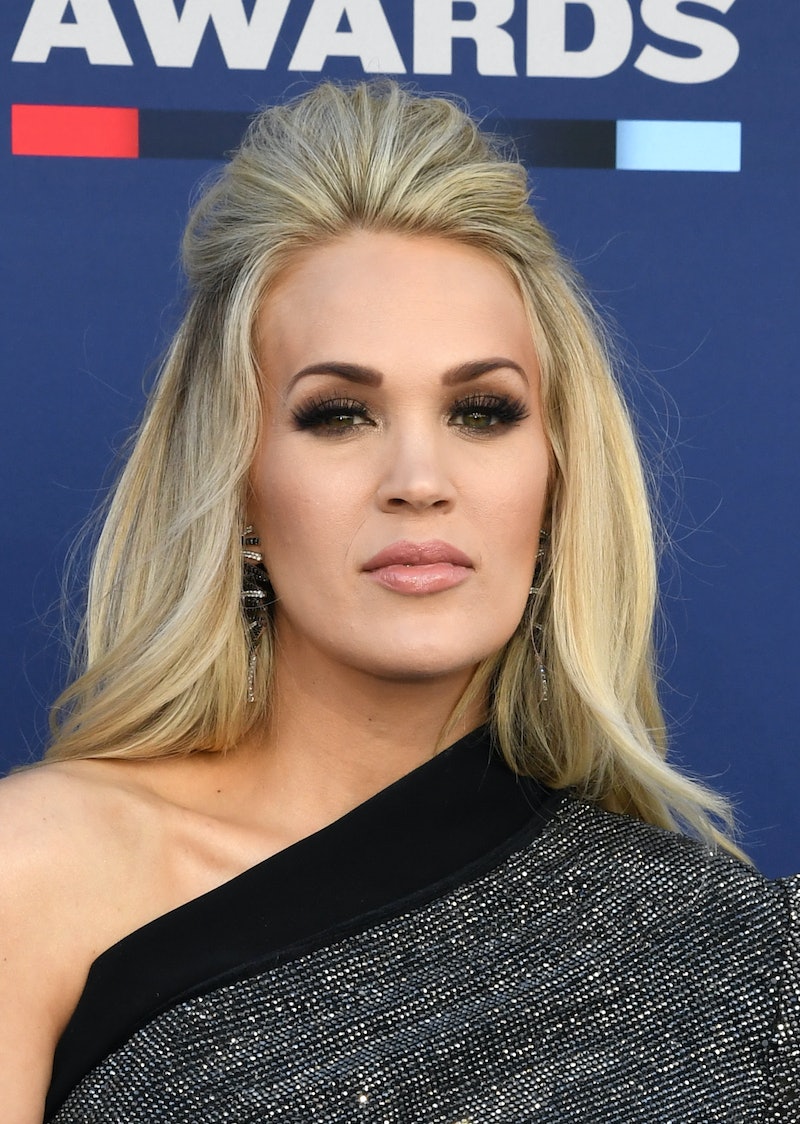 UPDATE: Carrie Underwood was previously tagged in the Instagram post below, but the tag has since been removed. Additionally, Underwood’s reps have reached out to Bustle to confirm that the singer is not in the photo.

EARLIER: A huge chunk of the world can have a person think that celebrities are other-worldly creatures. In actuality, famous people are still people with everyday challenges to overcome. Carrie Underwood just got a new tattoo, and it’s great inspiration for anyone going through the motions of life.

Believe it or not, tattoos are a form of art and Underwood has gifted herself with a piece small enough to fit on her finger. Literally. The singer approached celebrity tattoo artist Jonathan "JonBoy" Valena for her new minimalist artwork and got the word “Faith” put on the inner side of her middle finger in small script lettering. JonBoy posted the photo of his work on Underwood’s hand, captioning the photo with his definition of the word faith: “complete trust or confidence in someone or something.”

Ironically enough, the pairing of the tattoo artist in question and Underwood as the client is kind of (no pun intended) a match made in heaven since JonBoy, himself, explained he used to be a youth pastor prior to his celebrity clientele and Underwood has often opened up about that her faith in several interviews.

Underwood hasn’t shared anything yet about the tattoo’s meaning, but the singer has been through personal complications over the last few years that warrant her a little faith tattoo.

The singer and songwriter has overcome a lot of life changes that any non-famous person could find themselves in. Towards the end of 2017, Underwood experienced an impactful fall outside of her home while walking her dogs that resulted in the singer breaking her wrist and having to get over 40 stitches in her face.

After taking a hard tumble, Underwood explained in an interview with CBS Sunday Morning that she'd began actually questioning her faith when experienced three miscarriages throughout 2018.

“I was like, ‘Why on Earth do I keep getting pregnant if I can’t have a kid?’ ” Underwood said in her CBS Sunday Morning interview. “ ‘Do something. Either shut the door, or let me have a kid.’ For the first time, I feel like I actually told God how I felt. And I feel like we’re supposed to do that.”

Surly enough, Underwood and her husband Mike Fisher's prayers were answered as the couple had their second son, Jacob Bryan Fisher in January of 2019.

Underwood doesn't have many tattoos, so when she does show one off, it's a pretty big deal. And interestingly enough, the tattoos have everything to do with luck.

Despite the fact that celebrities are the trailblazers for cool new tattoos, Underwood only has two other tattoos. One of them is reportedly a black cat and the other is a four-leaf clover, which Underwood said in a HuffPost interview that the tattoo has since faded since Underwood's C-section.

"It’s not really a four-leaf clover anymore; it’s a multi-leaf," Underwood explained. "It doesn’t match up with the top! And I think most people deal with this after a C-section, there’s like a little pooch over the scar. It’s something that I’m probably going to have forever”.

Fans of Underwood are beginning to see the star shine again since her return, and with a little luck and faith on her side, they'll be seeing a lot more of the singer. And hopefully more of her meaningful minimalist tats.