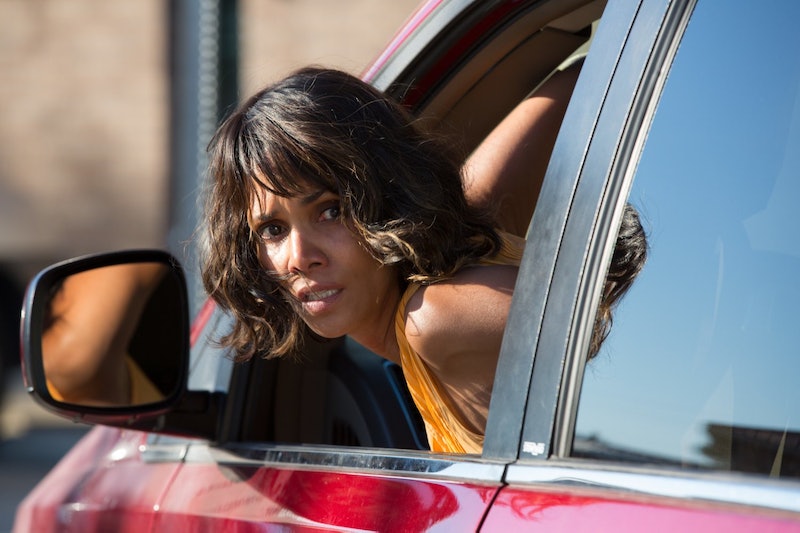 "You took the wrong kid," Halle Berry's character, Karla, passionately declares in the upcoming movie Kidnap. The intense, action-packed movie, out Aug. 4, follows a single mother trying to rescue her son, Frankie, after he gets kidnapped. To some, this might sound similar to Liam Neeson's 2008 movie Taken, but while chatting with Bustle, Halle Berry assures me that Kidnap isn't just a female Taken.

"What makes this movie different is you have a woman, you have a mother who is saving the day, and she does it in her own feminine, everyday mother way," Berry tells me over the phone. "Liam Neeson was this trained assassin. He’s a man. He’s got his sensibilities. And in this you get to see how a woman would save the day, and I think that makes it vastly different."

The 50-year-old actor says that Kidnap and Taken are similar in the way that "many movies are similar to other movies," but she makes the differences clear.

"We look to typically, ‘Dad saves the day.' Like, there’s danger, call dad, but I happen to know that’s not true," Berry says. "Women are often the pillars of their family and they’re the ones who handle so many aspects of family life, and I really feel like if you put a mother’s child in danger, I think there’s no limits to what she would do. Now, she might die trying, but there you go. There’s no limit that she wouldn’t go to try to save her child, and that’s our star of this show, Karla."

Berry recognizes that far too often there are certain limitations put on women, including when it comes to mothers and their capabilities. Just like Neeson demonstrated in Taken as a father who pursued his daughter's kidnappers, audiences will get to see Karla do the same.

As both a woman and a mother of two children, Berry was attracted to Karla for a number of reasons, but the way her character is presented drew her in immensely. From start to finish, Karla endures high-speed car chases (in a mini-van), doesn't avoid blood, cuts, or bruises, and puts herself in risky situations for the sake of her child. "I liked it because the movie sort of signifies female empowerment," Berry says.

Karla's journey affected Berry greatly when she first took a look at the story. "Well, I think as a mom, when I first read this script, it was horrifying," she says. "I mean, my worst nightmare was now written on paper. To think that you could see your child snatched close enough to see them, but too far to do anything about it was just, I think, probably the most frightening thing a parent could experience."

Knowing what it's like to be a mother who would do anything to protect to her children contributed to Berry's performance. "I knew that I would have all the emotions on the ready to create the character, because it’s so real for me."

Naturally, Berry's own kids' safety is something she thinks about a lot. But she takes things to the next level by doing physical training specifically to be prepared if her son or daughter ever need saving.

"I do [hand combat training and martial arts] to be, you know, I have two kids and I always want to be prepared for whatever situation I might get into," she says. "I want to be able to know I can carry them out of a fire, I can save them if they’re drowning, I can defend them if someone attacks us. I want to have a fighting chance. So, I always try to stay up on all kinds of forms of self-defense in order to protect my kids and myself."

Berry shows off a few of her fighting skills as Karla, but it's important to note that Karla isn't only a badass, she is also vulnerable. When her fears and emotions are put on display, it makes the character whole.

"I feel empowered by that," Berry says about playing a multidimensional female character, "because what I think I do onscreen, yeah, it might be badass, but I think it’s what every mother would do." She adds, "It’s really just celebrating more of what’s inside every mother, every parent, being man or woman, actually, but especially the heart of a mother."

The way Kidnap puts a single mom at the front and center of its story is something Berry appreciates. "I love that this is an everyday, ordinary mom, who, when the chips were down, a hero was born within her, because she had to save her child. It just speaks to the love of a mother and how far mothers will go."

Basically, don't ever underestimate moms — both Karla and Halle included.