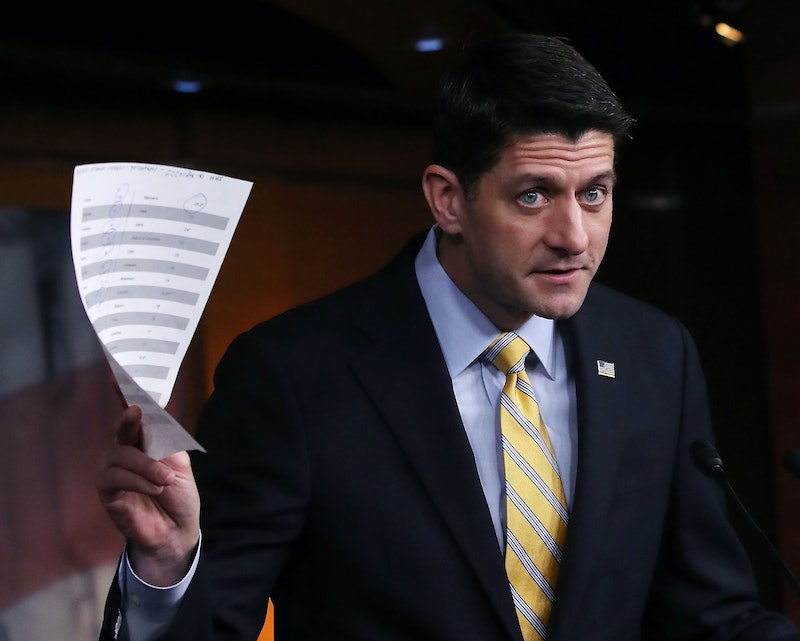 In a Thursday CNN Town Hall, House Speaker Paul Ryan proposed that instead of funding Planned Parenthood, the government should fund federal community health centers. His reasoning behind this is that Planned Parenthood, a nonprofit that provides reproductive health services, is the United States' largest single provider of abortions. Unfortunately, Ryan is ignoring some crucial facts about the two types of care providers.

Nonetheless during the town hall, Ryan suggested Planned Parenthood and federal health centers were nearly equivalent after one attendee asked, "if Planned Parenthood is defunded, where will millions of women, low income groups, and people like myself go?" Ryan referred the attendee to federal community health centers, claiming that both patients and funding could be shifted in that direction to avoid the "controversy" of funding an abortion-providing organization. After CNN's Jake Tapper's pointed out that Planned Parenthood isn't allowed to use federal money to pay for abortions, Ryan muttered, "Money's fungible, and it effectively floats these organizations."

In fact, the vast majority of the non-profit's services are related to basic reproductive healthcare needs, such as birth control, screening for and treatment of sexually transmitted illnesses, and cervical cancer screenings. In 2013, only around 12 percent of the non-profit's clients got abortions, and since clients can receive more than one service, only three percent of Planned Parenthood's services were abortions, according to the non-profit's annual report. Close to half of the organization's locations don't even have the facilities to provide abortions.

But I'm tired of using the "Planned Parenthood doesn't provide that many abortions" argument to defend the organization. During the town hall, Ryan said, "We want to make sure that all women get the care that they need." Well, sometimes that care involves getting an abortion. And Planned Parenthood goes beyond providing reproductive healthcare; it's also an explicit political advocate for reproductive rights. According to the organization, "PPFA believes that reproductive self-determination must be voluntary and preserve the individual's right to privacy." As in, your body is your body, so you get to decide what to do with it, and Planned Parenthood supports you in this.

Planned Parenthood is also the only place where people in 103 U.S. counties can get publicly-subsidized contraceptive services, according to the Guttmacher Institute. Not to mention that it takes three to five days longer for patients to see "other types of safety-net providers," than it does to see Planned Parenthood, the same institute reported. And when it comes to matters of health, seeing a healthcare provider sooner rather than later is often incredibly important.

But let's say it's possible to move funding and patients over to federal community health centers. Defunding Planned Parenthood still seems hypocritical considering that Ryan's website says that under his Patients' Choice Act, "patients and doctors would control their health care decisions - not insurance companies and federal government bureaucrats." By working to defund Planned Parenthood, Ryan and other lawmakers are trying to take away our choice to use Planned Parenthood's healthcare services — just like they're working to get rid of the right to choose how to deal with our own bodies.

What I would like to say to Ryan is this: if you don't want to have an abortion, don't have one. If you don't want to go to Planned Parenthood for your healthcare, don't go there. Don't take away our choices while pretending you're protecting our right to choose. Because you're not. And no, federal community health centers will never replace Planned Parenthood for the millions of Americans who choose to use its services.