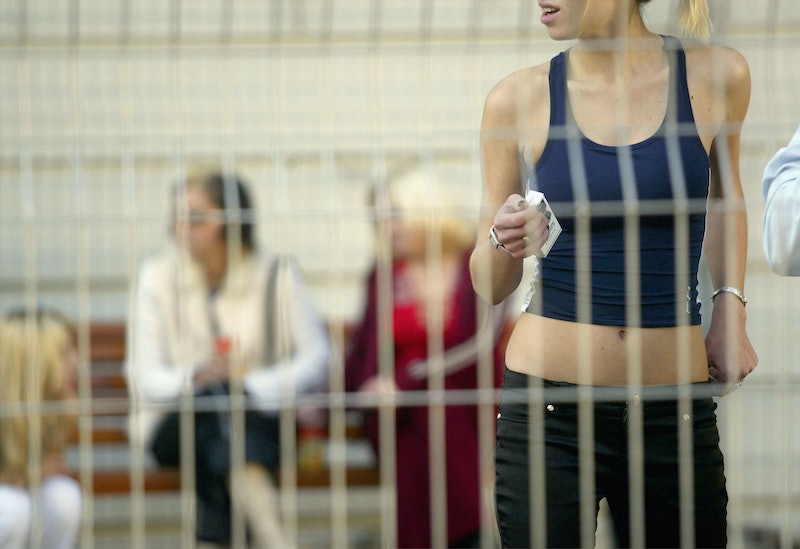 For pretty much everyone who menstruates — and that's half the population — periods are a huge hassle. However, for the more than 200,000 women incarcerated in the United States, periods quickly go from an inconvenience to a harrowing ordeal.

Topeka Sam, an activist who was incarcerated in federal prison after pleading guilty to a conspiracy drug charge, experienced this first hand. Sam was diagnosed with uterine fibroids during her incarceration, which required her to undergo surgery in shackles. After the surgery, she had heavier than usual flow, but the prison would not supply her with additional feminine hygiene products. "They told me that I had to quantify my period, which meant I had to give them the soiled pads," Sam says. She had to keep the used pads in her cell until a guard could inspect them.

"They would only give me a certain amount of pads per week," Sam says. "And I said, 'well can I have like a HAZMAT can or something?' and they said no."

"They told me that I had to quantify my period, which meant I had to give them the soiled pads."

Sam eventually got a doctor's prescription for overnight pads to help with her heavy flow, but most women in prison are left with fewer choices: save their pennies to buy sanitary products in the commissary, or ask prison guards — who are often men — for the pads and tampons they need. While prisons provide sanitary products to female inmates, formerly incarcerated women say they're often scarce and of poor quality.

Sen. Cory Booker wants to solve this problem at the federal level. A new bill Booker is co-sponsoring with Sens. Elizabeth Warren, Kamala Harris, and Dick Durbin, called the Dignity For Incarcerated Women Act, would provide pads and tampons to federal prisoners for free, something reform activists say could be a huge step forward for preserving prisoners' humanity.

"Most folks don't understand that so many women are being incarcerated are coming from environments that are not stable, that they are again survivors of violence, they might come in with an addiction," Sen. Booker tells Bustle. "So now you're struggling to recover from an addiction, you're going through withdrawal, you have no resources, you have no support system and you're struggling and all of that, and now you can't even buy soap, toothpaste, sanitary products."

Currently in the U.S., women in federal prisons have inconsistent or limited access to pads and tampons for a variety of reasons. Supply chain management is a common culprit, according to prison reform advocate and former inmate Chandra Bozelko, and sometimes even the products inmates pay for don't make it to them.

“I think Orange Is the New Black has made it seem like commissary is a store, or a physical place where you can go and walk away with an item, but actually, it’s a very long process,” Bozelko told Women's Health. “You have to place an order a week ahead via a slip, and if there’s a mistake anywhere along the way, which is fairly common, you just don’t get your items."

"You’re going to end up trading sex for sanitary napkins."

"Working inside of a prison, you only get 12 cents an hour," says Tiheba Bain, who served a ten-year sentence in federal prison after pleading guilty to a violent crime. "As well as trying to figure out how we are going to pay for sanitary napkins, are we going to pay for... phone calls, we have other stuff that we have to address," Bain says. "We don’t get soap, we don’t get dishwashing liquid, toothpaste. So we have to pay for all that."

Endemic poverty in the prison complex makes it difficult for women to afford the sanitary products they need, according to the Prison Policy Institute. Seventy-two percent of incarcerated women lived below the poverty line before entering prison, meaning they don't have resources to afford the costly goods available for sale within the prison walls.

Jobs on the inside, which are scarcely available in the first place, typically pay only a few cents per hour, so a box of tampons that costs a few dollars can eat through a huge portion of an inmate's paycheck. Along with other necessities and costly phone calls home, the bill's co-sponsors say this creates a painstaking Catch-22 for inmates having to choose between maintaining basic hygiene and keeping in contact with their support system.

Incarcerated women have turned to desperate measures to access the products they need. Brenda V. Smith, a law professor at American University, told HuffPost that it's not uncommon for women to give prison guards sexual favors in exchange for period products. “If you have to pay for [pads and tampons], and you actually don’t have any money, then what’s going to happen is that you’re going to end up trading sex for sanitary napkins,” Smith said.

That's a harrowing example of the kind of re-traumatization that Booker says he hopes his new bill would curb. A majority of female inmates have suffered from substance abuse or sexual violence before prison, trauma that can be worsened by the dehumanizing conditions within the prison walls. According to a 2002 Bureau of Justice Statistics report, 52 percent of women entering prison self-identified as dependent on drugs or alcohol. The Correctional Association of New York, a prison reform non-profit, found that 75 percent of female prisoners have been abused by a partner and 82 percent suffered from sexual or physical abuse as children.

The indignity and humiliation of not being able to afford self-care during menstruation can bring back some of those traumas, and inmates' time in prison should be rehabilitative, not scarring. Providing sanitary products for women is an essential part of the bill's ethos — that women's full humanity should be respected while they are under the care of the federal correctional system.

The Dignity for Incarcerated Women Act would improve female prisoners' living conditions at the federal level, and Sen. Booker says he hopes that this legislation would set a precedent for other jurisdictions to institute similar policies.

"You're taking people who are already been traumatized, who have faced abuse, and you're putting them in an environment that is not a continuum of care, helping them deal with their addiction or their trauma, but is actually re-traumatizing them where they're just struggling to stay afloat," Booker says.