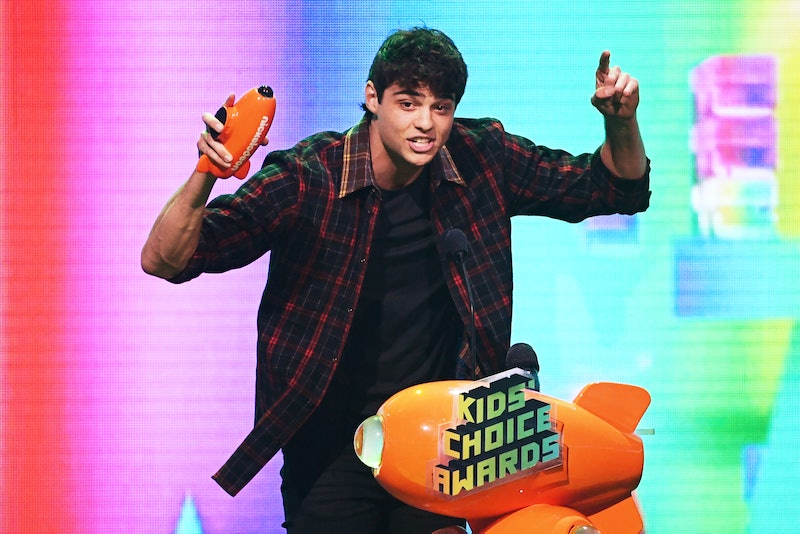 To all the speeches given before, it's going to be hard to top the one given by Peter Kavinsky. On Saturday, March 23, Noah Centineo gave a Kids' Choice Awards speech that had an important message about bullying, according to Variety. Centineo took home the "Favorite Movie Actor" award for his role as Peter Kavinsky in To All the Boys I've Loved Before. The win shouldn't come as a surprise, because the the movie was a major hit for Netflix. The actor used his win as an opportunity thank his costar Lana Condor, TATBILB author Jenny Han, and include an important message for fans about treating each other with kindness.

Nickelodeon's 32nd Annual Kids' Choice Awards took place at USC's Galen Center in Los Angeles. DJ Khaled hosted the uplifting event, which offered plenty of inspiring messages for young viewers. Centineo's acceptance speech kept the awards show positive, and the star took the chance to encourage young people to speak up if they witness bullying. "It's 2019, bullying is not something that should exist anymore. Please do not sit on the sidelines," he said. "You see someone getting bullied, stand up for them. Stand up for each other. This is your world."

Centineo's acceptance speech was not the only one to address the issue of bullying. JoJo Siwa won "Favorite Social Media Star," and used her speech to discuss online bullying. She said:

It's not surprising Centineo chose to address bullying at the awards show since the message was emphasized throughout the evening. In the past, the actor has been an outspoken anti-bullying advocate. In January, Centineo released ARTY's "Save Me Tonight" music video, which he directed and starred in alongside Lily Collins. The music video tells the story of a high school student who moves, and is bullied at her new school. After a group of bullies dump a garbage can on her head, she finds a group of friends who cheer her up and stick up for her.

In September of 2018, Centineo discussed his own experience with school bullies in an interview with Young Hollywood. "In eighth grade I underwent my own version of bullying, and when I went into high school it really changed who I was," he said. "I was really outgoing in the earlier years of middle school and then by the end of it I was like 'people suck.' I'm just going to put my hood up in the back of class and not pay attention. It was more of a survival technique." The star noted that it took a lot of work to overcome his insecurities and regain his self-confidence after high school, and he's now using his platform to prevent other kids from having similar experiences.

Centineo took advantage of his win at the Kids' Choice Awards to try and do his part to stop bullying. Given his own experience, his speech was a particularly poignant part of the awards. It's a meaningful message for young fans, and the actor will likely continue to promote an anti-bullying message in the future.

More like this
Netflix Reveals First Look At Wednesday In The 'Addams Family' Spinoff Series
By Bustle Editors
9 Movies & TV Shows That Prove Stanley Tucci Elevates Everything He’s In
By Jake Viswanath and Radhika Menon
Paul Mescal, Man Of Mystery
By Samantha Leach and Heather Hazzan
Lindsay Lohan & Jonathan Bennett Celebrated Mean Girls Day Very Differently
By Jake Viswanath
Get Even More From Bustle — Sign Up For The Newsletter