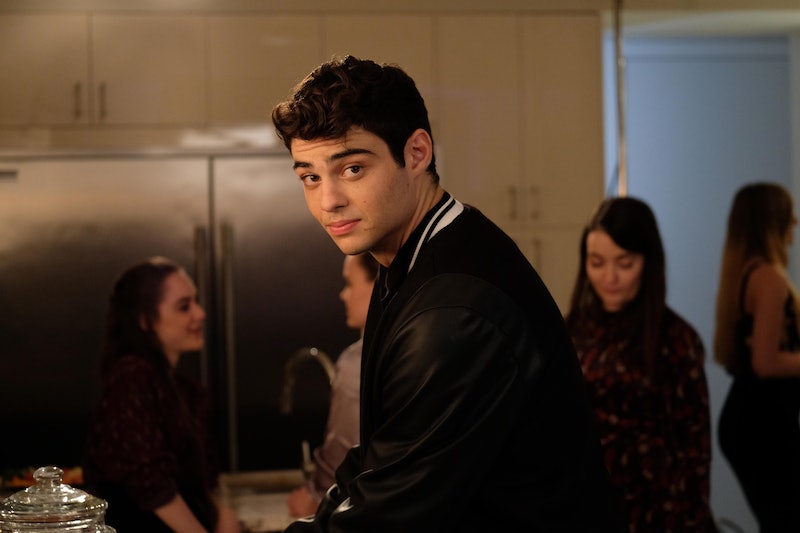 To All The Boys I've Loved Before may have put him on your radar, but the trailer for Noah Centineo's new Netflix rom-com proves that the actor really is the perfect date in more ways than one. In fact, that's actually the title of his new film, The Perfect Date, which is scheduled to debut on the streaming platform on April 12. So if you thought you were done swooning over Centineo's charms, think again, because yes, he really is that charismatic — and it's a trait that pretty much the entire premise of the movie is based.

In The Perfect Date, Centineo stars as Brooks Rattigan, a high schooler who dreams about going to Yale and dating the most popular girl in school. The only problem is that he doesn't have the money or the means to see these aspirations come to fruition. “I’ve always wanted to date the most popular girl, drive the nicest car and go to the fanciest school. But I can’t afford any of that,” Centineo's character laments in the trailer. So he comes up with a brilliant idea: in order to make some extra cash, he starts offering himself as the perfect stand-in boyfriend to any girl who needs or wants to be chaperoned around for an evening. (Think of him as the ultimate "plus-one.") And it seems to go off without a hitch, at least at first.

The idea starts when Brooks overhears a guy talking about how his uncle is paying him to escort his cousin, Celia Lieberman (Laura Marano) to a semi-formal. Brooks immediately offers to take his place so long as he still gets paid for his services. It's during that date that Brooks realizes what a goldmine this could be for him, so he sets up an app that allows girls to call on him when in need of an escort. "Did you know Michelle Obama got paid to go on a date with Barack and look how great that turned out," Brooks is shown saying to a friend in the clip. But just as business starts to boom, Brooks starts to question everything that he thought he wanted.

Obviously, there's going to be a little love triangle that forms between Brooks, Celia, and Shelby, the girl of his dreams, played by Riverdale star Camila Mendes. But that's the thing about dreams — sometimes the reality isn't what you expected and maybe what you really want has been staring you in the face all along.

So who does Brooks end up choosing in the end? Does he earn enough money to go to Yale after all? How will his plans for the future change after this whole experience? Those are all questions that the trailer fails to answer. Interested parties will just have to watch the movie in order to see how it all plays out. But one thing's for sure — Centineo was destined for this role and continues to be the ideal boyfriend for all our rom-com fantasies.