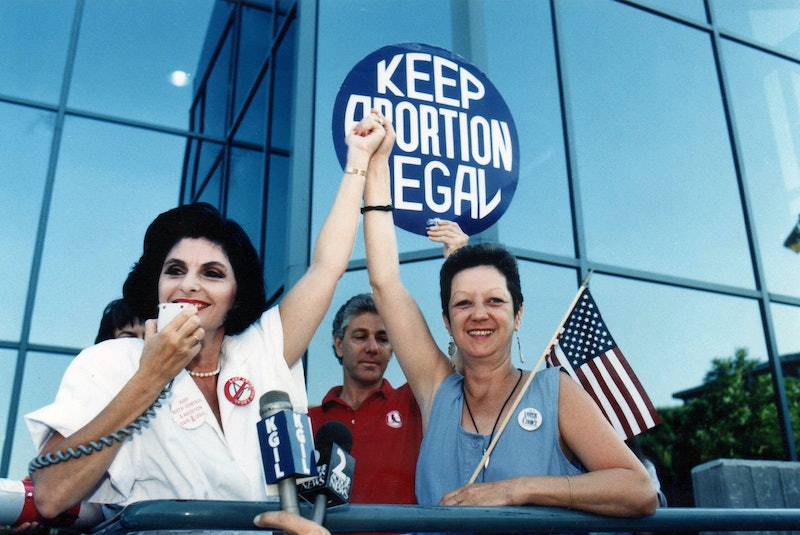 The woman behind the pseudonymous plaintiff Jane Roe in the Supreme Court case Roe v. Wade has died, according to a report from the Washington Post. Norma McCorvey died Saturday at the age of 69 in Katy, Texas from an unspecified heart ailment, the newspaper reported.

At the time of her death, McCorvey was reportedly living in an assisted-living facility. Her death was first confirmed to the Washington Post by Joshua Prager, a journalist currently working on a book about the landmark Roe v. Wade decision.

In a landmark decision handed down in 1973, the Supreme Court ruled 7-2 that a person's constitutional right to privacy included a woman's decision to have an abortion. The ruling also established what has become known as the trimester framework in an effort to balance a woman's right to bodily autonomy with the states' desire to protect the unborn. The initial lawsuit which eventually led to the Supreme Court's Roe v. Wade decision was filed in Texas in 1970 by McCorvey. At the time McCorvey was looking for the right to safely and legally terminate an unwanted pregnancy she initially claimed, but later recanted, had resulted from rape.

According to the Washington Post, although McCorvey's lawsuit would eventually result in a historic turning point for women's reproductive rights, it did little for her particular situation. Due to the length of the appeals process, McCorvey was forced to carry her pregnancy to term. She opted to put the child up for adoption.

For abortion-rights activists McCorvey, who outed herself as the pseudonymous plaintiff Jane Roe in the 1980s, was a complex and enigmatic figure. After working in abortion clinics and serving as a sort of poster child for abortion rights, McCorvey became a born-again Christian and a staunch pro-life supporter in the mid-1990s. "The poster girl for pro-choice has jumped right into the arms of Jesus," Operation Rescue leader Flip Benham, the man credited with converting McCorvey, reportedly said during an interview about her change of heart on Good Morning America in 1995.

"Upon knowing God, I realized that my case, which legalized abortion on demand, was the biggest mistake of my life," McCorvey said in a 2013 pro-life television ad for Virtue Media.

Yet some have argued McCorvey's decision to join the pro-life camp stemmed more from a desire to feel special than from authentic regret. When McCorvey came forward as Jane Roe she revealed a different story than that which had been used to argue Roe v. Wade. The pro-choice movement soon began to distance themselves from her, a move some argue spurred her to turn to pro-life groups.

But McCorvey may not have found the acceptance she was looking for. "Neither side was ever willing to accept her for who she was," historian and author of Liberty and Sexuality: The Right to Privacy and the Making of Roe v. Wade David J. Garrow told the Washington Post.

However she felt about the issue of abortion, it's clear McCorvey was an immensely complicated woman whose actions led to a watershed moment for American women.