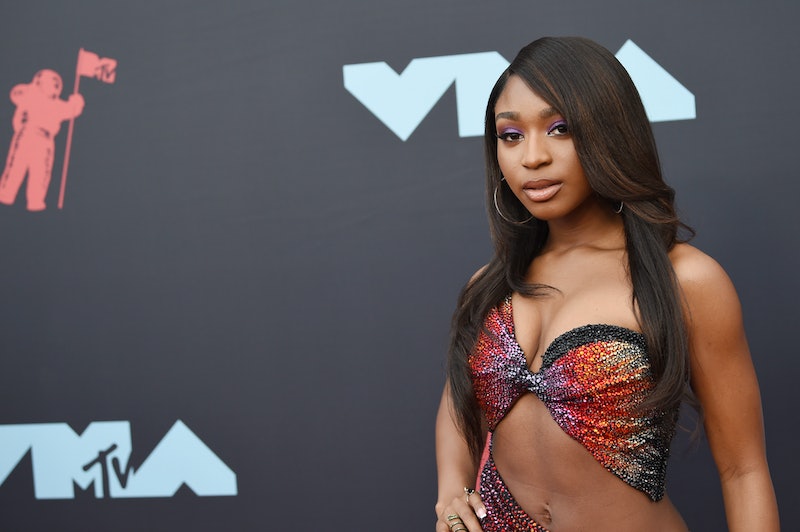 It's a huge night for former Fifth Harmony member Normani. She is performing at the MTV VMAs, and it's a moment that Harmonizers and beyond have been waiting for. However, she made a splash before the broadcast even started. Normani's 2019 VMAs outfit brought all of the sparkle to the red carpet. The singer, who will perform her new single "Motivation," turned up in a sparkling two-piece ensemble by Nicolas Jebran. It featured red, gold, black, and purple shimmer woven throughout. Ultimately, Normani looked like the edgiest and coolest mermaid you've ever seen. Her top was bikini-like while the bottom was a skirt that featured the sickest high leg slit. The singer perfectly matched this huge professional appearance with a statement look. Normani has indeed arrived.

Normani also matched her makeup to her outfit. She rocked rich and royal purple eyeshadow all over her lids, while an ever-so-sheer wash of crimson accented her brow bones. She added pops of metallic shimmer in the inner corners for extra oomph. She finished her makeup look off with glowing skin and nude, glossed lips.

Normani wore her long, black hair blown straight with a deep side part and face-framing layers. Her coif had a decidedly '70s, Farrah Fawcett vibe and she crushed it. Since her skirt showed off her legs, Normani opted for a pair of red, skinny strap stilettos. Her footwear picked up some of the red sparkle in her outfit. It was all about the subtle details for Normani at the 2019 VMAs.

In this shot, you can see the golden highlights in Normani's mega mane. Those glints also spotlighted some of the golden glimmer in her top. Who needs the stars in the night sky when you can rock an sparkling outfit such as this? She also went with minimal accessories so that nothing competed with the texture of her dress. She ditched necklaces and bracelets in favor of giant hoop earrings, which are also having a moment right now. If you take a closer look, you'll notice that snake ring wrapping itself around her finger.

So, yeah, Normani served up a look. Her confidence was apparent on this night of major magnitude in her solo career. Of course seeing her slay on her own might make you miss her appearances and performances with her former bandmates. But she has stepped out into the spotlight and deserves all the success she is experiencing with "Motivation."

For her performance, Normani rocked some serious athleisure. She wore a purple velour two-piece that consisted of a crop top and a skirt that bore the name of her single. The outfit was perfect for singing and dancing, as were her dad sneakers.

Here's a throwback to Fifth Harmony at the 2017 VMAs after Camila Cabello exited the group in order to pursue her solo career. It seems like so long ago that the band was doing its thing in metallic stage outfits. You'll notice that Normani really does like go bold at each of her VMAs appearances.

Ah, the way they were. Remember when Fifth Harmony were actually a five-piece and appearing at the 2016 VMAs? Perhaps the group will eventually, well, regroup. But for now, all of the singers are pursuing other interests and solo careers. Whether together or apart, they are all majorly talented and they all strut their fashion stuff in unique ways at events like the VMAs.