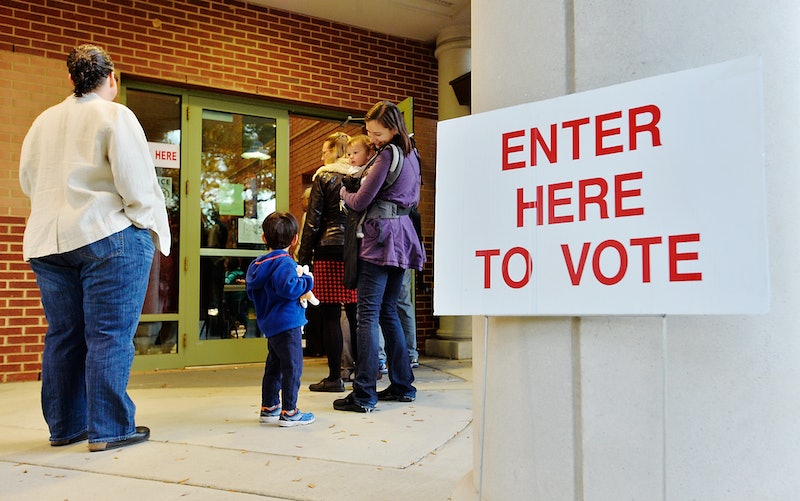 More than three weeks have passed since Nov. 6, but the midterms still aren't quite over. Allegations of widespread voter fraud mean that North Carolina's 9th congressional district race still isn't certified, and it might not be for some time while officials investigate the claims.

The allegations focus on absentee ballots in Robeson and Bladen counties. Some voters are claiming that strangers knocked on their doors and pressured them to fill out one of these ballots, or in some cases, filled it out for them. Others say they were told to hand over their ballots to the strangers, who promised they would hand them in (it's illegal for a stranger to submit your vote).

"I filled out two names on the ballot," voter Datesha Montgomery wrote in an affidavit for the investigation, per The Washington Post. Montgomery said an unknown woman showed up at her doorstep and asked to take her ballot. "She stated the other [... races] were not important. I gave her the ballot and she said she would finish it herself. I signed the ballot and she left. It was not sealed up at any time."

The results as they now stand have Republican Mark Harris beating Democrat Dan McCready by 905 votes in the race to represent the state's 9th Congressional District, according to local outlet WSOC. But if there turns out to have been fraudulent activity significant enough to have possibly affected the race — if, for example, the number of tampered votes is greater than 905 — North Carolina's State Board of Elections can decide to hold a new election.

The Post reported that a State Board of Elections agenda on Friday showed "no plans to certify" the election. But Robin Hayes, the chairman of the North Carolina Republican Party, declared on Thursday that the board has "has a legal and moral duty" to certify it on Friday and that he will take "immediate court action" if that doesn't happen. "This madness must end tomorrow," he said.

In a statement Thursday, McCready said he hoped the board would hold a "full public evidentiary hearing" when the investigation finishes and before the results are certified.

"I support the bipartisan board's decision and its efforts to ensure our elections are fair and every voice is heard," he said. "I stand with voters all across the 9th District in wanting to make sure any wrongdoing is investigated and prosecuted regardless of the outcome of the election."

Some precincts reportedly requested large numbers of absentee ballots that weren't ultimately submitted, which is also unusual. "There are patterns that are at odds with behavior of North Carolina voters," election law analyst Gerry Cohen told The Post. "It's a whole series of suspicious events."

Bladen County experienced allegations of fraud in the 2016 election and in the May 8 primary, both of which also related to absentee ballots. In the primary, the incumbent Republican won 96 percent of Bladen's absentee votes but just over 69 percent of its vote overall, per The New York Times results. That nearly 30-point difference has had people calling the absentee results into question, according to The Post.

In an interview Thursday with Spectrum News, Harris distanced himself from the alleged fraud, per The Post. "It's been out there," he said of the allegations. "We were fully aware of it. There are some particularly unsavory people, particularly out in Bladen County, and I didn't have anything to do with them."