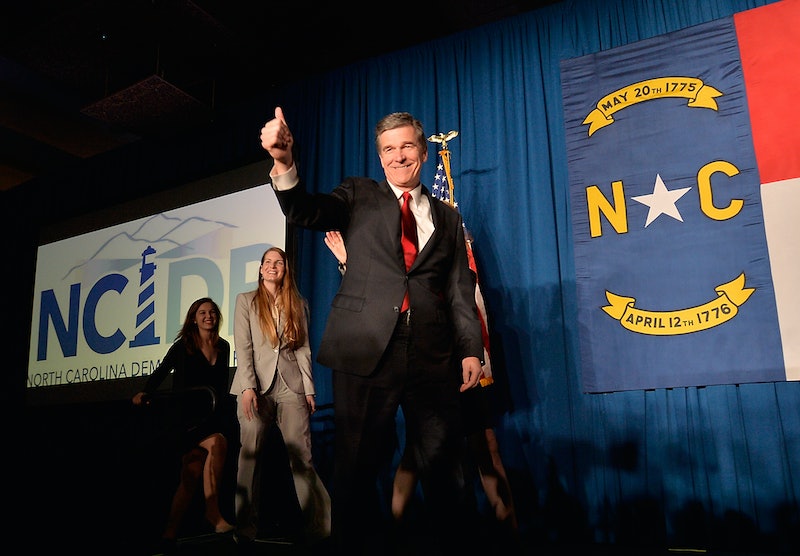 North Carolina Gov. Roy Cooper is planning to make good on a promise to reverse the damage done from his predecessor's infamous "bathroom bill." On Tuesday, at the Center for American Progress conference, Cooper announced he will soon issue an executive order for LGBTQ protections in North Carolina.

In the last year, North Carolina became the target of widespread criticism due to the bill known formally as HB2 that the country came to refer to as the North Carolina "bathroom bill." The controversial bill was passed under Gov. Pat McCrory in March 2016 and reversed a local law in Charlotte that extended some protections to the LGBTQ community. It also made sure that other cities could not pass similar protection laws. Most notably, the protection that was reversed was the ability for transgender people to use the bathroom of their choice, hence the bathroom bill nickname.

HB2 caused an uproar in the North Carolina community, as well as around the country. Not only would it allow discrimination against LGBTQ residents, it also was estimated that the state would lose nearly $4 billion in business. Probably most notably, the bill influenced the NCAA's decision to pull seven championship games out of the state, which could have brought a lot of money to North Carolina. Musicians canceled concerts in the state, and PayPal canceled plans for a facility in the state.

When Gov. Cooper was elected in November 2016, it was widely expected that he would work to pass a repeal of the law. Instead, in March 2017, North Carolina passed a compromise to repeal parts of the bathroom bill. However critics said the repeal did not go far enough and still left LGBTQ residents vulnerable. The compromise legislation still bars localities from passing nondiscrimination protections for the LGBTQ community.

Unfortunately, Republicans still maintain a supermajority legislature in North Carolina, and according to the Hastert rule, only the majority of the majority party can bring a bill to the floor for vote. This increased the difficulty of a bathroom bill repeal even making it to the floor for a vote, let alone passing. So, they were forced to compromise and ended up with a bill that sort of repealed HB2, but not enough of it to restore protections for LGBTQ people across the state.

According to the Hill, Cooper did not release any details about the upcoming executive order, but said it will be "comprehensive," and that it "will help with LGBT protections." In his speech announcing the executive order, Cooper also pledged to push back against discrimination in the state and champion voting rights and educational funding. Hopefully, Cooper's upcoming legislation will be a step in the right direction to reverse the bathroom bill's harmful effect on the state. Although he did not give details or specifics about the eventual legislation, it's good to know that it is still on his agenda to work on. Now, residents and reporters will need to keep Cooper accountable in following through on the executive order soon.