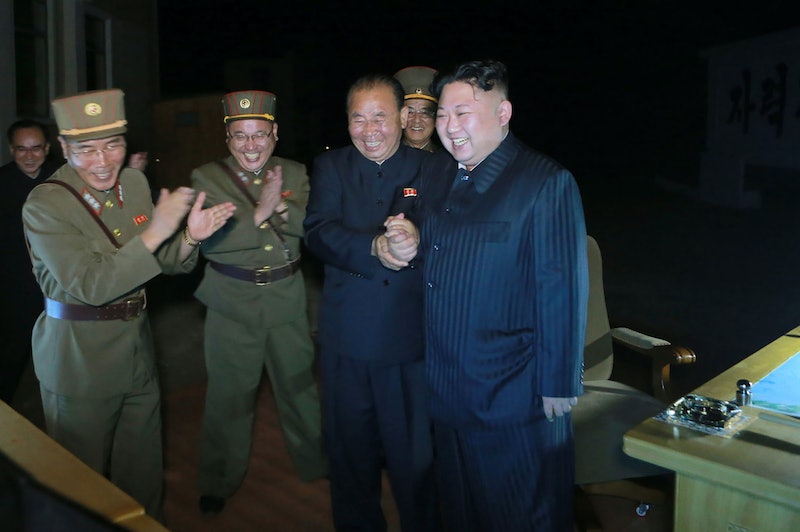 Tensions flared once again after North Korea claimed nuclear war "may break out any moment" on Monday. The statement arrived from North Korean deputy ambassador to the United Nations Kim In Ryong during an appearance at the international committee this week. Kim also boasted of the country's "full-fledged nuclear power" in front of his global audience, but national security and East Asia experts tell Bustle that there is reason to take North Korean threats with a grain of salt.

North Korea has a pattern of using provocative rhetoric to preempt potential military actions by the United States and to enhance unpredictability of its policy. This is not the first time that North Korea threatened with a nuclear strike, yet everyone, including North Korea, understands that [such a strike] will equate to its suicide [or] demise.

Yun may be referring to past incidents of aggressive rhetoric from the East Asian country. In August, the North Korean government issued an eyebrow-raising statement:

We will make the United States pay by a thousand-fold for all the heinous crimes it commits against the state and people of this country.

The harsh vow for vengeance arrived after the United Nations imposed sanctions on the country for testing intercontinental ballistic missiles in July.

A day after North Korea issued its statement, Donald Trump responded in similar abrasive fashion and said, "North Korea best not make any more threats to the United States" and that the country "will be met with fire and fury like the world has never seen."

In spite of North Korea's display of all-bark and no-bite rhetoric, there is still reason to be worried, according to Yun. "The new element this time would be Trump's upcoming visit. Presumably, North Korea would want to stop Trump from visiting The Republic of Korea and showing support." Reports indicate that the president could be visiting the demilitarized zone between North Korea and South Korea. "If [Trump] visits [the demilitarized zone], North Korea will likely retaliate with more provocation. But to launch a nuclear war is unthinkable and unlikely," Yun says.

[North Korea's] comments are part of the general deterioration in relations. So, it's more of the same, but that's bad. The North Koreans aren't going to attack the United States or South Korea. But they are likely to stage a provocation, whether it's another missile test or something worse.

It would come down to how the Trump administration reacts, according to Lewis.

The question is how Trump responds. I still don't think that it is likely that the United States will attack North Korea. I worry a little about the possibility that Kim Jong Un might misperceive Trump's bluster.

Verbal salvo aside, North Korea boasts a rather large amount of short-range and intermediate-range ballistic missiles. The range of the country's intermediate missiles can reach about 4,500 kilometers, which could potentially reach American military bases in Guam. Some reports caution against panic though, saying that North Korea would have to have a nuclear warhead small enough to fit on a missile.

In other words, the country needs to be skilled at miniaturization or the process of reducing an object's size. But analysts at The Defense Intelligence Agency claim that the country is already rapidly gaining expertise in miniaturization. For proof, analysts pointed to the country's intercontinental ballistic missile tests this year.

Although North Korea claimed that it tested a hydrogen bomb this year, the size of its explosive yield didn't meet H-bomb standards, according to experts. David Albright, international security expert and president of the Washington-based Institute for Science and International Security, told The New York Times:

It is reasonable to skeptically accept that North Korea is working on some type of thermonuclear device, likely one aimed at using thermonuclear materials to significantly boost the yield of a fission device.

With these insights and North Korea's past in mind, it seems like the country may just be engaging in verbal controversy only — at least for now.