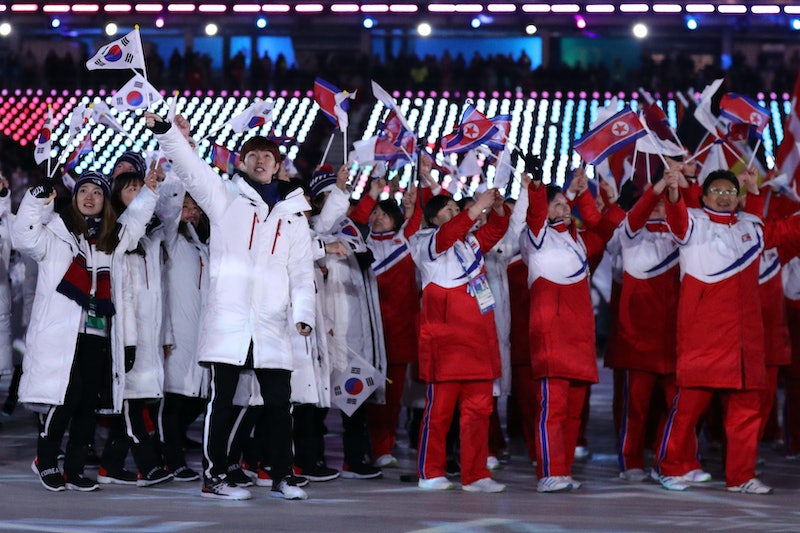 After announcing back in September that they would pursue a joint bid to host the 2032 Summer Olympics, North and South Korea requested unified 2020 teams during Friday discussions with the International Olympic Committee. According to CNN, officials from both countries met with the IOC in Lausanne, Switzerland, where they asked if they could send unified teams to Tokyo 2020 for several different sports.

North and South Korea are technically still at war, although the countries' leaders — Kim Jong Un and Moon Jae-in — announced last year that they were preparing to announce a formal end to the Korean War. During last year's Winter Olympics, the North and South Korean teams marched together under the Korean Unification flag in a gesture of unity. According to Vox, this decision — though not unprecedented — was still quite rare.

On Friday, the IOC announced that North and South Korean officials had requested to unify their teams in women's basketball, women's field hockey, judo, and rowing, per CNN. Officials from both countries also raised the possibility of jointly hosting the 2032 Olympics, an effort the IOC reportedly views in a positive light.

"The discussions at the working meeting are one further step showing how sport can once more make a contribution to peace on the Korean Peninsula and the world," IOC President Thomas Bach said following Friday's discussions, per CNN. "Therefore, we warmly welcome the historic initiative of the two Koreas to put forward a joint Korean candidature for the Olympic Games 2032."

If the North and South Korean teams were to unify in 2020, it would technically not be for the first time. In 2018, just weeks before the South Korea women's ice hockey team prepared to compete at the Winter Olympics, North and South Korea announced that 12 North Koreans would be joining the team's ranks. The members of the South Korean team were unhappy that their roster was being changed at the last minute, but the country's government hoped that such a move would pave the way for denuclearization talks with the North, The New York Times reported.

In 2018, the unified women's hockey team qualified automatically because South Korea was the host of the Winter Olympics. In 2020, however, CNN reported that the North and South Korean teams will still have to qualify — even if they are unified — and undergo the same anti-doping tests as all of the other countries' teams. This could pose certain challenges, as the World Anti-Doping Agency (WADA) has qualified North Korea's testing program as non-compliant with its code and failing to meet international standards.

During talks with the IOC on Friday, North Korean officials pledged to remedy its anti-doping controls in time for the 2020 Olympics in Tokyo. According to the CBC, China's anti-doping agency will start supervising doping control tests in North Korea — at the latter's expense.

CNN reported that the IOC is expected to announce its decision about allowing unified Korean teams during its next meeting in Lausanne, which will take place from March 26 to 28.