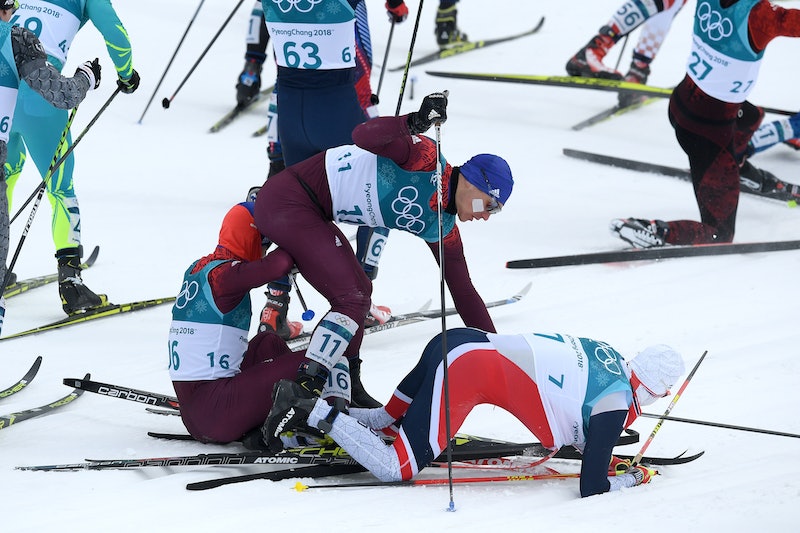 The 30-kilometer skiathlon is a monster of an event in the best of circumstances, the sort of thing that you'd think would really be best accomplished with a good start and then a steady effort. Simen Hegstad Krueger, however, proved that it's possible to overcome even the worst starts, when the Norwegian cross-country skier crashed, broke his pole and still fought back to win the gold.

Krueger started the race by colliding into two Olympic Athletes from Russia, Andrey Larkov and Denis Spitsov. In the sort of deep field that Olympic events always come with, a fall at the beginning can be absolutely fatal to an athlete's chances — but Krueger ended up beating the odds and leading the way at the end. His Norwegian teammates Martin Johnsrud Sundby and Hans Christer Holund joined him on the podium by winning silver and bronze, respectively, giving Norway a sweep in the medals for the 30km skiathlon event in PyeongChang.

Skiathlon isn't the most popular sport in the U.S., where the cross-country skiing events tend to lose attention to the more popular alpine and freestyle skiing events. In Norway, however, it's a big deal — and a big reason why the Nordic nation of only 5.2 million is currently leading the 2018 PyeongChang medal count with eight medals.

In most cross-country skiing races, the athletes only have to perfect one of the two skiing techniques: the classical technique (imagine walking on skis, with poles) or the freestyle technique, where skiiers keep their skis in a V-shape and push off on the inside edge of the skis, like they're ice skating. To compete in skiathlon, however, racers need both. They start with 15 kilometers of the classical style, and then finish with 15 kilometers of freestyle. A 30-kilometer race might seem long, but it's actually relatively short in distance-sport terms. In Sochi, the gold medal winner, Switzerland's Dario Cologna finished the 30km skiathlon in 1 hour, 8 minutes, 15.4 seconds — with his closest competitor less than a second behind him.

Krueger's fall knocked him to the back of the pack right from the very beginning, so it wouldn't have been surprising at all if he had simply stayed there. He also didn't carry any massive expectations on his shoulders; instead, NBC Olympics picked his teammates Sundby (who won bronze in the same event in Sochi) and Johannes Hoesflot Klaebo as the more likely winners.

Instead of languishing in last, though, Kreuger literally dusted himself off and pushed through the crowd to join Norway's significant cross-country skiing pantheon. And according to NBC Olympics, it didn't even take a rush at the finish — he took the lead with 5 kilometers to go, and no one had a chance after that.

I was completely last in the group, so I had to start the race again and switch focus to catch up with the guys. When I did it, I was [saying to myself], "OK, take one lap, two laps, three laps and just get into it again." ... I knew that my chance was to go early, try to surprise the group. When I got those meters, I had to go for it. I did not believe it when I turned and there was no one there. I just had to keep pushing forward until the final.

Even in a country of stand out skiers, Krueger's feat could have given him a shot at reaching the lasting collective memory. Norwegian cross country skier Oddvar Bra did exactly that at the 1982 world championships in Norway's capital of Oslo, when he broke his pole in a race and then went on to tie Soviet skier Alexander Savyalov for the win. All Norwegians of a certain age apparently remember where they were for that event, much the way Americans recall the "Miracle on Ice," in which the U.S. hockey team defeated the Soviet Union at the 1980 Winter Games in Lake Placid, New York.

In Bra's case, though, he was already in the lead, and he just didn't slow down. Perhaps Krueger's come-from-behind victory in the face of incredible odds will become the next great moment in the already packed history of Norwegian cross country skiing.