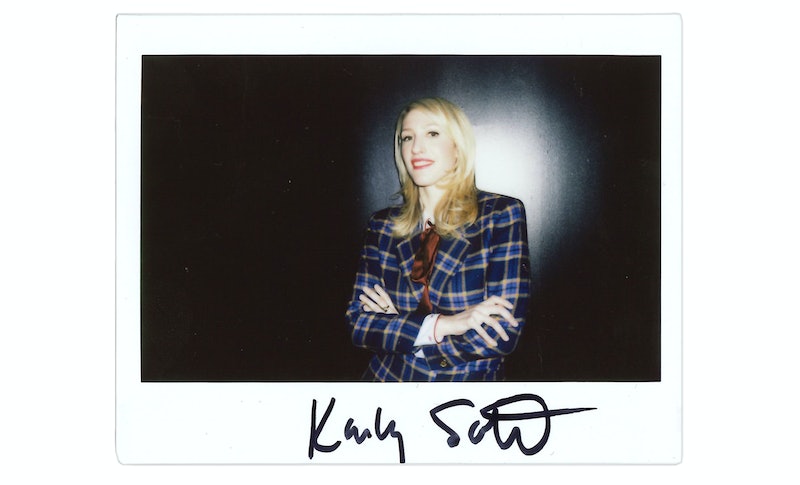 When celebrities hang out with Bustle writers, we want to give them the chance to leave their mark. Literally. So we hand them a pen, a piece of paper, a few questions, and ask them to get creative. The rest is up to them. This time, Now Apocalypse writer and Slutever star Karley Sciortino is leaving her mark in the Bustle Booth.

In 12 years, Karley Sciortino has gone from blogging about her life in a London squat to becoming one of the most prominent writers about sexuality on the internet. Now that her blog Slutever has been turned into its own Viceland series of the same name, Sciortino is venturing into scripted TV as one of the co-writers of Starz's Now Apocalypse, which premieres on March 10 and centers on millennials exploring all kinds of sex and relationships in modern LA. It's a turn of events that came as a surprise to Sciortino, who had a hard time imagining that writing about sexuality could be a full-time job when she started her blog back in 2007.

But regardless of her early expectations, that's exactly what this native New Yorker has done. In addition to her thriving blog and eponymous web series, Sciortino also writes "Breathless," a monthly sex column for Vogue. In February 2018, she published her first book, a collection of personal essays entitled Slutever: Dispatches from a Sexually Autonomous Woman in a Post-Shame World.

While screenwriting may not always have been Sciortino's end goal, it makes sense that her wealth of knowledge on contemporary sex and relationships would be an asset while writing Now Apocalypse. "I've had the benefit of interviewing so many different types of people about their relationships, alternative relationships, sexual desires, and personal experiences," Sciortino explains. "It's informed the creation of the characters on Now Apocalypse so much."

The characters on Now Apocalypse are modern, sex-positive millennials, still a rarity on screen. One character, Carly, moonlights as a cam girl, though Sciortino says that the character isn't autobiographical, despite sharing her name. She'd just done a Slutever episode on cam girls, and says she felt there was "a lot of stuff to explore in that department."

After all, she has a wealth of material to draw upon when creating interesting characters with dynamic sex lives. "My career up to this point has just provided me with a big back catalog of stories and information that informs the lives of the characters and the world of the show," Sciortino says.

In the blogging scene in the late noughties, Sciortino gained popularity for engaging in smart, feminist, and unapologetic public conversation about sex. Now, she's out to do the same thing in the golden age of television. "I really want to work more in television, developing more shows," she says. "I like the idea of like creating powerful, funny, nuanced, sexually resilient TV women and characters. I just want to use all the experiences and research I've done around sexuality to portray sex and relationships on TV in a really nuanced way."

Basically, if you like Now Apocalypse, there's more where that came from. Check out Karley's answers to our Bustle Booth questionnaire below.