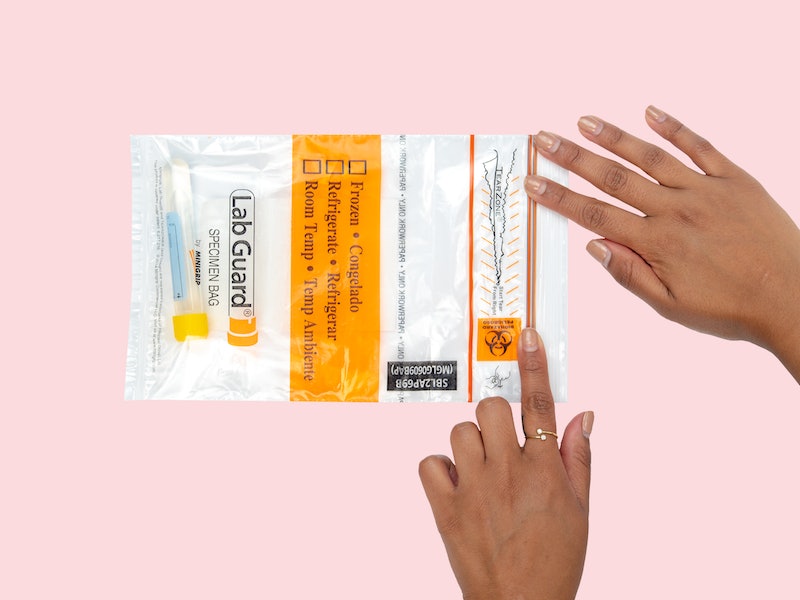 You probably don't look forward to STI testing. In addition to the fact that it’s generally annoying to have to to go the doctor, you also have to have an awkward, intimate conversation about the sex you’re having, who you’re having it with, and the specific reason you think you might have an STI. But one company, Nurx, is hoping to make the whole experience of STI testing much less stressful and scary, with their at-home STI testing kits and judgement-free access to clinicians.

“Sex is normal,” Jessica Horwitz, MSN FNP-C, VP of Clinical Services at Nurx, tells Bustle. “Getting tested for STIs is normal. Being in control of how you do it and what you get tested for is normal. And being able to ask questions in a way that’s judgement-free and stigma-free should be normal.”

The kits — which cost $75 out of pocket if you have insurance and $150 to $220 if you don’t — are customizable based on a person’s need and potential exposure. They include a kit for multi site testing (meaning throat, anus, and vagina or penis) for gonorrhea and chlamydia, as well as tests for syphilis, HIV, hepatitis B, and trichomoniasis, for people with vaginas. The most comprehensive kit offers tests for all of those STIs and every test sent out includes HIV testing, partly to reduce the stigma around HIV testing and partly to encourage people with vaginas — who are often left out of traditional HIV testing — to get tested.

Two STIs that they don’t test for in these kits are HPV and herpes. Horwitz says that they offer HPV testing for people with cervixes as a substitute for a Pap smear, but that it’s not included in the STI testing kit. And they’ve decided to leave out herpes testing altogether because so many people get positive herpes results but don’t show any symptoms, a scenario that Horwitz describes as a “false positive.”

The process of getting tested with a Nurx at-home STI testing kits starts with a survey on their website or app. It’s kind of like that conversation you have with an in-person health care provider when you go in for testing: They’ll ask about your exposure, decide whether or not it’s a good idea to administer presumptive treatment (which means treatment before you get your test results back), and then send you a kit for testing, based on your need.

Inside the kit — which comes in a discreet envelope, so no one in your house aside from you needs to know what’s up — you’ll find some combination of the following: a collection tube for urine; a throat swab and rectal swab; a lancet like the ones people with diabetes use to check their blood sugar; and a dried blood spot card. Once you’ve collected all of your samples, pop them into the provided prepaid envelope and send them off to Nurx for testing.

Horwitz says that patients can expect their results within about seven days. And, unlike many traditional testing clinics, Nurx will inform you both if your tests are positive and if they’re negative. Then, if any of your tests are positive, Nurx will connect you either with an in-house health care provider who can walk you through the next steps or will refer you to a trusted health care provider in your area.

And it’s those next steps that really make Nurx’s STI testing offering stand out from traditional STI testing, which often features busy doctors who don’t have the time to provide comprehensive STI counseling and patients who are ill-informed and freaking out about their diagnosis.

“Testing people alone is not enough,” Horwitz says. “And if you’re going to test for something, you better be equipped to give people comprehensive information about what it is you’re testing for, how to prevent this infection in the future, and then what are you going to do about it if you find out that the result is positive.”

Another way that Nurx is providing comprehensive care is by including free follow up conversations with their health care providers, via their app.

“If any results come back positive, there’s even more information,” Horwitz says. “There’s the printed material people get, but there’s also the ability to ask questions to our clinical team. Sometimes that’s right away; sometimes it’s days later.”

Horwitz says that this feature — and particularly the ability for people to ask questions even after some time had passed — was developed as a result of Nurx’s experience providing people who were prescribed pre-exposure prophylaxis (PrEP), a drug that helps prevent HIV infection, with STI testing. (A PrEP prescription requires STI testing every three months.) They realized with those patients that people sometimes need a couple of days to process a diagnosis before the questions come up.

Currently, Nurx’s at-home STI testing is only available in the United States. But in the interest of expanding access to care — especially in places where it can be difficult to access — Horwitz says that they have “big aspirations” to be international. In the meantime, people living the U.S. can access their own at-home STI testing kit on the Nurx website.

This article was updated from its original version on July 12, 2019.

More like this
How To Protect Your Digital Privacy If You Need An Abortion Post-Roe
By Kaitlyn Wylde
How Getting An Abortion Has Changed From The ’60s Through Today
By Amanda Chatel
6 Abortion Advocates To Follow On TikTok
By Sara Youngblood Gregory
The UK Abortion Laws In 2022, Explained
By Sophie McEvoy
Get Even More From Bustle — Sign Up For The Newsletter