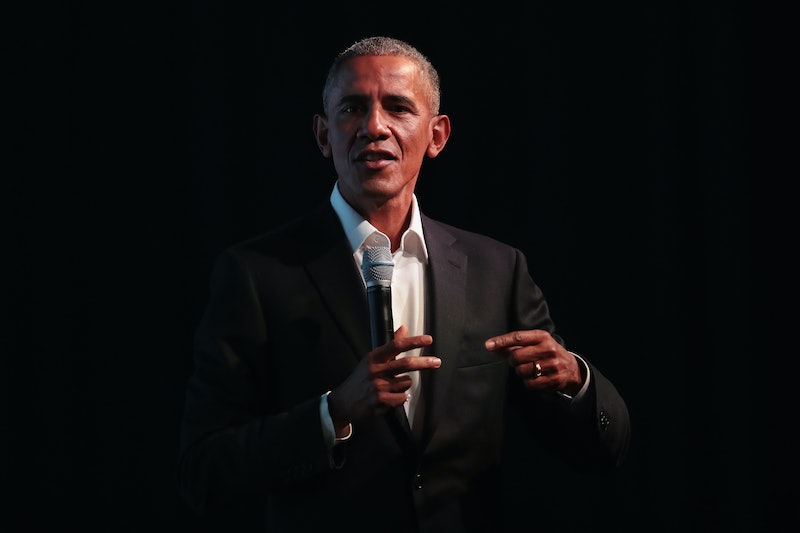 On Saturday, former President Barack Obama shared his views on the present administration's modus operandi for climate-related affairs — without ever naming names. In brief words, Obama criticized Donald Trump for his climate change record so far while speaking at an event in France.

"I grant you that at the moment we have a temporary absence of American leadership on the issue," Obama said, eliciting laughter from his audience.

The address took place in Paris at an invitation-only event held by communication professionals' network known as The Napoleons, according to Reuters. The former American president was speaking to a crowd of French executives and public figures, including ministers from former French president François Hollande's administration.

Obama's thinly veiled jab at Trump arrived only a few weeks after Syria became the latest country to support the Paris climate agreement. Syria joined the accord in early November at the UN Climate Conference in Bonn, Germany, leaving the United States of America behind as the only country openly opposed to the deal. According to the Paris climate accord, signatories of the pact have to abide by the agreement's stated rule that their domestically produced temperature never goes above 2 degrees Celsius.

In spite of a brutal civil war in the country, Syria's stance on the climate change agreement was made abundantly clear by Deputy Minister of Local Administration and Environment M. Wadah Katmawi.

I confirm that the Syrian Arab Republic supports the implementation of Paris climate change accord, in order to achieve the desired global goals and to reflect the principles of justice and shared responsibility, but in accordance with the capabilities of each of the signatories.

America's open antagonism toward the Paris climate agreement became evident in June when Trump delivered a statement from the Rose Garden after pulling out of the accord.

As president, I have one obligation, and that obligation is to the American people. The Paris Accord would undermine our economy, hamstring our workers, weaken our sovereignty, impose unacceptable legal risks, and put us at a permanent disadvantage to the other countries of the world.

The president's justification for refusing to cooperate with the accord garnered criticism from the international political leaders who gave a joint statement in Paris saying that Trump's declaration was met "with regret." Standing their ground, the leaders refused to renegotiate the terms of the agreement.

In addition to those who had criticized the American president for abandoning the deal, companies urged Trump to remain in the accord as well. After buying advertising space in the New York Times, at least 25 enterprises such as Apple, Adobe, Facebook, Gap, Google, Hewlett Packard Enterprise, National Grid, Salesforce, Unilever, and others implored the president to abide by the Paris climate agreement.

In his speech, Obama added that the country continues to follow the accord, for the time being, due to "business sense," according to the Reuters report. In addition to that, he said that domestic and international pressure placed on Trump to follow the accord helped, too. At least 11 states joined the United States Climate Alliance, an environmentally conscious bipartisan coalition that says it will stick to the deal in spite of Trump's June announcement. Some of those pact-friendly states are Washington, Oregon, California, New York, Vermont, Michigan, and Virginia, among others.

Obama's indirect criticism of Trump likely won't change the president's position on the issue, but there is some good news for those who may be wondering about the legal technicalities within the accord. The Article 28 of the Paris climate accord is legally binding for each signatory. This means that the United States cannot simply leave the agreement any time before Nov. 4, 2020.