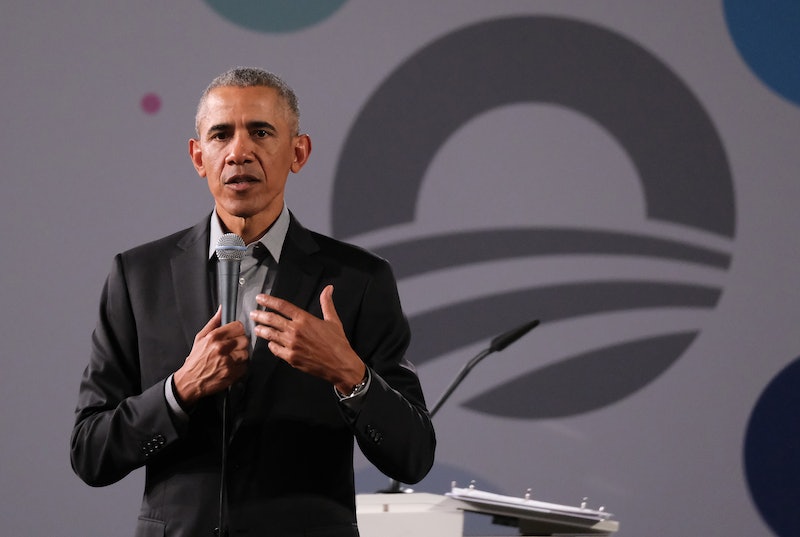 After a short hiatus once his presidency ended, Barack Obama jumped back into the political sphere, and he's ramping up efforts to unite the Democratic Party ahead of 2020. Though he's been vocal when it comes to certain Trump administration policies, he's still managed to rarely mention Trump by name. Now, Obama is launching a DNC unity fund to support his party's 2020 nominee in hopes that they'll be able to beat Trump in the general election.

"I'm excited that the DNC asked me to announce a bold new effort: The Democratic Unity Fund," Obama said in a Democratic National Committee email sent out on Friday. "Launching today, the fund will be dedicated to electing our party's eventual presidential nominee and winning up and down the ballot in 2020."

Democrats "set a new standard at the ballot box" during the 2018 midterms, Obama wrote. They shattered voter turnout records while putting forth a diverse field of candidates who "better reflect the America we see in our communities and workplaces every day." The Democratic Unity Fund aims to build on that momentum and further unite the Democratic Party, Obama explained, because "the stakes couldn't be higher" in 2020.

"The Democratic Unity Fund is a promise that whoever earns our nomination, he or she will have a strong, united, and well-organized DNC ready to spring into action the moment the general election starts — a DNC that's ready to lift us all to victory in November," Obama wrote.

During the 2016 presidential election, the DNC — which, at the time, was led by Debbie Wasserman Schultz — faced allegations that it was tipping the scales in favor of former Secretary of State Hillary Clinton. According to The Washington Post, Schultz resigned from her post after a series of emails between party officials were made public; these emails reportedly revealed coordinated efforts to help Clinton win the election.

The current head of the DNC, Tom Perez — who served as Secretary of Labor under Obama — has since sought to make the Democratic Party more transparent. When he first became the new chair of the DNC, Perez promised to keep all candidates apprised of the debate schedule, and vowed to make sure that the DNC's nomination process would be more inclusive. And on Friday, Obama's email to Democrats appeared to build on Perez's goals to unify and strengthen the party.

"No matter who our Democratic nominee is, next year is our chance to make sure that our shared values are represented in the Oval Office — our values of decency, honesty, and progress; our belief in expanding opportunity for everyone, no matter what we look like, how we worship, or who we love," Obama wrote.

Obama concluded the email by requesting that voters contribute to the Democratic Unity Fund, in order to build "the kind of robust, dynamic party infrastructure that our eventual nominee and Democrats across the country will rely on to win." The 2020 election won't just be about who wins the presidency, Obama appeared to say; the fund will also go toward supporting Democratic candidates on state and local ballots.

More like this
July’s 13 Best Beauty Launches, According To Our Editors
By Bustle Editors
Christina Aguilera Took A Powerful Stand At Brighton Pride
By Sam Ramsden
Are John Legend & Kanye West Still Friends? The Singer’s Latest Update Is Candid
By Brad Witter
'Scream’s Courteney Cox Has Broken A Major Horror Record
By Sophie McEvoy
Get Even More From Bustle — Sign Up For The Newsletter