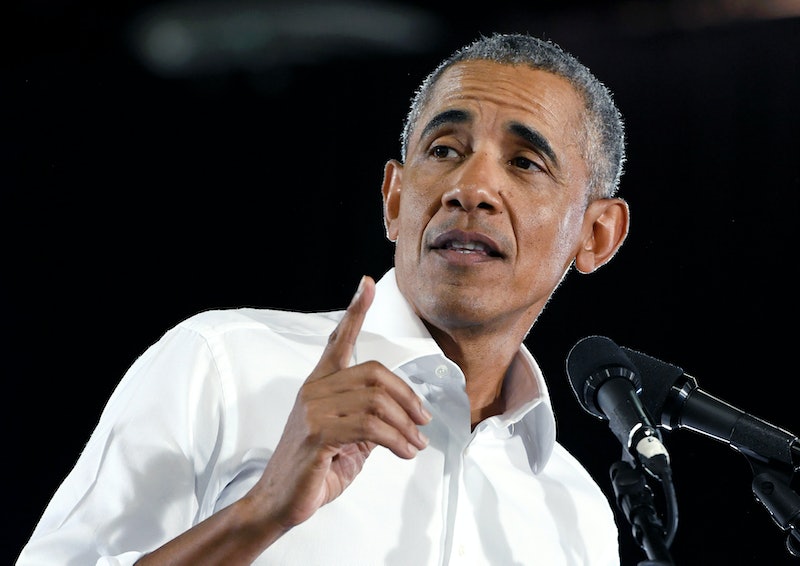 While speaking in Calgary on Tuesday, former U.S. President Barack Obama reflected on the far-reaching consequences of climate change. Notably, Obama said climate change could impact world politics in ways you maybe haven't considered — and emphasized that urgent action needs to be taken to address the issue.

As CTV News reported, the 44th president made these remarks during a speech at the Scotiabank Saddledome in Calgary, Alberta, Canada on Tuesday. As the outlet noted, Calgary houses multiple gas and oil company headquarters and has struggled with industry-related job losses in the past few years. As CBC/Radio-Canada reported, Obama's stop in Calgary was part of his ongoing Canadian cities speaking tour.

During his speech, the former American president emphasized that, in addition to causing rising temperatures and extreme weather, there are also many social and political implications stemming from climate change. As Obama described via The Hill:

Imagine when you have not a few hundred thousand migrants who are escaping poverty or violence or disease, but you now have millions. Imagine if you start seeing monsoon patterns in the Indian subcontinent changing so that half a billion people can't grow food and are displaced ... Think about what that does to the politics of the world — not just the economics of it, not just the environment.

As CTV News reported, Obama also stressed that, because of its potentially pervasive consequences, global leaders need to urgently take measures to address climate change. "All of us are going to have to recognize that there are trade-offs involved with how we live, how our economy is structured and the world that we're going to be passing on to our kids and grandkids," the 44th president said. "Nobody is exempt from that conversation ... At the current pace that we are on, the scale of tragedy that will consume humanity is something we have not seen in perhaps recorded history if we don't do something about it."

Obama's words in Calgary certainly seemed to echo sentiments he shared while he was in office. In fact, during his 2015 State of the Union address, the former president stressed that climate change was the "greatest threat to future generations," the Washington Post reported. He also similarly warned of the political consequences of climate change. "If we do not act forcefully, we’ll continue to see rising oceans, longer, hotter heat waves, dangerous droughts and floods, and massive disruptions that can trigger greater migration, conflict, and hunger around the globe," Obama said during his 2015 address (via the paper). "The Pentagon says that climate change poses immediate risks to our national security. We should act like it."

Overall, President Obama certainly believes that world leaders must urgently tackle climate change, both because of its environmental consequences as well as its political and social implications. His words on Tuesday made it clear that he isn't shying away from using his post-presidency platform to call for action on issues he believes are important.