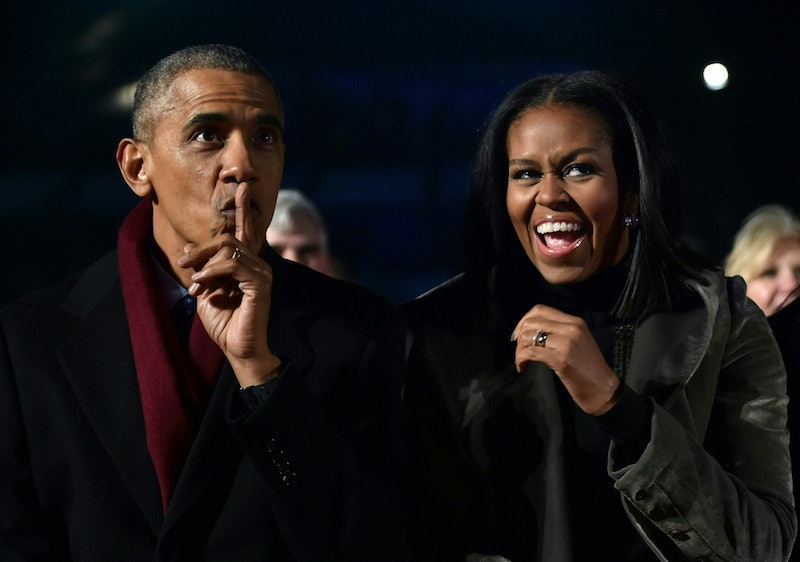 Former First Lady Michelle Obama appeared at the Pennsylvania Conference for Women on Tuesday while speaking with television producer and screenwriter Shonda Rhimes. Both figures discussed the systematic inequality women and people of color face in terms of upward social mobility. The interview was, however, interrupted when former president Barack Obama sent Michelle a video message as a loving gesture for their 25th anniversary. The video came after Michelle herself posted a nostalgia photo of the couple on their wedding with the caption, "Happy 25th anniversary @BarackObama. A quarter of a century later, you're still my best friend and the most extraordinary man I know. I 💕 you."

The tribute made Michelle well up, according to People magazine, which noted that the former First Lady's cheeks turned pink and eyes glimmered with tears as Obama spoke. "Hey, honey," Obama started, "Listen. I know you're with all these important Pennsylvania women and you're sharing the stage with our buddy, Shonda Rhimes, but I had to crash this party because today we have been married for 25 years."

"Now," Obama went on, "the idea that you would put up with me for a quarter of a century is a remarkable testament to what a saintly, wonderful, patient person you are."

Obama said that it was much more convenient for him to keep the marriage alive because "not only have you been an extraordinary partner, not only have you been a great friend, somebody who could always make me laugh, somebody who would always make sure that I was following what I thought was right, but you have always been an example to our daughters and to our entire country."

Obama also praised Michelle's "strength, grace, and determination" which made her tear up.

The former First Lady and Rhimes discussed social inequality that women and racial minorities face in entertainment and politics but Michelle went further and commented on the present political climate in the United States. "For the last eight years," Michelle said, "we had a standard of ethics, a lot of constraints. What it means to have a commander-in-chief that actually upholds the standards of the White House."

Michelle also discussed how she had felt Imposter's Syndrome during her time as the First Lady of the United States. "I’ve been at so many tables and met so many fools who are imposters, but shame on us if we just let an imposter put us down," Michelle said.

"When you know what’s right," she went on, "and you don’t say anything, you see wrong happening and you sit quietly, that’s what I want women to challenge to be, to speak up. We don’t get to the right answers without raising our voices."

Michelle also discussed how the present generation seemed to be more perceptive of injustice and abuse, in her opnion. "I think they’re more open in ways and less tolerant of obvious inequities," she said, "This generation will look at what is happening now in the world and say, ‘This doesn’t feel right,’ because they know what they were taught. They’ve been raised with an openness."

"Many kids today only know that Barack Obama was their president," she went on, "They grew up only under hope and opportunity. I think now they will be less tolerant and feel some of what is happening now as what they intrinsically know is not what they were taught."

Obama's pleasant interruption meant for his wife gave a touch of lighthearted humor to the discussion between the two ladies. After listening to her husband express his love and devotion to her, Michelle turned to Rhimes and said, "I better get home."