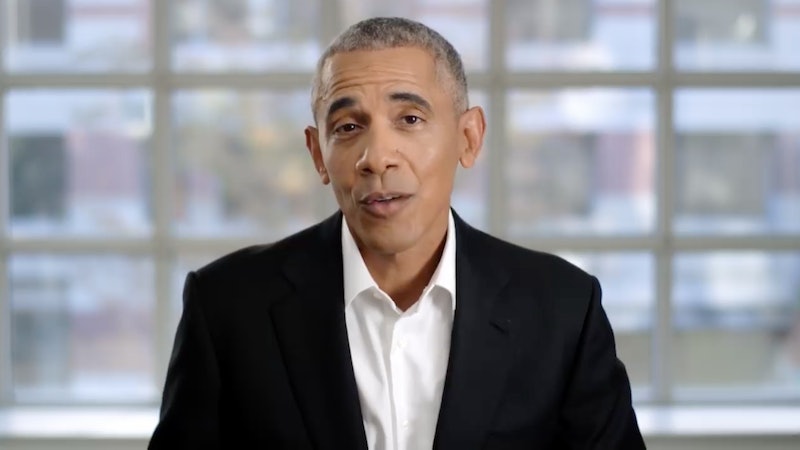 Former President Barack Obama is back on the internet this week, not addressing the entire country, but rather one special person that he has spent a big chunk of his life with — yes, it's his wife of 25 years. Obama wished Michelle a happy anniversary in a video on Tuesday evening that's gone viral, viewed more than 6 million times on his Facebook page at time of writing.

Perhaps you think he'd just tell her in person — even though they are public figures — but Michelle wasn't home on Tuesday. She was out of town for a speaking engagement. He sent the video message as a way to reach her at the Pennsylvania Conference for Women, where she spoke on a table moderated by Shonda Rhimes. It wasn't just on Facebook for Michelle to see on her news feed either. The video was played live at the event, bringing the former first lady to tears, according to People.

He acknowledged the interruption to what was an important gathering of "important Pennsylvania women," and then he jumped into his moving 25th anniversary message:

The idea that you would put up with me for a quarter of a century is a remarkable testament to what a saintly, wonderful, patient person you are. It was a lot easier for me to do it because the fact of the matter is that not only have you been an extraordinary partner, not only have you been a great friend, somebody who could always make me laugh, somebody who would always make sure that I was following what I thought was right, but you have also been an example to our daughters and to the entire country.

But the compliments didn't end there. "Your strength, grace, your determination, your honesty, the fact that you look so good doing all this, the way in which you've always taken responsibility for your own actions while looking out for the people around you is remarkable," Obama said, showering praise on the love of his life.

At the end of the video during the Pennsylvania conference, Michelle reportedly said, "I better get home."

She went on to speak on a number of important topics, from the current administration, to the election, to her and Barack's plans for the future, having already gotten her happy anniversary wishes out of the way. The former first Lady tweeted a wedding photo, writing:

Happy 25th anniversary @barackobama. A quarter of a century later, you're still my best friend & the most extraordinary man I know. I [love] you.

The talk Michelle gave had some highlights, according to Philadelphia Inquirer columnist Jenice Armstrong. Addressed the need for women to stand up to policies put forth by the Trump administration, she told the women in the room, "I want you all to pay attention because this is what happens when we don't stand up," never once mentioning Trump by name.

She also acknowledged how she sees Barack and herself continuing to have a role in politics, while allowing others to take the stage as well.

Barack and I want to be involved in developing the next generation of leaders. We don't want to be the folks that don't go away and don't give up our seats and make sure that other young people are being brought up and supported and have the resources to take our places.

So it may be the former president who makes you tear up upon hearing those kind words from the Facebook video, but it's the first lady whose words you really need to hear. Check out what both had to say — just don't get too nostalgic.