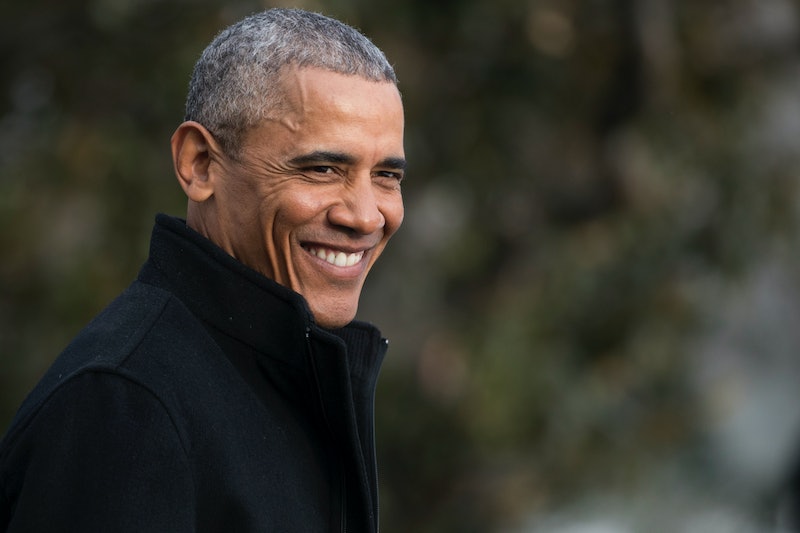 President Barack Obama's final public address to the nation took place on Tuesday, Jan. 11. It was one of his most highly-anticipated events, and the occasion was marked by a lot of melancholy reflection on the part of his supporters. And when Obama actually began his remarks, everyone watching across the nation heard a three-word chant suddenly go up — Obama's farewell speech crowd shouted "four more years" to the outgoing president, briefly drowning out all other sounds in the room.

There were some yells and shouts from the crowd throughout the speech, and just before the "four more years" chant rose from the crowd, the microphones in the room picked up a high-pitched voice calling out. But whatever was being said, the sound was ultimately drowned-out by the crowd, imploring Obama to somehow not leave the political scene so soon. It's no secret that for Obama's longtime supporters, the prospect of him handing off the presidency to President-elect Donald Trump is a grim reality, if a necessary one within the American system of presidential term limits.

Indeed, Obama himself lauded the peaceful transition of power in his remarks, and silenced the crowd when they began to boo Trump. But that didn't stop the aspirational chant.

According to Julie Bosman of The New York Times, the yelling that was ultimately drowned out was a protester, a "young woman" holding a sign that said "pardon us all now." While it's not yet clear what her cause was, Obama has fallen under some pressure to issue pardons to those undocumented immigrants who took advantage of the DREAM Act, and now fear deportation or retaliatory action at the hands of the incoming Trump administration.

Trump repeatedly pledged to impose varying levels of mass deportation throughout his presidential campaign, although the exact shape and scope of the proposals changed over time. Many people who signed up under the law, which shielded undocumented immigrants brought to the country as children from deportation, now fear that the information they had to provide the government could be used against them under a Trump administration.

Obama's farewell address marked the final time he'd speak before such a large national audience as Commander in chief, with the Trump inauguration now looming just 10 days away. At present, Obama enjoys a sky-high approval rating that's creeping ever further, while Trump's approval ratings are staggeringly poor for someone who hasn't even taken the oath of office yet.