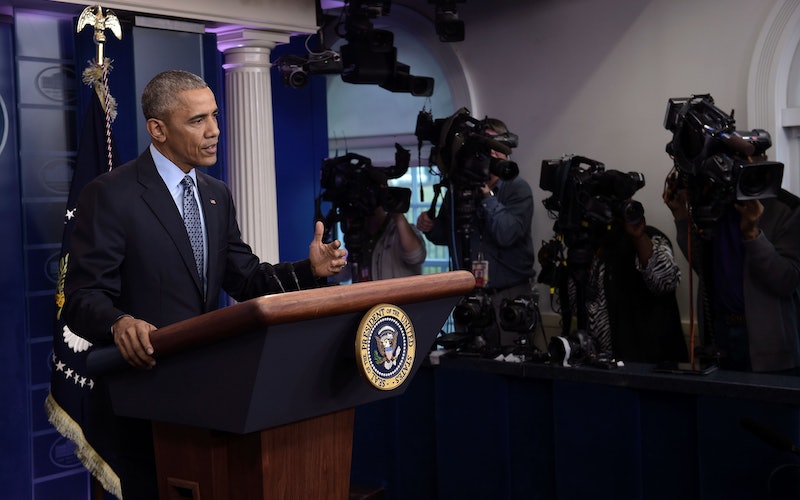 President Obama's last White House press conference was one of his best. Although he couldn't promise to stay in office for another four years, he did leave the country a parting gift in the form of some powerful feminist advice that will help spur activists through the challenges promised by the imminent administration. President Obama's feminist advice to Malia and Sasha is what everyone dedicated to restoring the liberal progress of American politics needs to hear for 2017.

President Obama spoke about his daughters' reactions to Donald Trump's Electoral College win in his first post-election interview, but he reiterated the crucial advice he gave them during his last press conference for the benefit of the millions watching at home:

President Obama has proven his feminist strength countless times throughout his presidency, and his advice to his daughters was no different. There may be no more feminist quality than resilience — women bear the brunt of countless socio-cultural burdens without breaking a sweat and still rise to become leaders in their professional fields and personal lives. Women have pushed this country forward on voting rights (and not just white women), working conditions, reproductive freedom, education, social welfare, and pretty much every other progressive cause in history.

Undoubtedly, women will be front and center in 2017, pushing the United States back on track to becoming a more free, equal, and compassionate nation. Reminding women of all they have, can, and will do was the best thing Obama could before he leaves the presidency.

President Obama has led the country through many difficult times, from the financial crisis to various terrorist attacks, and just at the moment when the country feels at most need for steady and experienced guidance, he has to step down. But even if Obama will no longer be able to serve the American people as president, they will always have his words to help inspire them to keep working for the hope and change he promised. Women in particular can be spurred onward knowing that an openly and unashamedly feminist president has been in the White House, and they won't rest until it happens again.