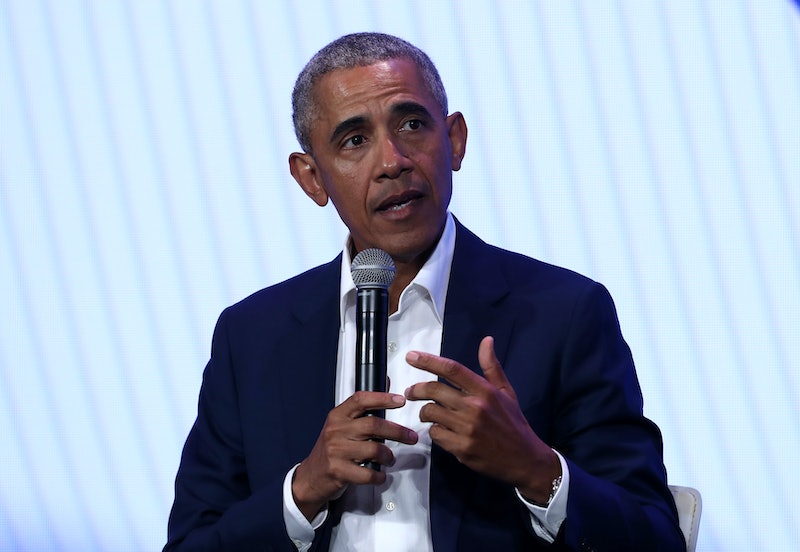 Condolences and condemnation for Friday's deadly mosque shootings in Christchurch, New Zealand, have come pouring in from high-profile figures around the world. But not everyone's message stressed the same points. For example, while President Donald Trump offered his "warmest sympathy and best wishes," former President Barack Obama responded to the New Zealand mosque shootings with a call to stand against all forms of hatred.

"Michelle and I send our condolences to the people of New Zealand," Obama said in a tweeted statement Friday. "We grieve with you and the Muslim community. All of us must stand against hatred in all its forms."

New Zealand police have reported that 49 people were killed and dozens more were injured in mass shootings at Al Noor Mosque and Linwood Mosque in Christchurch shortly after Friday prayer. The attacks have since been deemed a terrorist attack by Prime Minister Jacinda Ardern. "This is, and will be, one of New Zealand's darkest days," The New York Times reported she said Friday at a news conference. "What has happened here is an extraordinary and unprecedented act of violence."

Obama wasn't the only high-profile U.S. politician to respond to the Christchurch attacks. His successor pledged support to New Zealand, but failed to recognize and condemn the hatred behind the attack. "My warmest sympathy and best wishes goes out to the people of New Zealand after the horrible massacre in the Mosques," Trump tweeted. "49 innocent people have so senselessly died, with so many more seriously injured. The U.S. stands by New Zealand for anything we can do. God bless all!"

But Trump's tweeted statement reportedly wasn't his first response to the deadly attack in New Zealand. According to Mother Jones, Trump first tweeted a link to coverage of the incident from Breitbart. The far-right website has, in the past, been known to promote anti-Muslim Islamophobic commentary. The president's initial tweet appears to have since been deleted.

While Trump refrained from acknowledging that Friday's attack had been fueled by hate and Islamophobia, other world leaders used the shootings to, as Obama did, denounce such animus. Canadian Prime Minister Justin Trudeau, for example, vowed to combat violent extremism and urged the world to confront Islamophobia.

"Canada condemns this attack, and will continue to work closely with New Zealand, our close partner and friend, and others to take action against violent extremism," Trudeau said in a statement issued Friday. "Hate has no place anywhere. We must all confront Islamophobia and work to create a world in which all people — no matter their faith, where they live, or where they were born — can feel safe and secure."

"No person should ever have to fear attending a sacred place of worship," they said. "It is a horrifying assault on a way of life that embodies decency, community, and friendship."

Within hours of Friday's attack, New Zealand police said they had taken three people into custody, including one 28-year-old man they have since charged with murder. As police moved to increase their presence around Christchurch on Friday, New Zealand's police commissioner urged mosques across the country to temporarily close their doors as a safety precaution. "We are dealing with a very serious and tragic series of events," CNN reported he said.