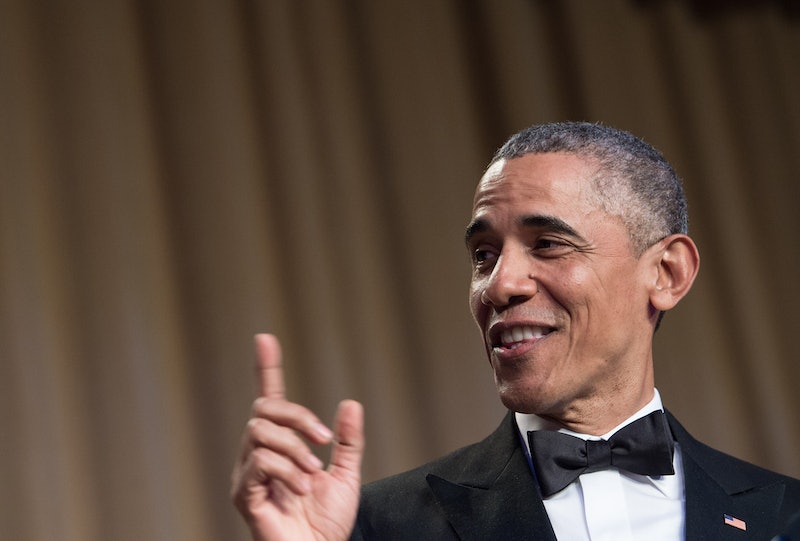 President Obama's got jokes — and all things considered, they're pretty good ones. Nowhere else is his penchant for comedy on better display than at the White House Correspondents' Dinner, where we've seen him roast both himself and others flawlessly (perhaps President-elect Trump could use some pointers on how to save his own paper-thin skin and take a joke). Obama's best White House Correspondents' Dinner moments testify to his ability to be cooler than anyone else in the room, and are yet another reason he will be so terribly missed.

The WHCD has given us some of the funniest moments from Obama's presidency. There was the time his "anger translator" emerged to finally tell everyone (well, stubborn Republicans and Donald Trump, mostly) just what the president thought of them. And of course, who could forget what was perhaps the greatest moment of them all, when Obama literally dropped the mic before exiting his final WHCD?

In light of what will likely be a very unfunny upcoming four years (unless you need to laugh in lieu of crying), here's a roundup of some of those best WHCD dinners, thanks to our Comedian-in-Chief.

One of the funniest parts of the sketch comedy show Key & Peele was their Obama Anger Translator series. Keegan-Michael Key as Obama's anger translator Luther allowed the cool and collected president to finally get out just how he was feeling. The president took advantage of this at the 2015 WHCD.

After his 2012 election victory, Obama thought it was time for some "new entrance music." He hilariously walked out to the WHCD stage to the tune of DJ Khaled's "All I Do Is Win," telling the audience "Rush Limbaugh warned you about this. Second term, baby!"

Ah, simpler times, when Trump was simply known for his ridiculous birther movement against the president. Obama called Trump out during the 2011 WHCD, saying, "Now, I know that he's taken some flack lately, but no one is prouder to put this birth certificate to rest than The Donald. Now he can get to focusing on the issues that matter. Like, did we fake the Moon landing? What really happened at Roswell? And where are Biggie and Tupac?"

Now, Obama's follow-up to that joke could make an audience cry instead of laugh. "All kidding aside, we all know about your credentials and experience. In Celebrity Apprentice, the men's cooking team did not impress the judges from Omaha steaks, but you recognized that this was a lack of leadership, so you fired Gary Busey. These are the kinds of decisions that would keep me up at night. Well handled, sir. Well-handled."

During this same WHCD, Obama roasted the birther movement at large by showing a never-before-seen "birth video," as a followup to the long-form birth certificate his home state of Hawaii had released earlier that week. The video began with a familiar scene: Rafiki presenting baby Simba atop Pride Rock in The Lion King. Well played, Mr. President.

The president has also used the WHCD to show that he can take a joke, too. He picked fun at himself and his administration's notoriously faulty rollout of HealthCare.Gov, which Obama himself called "a well-documented disaster." At the Dinner, he introduced a video clip about the website, which much like HealthCare.Gov, stalled when he hit play. Obama joked that his slogan had changed from "Yes We Can" to "Ctrl-Alt-Del."

Obama Regrets His Push For Change

At his final WHCD, Obama had plenty of remarks on the absolutely insane 2016 presidential race. If nothing else, it was a shakeup of politics at usual. Though looking back, Obama joked that perhaps he should have clarified just what kind of change he was referring to:

"The end of the republic has never looked better... Eight years ago I said it was time to change the tone of our politics. In hindsight, I clearly should have been more specific."

The president truly saved the best for last. At the end of his final WHCD, he literally dropped the mic after parting with two closing words: "Obama out." Nothing else could have been cooler.

There's no telling what the dinners of the future will look like. Will only Breitbart News be invited? In any case, at least Obama was able to prove himself as the funniest president to date — no mic drop was even needed.