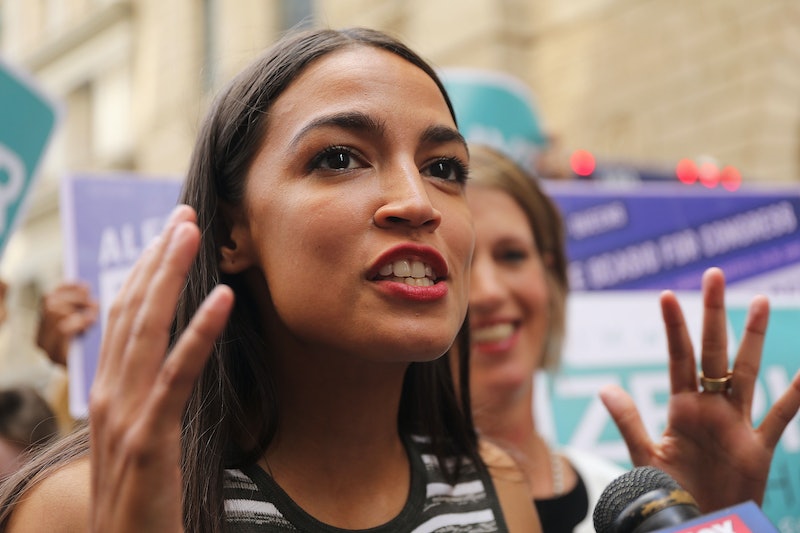 While Democrats in Congress have yet to successfully pass legislation mandating paid parental leave, it may come as no surprise to hear that some already offer their staffers the benefits they're pushing to advance. For example, Alexandria Ocasio-Cortez gives staffers a parental leave policy that goes above and beyond what federal law requires.

"In my office, *every* new parent receives 3 [months] paid leave - including dads," the congresswoman wrote in a thread of tweets posted Friday. "Moms, dads, parents; biological or adopted. If you've got a new child, you get 12 weeks to spend adjusting your family to this huge transition."

Ocasio-Cortez went on to explain that her office's parental leave policy gave staff members quite a bit of flexibility when it came to how they can use their paid leave. "Our 12 weeks parental leave is up to the parent on how they want to use that time," she explained. "They don't have to take all 12 weeks at once - for example, they can take 5 weeks off and work 2 days a week to transition in; bank 3 weeks for later in the year, etc."

While Ocasio-Cortez described her office's parental leave policy as "unusual," she stressed it shouldn't be. "I've heard the 'normal' paternity leave is 2 weeks," she added. "That is NOT okay! As my partner says: 'What do employers expect those new moms to do? Walk it off?'"

The United States currently has one of the worst paid parental leave policies, which is to say it doesn't have one at all. By law, federal employees like those employed by Ocasio-Cortez are only legally entitled to 12 weeks of unpaid leave.

That being said, a number of members of Congress have enacted their own office policies when it comes to paid family leave, and some of those policies include a full 12 weeks of paid leave extended to both men and women. In 2015, HuffPost asked every House and Senate member about their office's family leave policies and found that seven of the 26 Senate members who responded offered 12 weeks paid leave to new parents. Of the 60 House members who responded, 19 offered 12 weeks paid leave to both fathers and mothers.

On Friday, Ocasio-Cortez said her office was striving to be "a pro-family workplace" as three staffers were either new or expectant parents. "We make an effort to make our office family-friendly," the New York representative tweeted, adding that her staff were allowed to bring their babies in to the office. "We talk about what play mats + cribs we need along w/ our legislative agenda. My personal office can be used for pumping/feeding."

In a follow-up tweet, the freshman congresswoman asked for recommendations for foldable baby gear and baby-proofing.

"This is (sic) convo is bigger than parental leave - it's a larger conversation about how modern work has grown so hostile to family life," she added. "It doesn't have to be that way! Work + family can go together, but we have to break down the barriers that force people to choose between them."