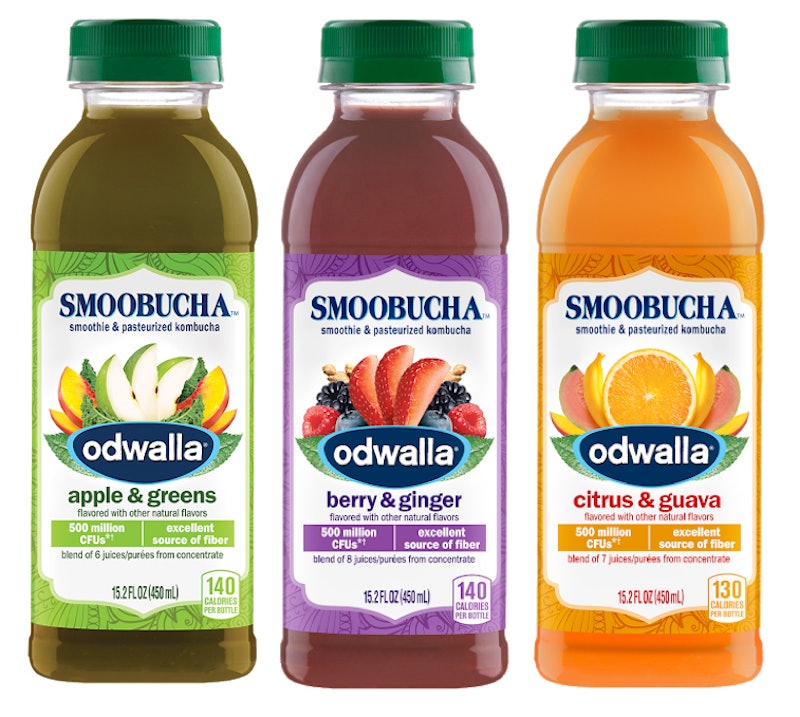 Sometimes it's hard to choose between two delicious good-for-you beverages. Now, you don't have to. Odwalla just released Smoobucha, a smoothie-kombucha hybrid. With flavors like Citrus & Guava, Berry & Ginger, and Apple & Greens, Odwalla describes Smoobucha as a unique mix of fruits and vegetables, pasteurized kombucha, fiber, and 500 mm colony forming units (good bacteria). If you like to take your breakfast on the go (or just prefer to get your snacks in smoothie form), this new product might just give your juicer a run for its money.

If you're not already in the know about 'booch, here's the TLDR: Kombucha is tea that's been fermented with a SCOBY (symbiotic culture of bacteria and yeast). Healthline reported that the evidence-based health benefits of kombucha include providing your body with probiotics and antioxidants. While kombucha, like any other wellness trend, isn't a cure-all, many people think it's pretty dang tasty, and that's reason enough to drink it on its own.

If you want to get the benefits of Kombucha, but you're not keen on the taste, Smoobucha might be worth a try. By combining a smoothie and kombucha, you can get all of the good stuff in your body at once. Because you're busy, and between water, coffee, and smoothies, and more, you could realistically spend your entire day sipping on a beverage. Most of us don't have that kind of time, which makes a grab-and-go hybrid an attractive option. This way you don't don't have to blend your own smoothie or brew your own kombucha, though you totally can if that's your jam.

Like kombucha, smoothies can also be good for you TIME reported. Laura Jeffers, a registered dietitian at Cleveland Clinic, told TIME that in order to get the most health benefits from your smoothie, it should be 70 percent veggies and 30 percent fruit. You can also add some protein powder for an added boost.

Maybe you don't have time to whip up your own smoothie every morning. You know the drill — you stock up and fruits and veggies with every intention of making smoothies, but the items end up wilting in your fridge instead. If this sounds like you, pre-mixed smoothies are an appealing option. While smoothies aren't a complete replacement for veggies, they might be the easiest way for some people to get their daily dose.

So, if you don't have time for breakfast, smoobucha might be an easy way to get some of your fruits, veggies, and probiotics for the day. If you have dietary restrictions, this is also something you can carry in your bag if you're going to an event where you're not sure whether or not you can eat the food.

According to Odwalla, you'll be able to snag yourself some Smoobucha this month, and it looks like it's already available for delivery on Instacart. A bottle will retail for $2.99 each at major chains like Kroger, Safeway, and more. If smoothies and kombucha are your jam, this could certainly make your mornings easier.