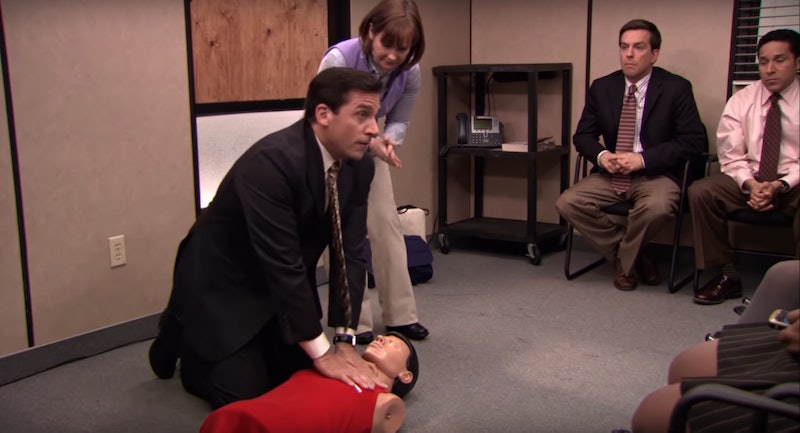 Cross Scott — no relation to Michael Scott — saw a woman sitting in the driver's seat of her car, unmoving. Scott, an auto technician, couldn't call 911 because he didn't have his phone on him, so he decided to take matters into his own hands after seeing the woman in distress. He told the Arizona Daily Star that he broke a window in the woman's car, climbed in, and performed CPR. "I've never prepared myself for CPR in my life," Scott told the outlet. "I had no idea what I was doing."

Scott may have had "no idea" what he was doing, but he knew enough to remember a classic episode of The Office. As Office fans will remember, Season 5's first aid-themed episode "Stress Relief" involved a CPR expert telling Michael to use the beat of "Stayin' Alive" as a guide for how often to perform chest compressions. The real-life Scott remembered that scene and used the song as a guide when helping the woman, the paper reports.

Two others who were passing the scene pulled over and called 911 as he performed CPR. And in addition to resuscitating the woman, Scott moved a rock in front of the woman's car tires, so the car wouldn't roll while she was unconscious, he explained to the paper.

The auto technician also told the Arizona Daily Star that the woman was breathing and conscious by the time the paramedics arrived. And he says they told him things could have been worse if he hadn't stepped in when he did. Scott even went to the hospital to confirm that the woman's health was okay after the paramedics took charge.

And for those wondering what the legal issues are surrounding incidents like this one, fans can rest assured that Scott did exactly the right thing. Arizona has a "Good Samaritan" law, which protects people like him who attempt to perform CPR, in the event that something goes wrong (although, fortunately, it didn't in this case). These kind of laws can also hold people responsible who don't try to help those experiencing medical emergencies, although Arizona's law does not. So even if you don't have formal training, you should still do what you can to help someone, whether by calling 911 or by performing CPR, as Scott did.

Obviously, the best-case scenario in emergency situations is to get medical professionals there as soon as possible, or for citizens trained in CPR to be close by to help. But that's not always the case — and people like Scott stepping in to help others can make all the difference. Scott was able to help the woman regain consciousness before the paramedics arrived, and it's all thanks to a silly bit on The Office almost a decade ago.