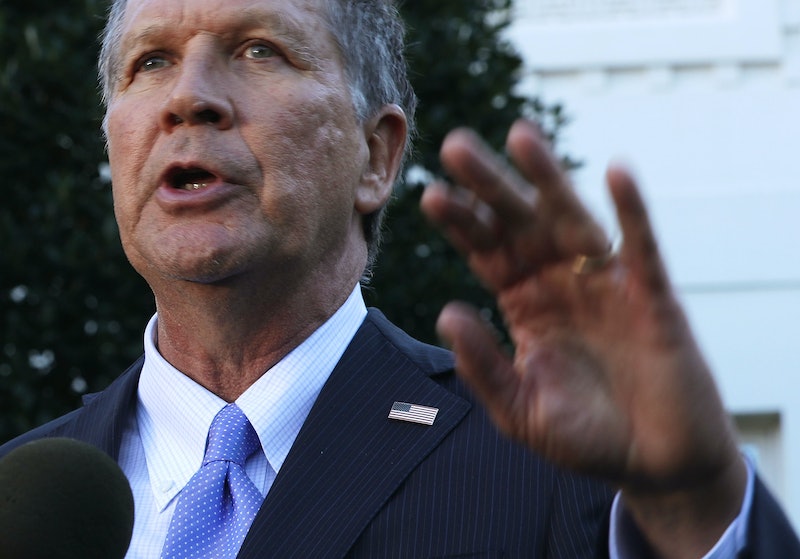 Soon, the third state in the country to instate a Down syndrome abortion ban might be Ohio, opening the door to an intense debate on women's reproductive rights. A bill criminalizing abortions performed after testing reveals a fetus may have Down syndrome has passed through the Ohio state legislature and is now headed to Gov. John Kasich's desk for final approval.

Ohio House Bill 214 easily passed through the state's Republican-led Senate Wednesday in a 20-12 vote, moving the state one step closer to enacting the anti-abortion legislation. The bill would make it a felony for a doctor to abort a fetus if they know the procedure is being sought as a result of a fetal Down syndrome diagnosis or positive screening test. Moreover, it does not require a concrete diagnosis but rather would prohibit abortion in cases where the fetus "has or may have Down syndrome." Legislators behind House Bill 214 claim the legislation is not an attempt to restrict women's reproductive rights but rather a move to end discrimination.

"I believe that life begins at conception and that abortion should never be considered an option," Rep. Sarah LaTourette, the legislator who introduced the bill, said earlier this week, as CNN reported. "However, regardless of if you agree with me or not, I hope that you can see that this is not an issue about abortion; it is an issue of discrimination — discriminating against a person, not allowing them their God-given right to life, simply because they might have Down syndrome."

Opponents of the bill, however, have criticized the legislation as a move to impede women's choices and pit the disability rights community against the reproductive rights community.

"Yet again, Ohio lawmakers are trying to disguise their attempt to push abortion further out of reach in our state," Gary Daniels, Chief Lobbyist for the American Civil Liberties Union of Ohio, said in a statement released Wednesday. "This bill does nothing to improve the lives of people with disabilities, nor increase their access to health care or other services, nor does it educate a woman and her family about having a child with a disability. It only further restricts a woman's ability to make a decision about ending a pregnancy."

Should the bill be signed into law anyone who performs an abortion in such a situation could face time in prison and have their medical licenses revoked. However, women who obtain an abortion in such circumstances would reportedly not be penalized or face criminal charges under the bill.

Down syndrome is a genetic disorder often caused by an error in cell division, which results in a sperm or egg cell containing an extra or partial copy of chromosome 21 either at or before the time of conception. According to the American Pregnancy Association, Down syndrome occurs in one out of every 800 infants.

The bill had cleared the Ohio House of Representatives in early November. Gov. Kasich now has 10 days to sign or veto the bill. Although the governor has not explicitly said whether or not he will sign the bill, he'd previously said he felt the legislation was "appropriate." Kasich's press secretary told CNN the governor would take "a good hard look at the bill."

Similar laws have been passed in Indiana and North Dakota in recent years, although the Indiana bill was blocked by a federal judge earlier this year after being challenged by the ACLU. The North Dakota law, which was enacted in 2013, has not been challenged.