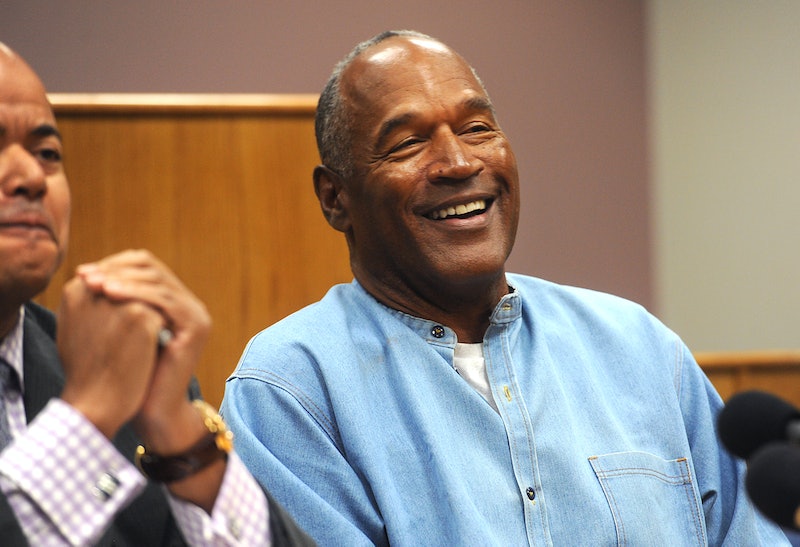 During his parole hearing, O.J. Simpson argued that he's "spent a conflict-free life" while advocating for his release from prison. Many people responded to this assertion in disbelief, as Simpson pleaded no contest to beating his ex-wife Nicole Brown Simpson 28 years ago. People shared photos of Simpson bruised and battered face and body and used Simpson's own words against him to ask why parole boards let domestic violence offenders walk free.

Lisa Bloom, a civil rights lawyer who runs the Bloom Firm, told Bustle that given the outcome of the hearing, she doubts the board even considered Simpson's history of domestic violence.

"I think this is very disturbing how his long and documented history of domestic violence was completely swept under the rug."

"Based on their decision, and the reasons that they gave, I don't think they considered it at all. I think this is very disturbing how his long and documented history of domestic violence was completely swept under the rug," Bloom tells Bustle. "I posted on Twitter a picture of Nicole's bruised and bloody face. He pleaded no contest to domestic violence, there were 911 calls, there were letters he put in a safety deposit box."

Bloom tells Bustle that while sharing these photos online can be triggering, ignoring her narrative is even worse — particularly, she says, considering how dangerous it is for women to leave abusive partners.

"She had the photos taken herself, so that people would remember and know what she went through. I think we honor her memory by standing up for her and saying she was a battered woman," Bloom says. "The most dangerous time for a victim is when she tries to leave the perpetrator, and that was true for Nicole."

On Twitter, people have been responding to Simpson's claims that he's a "good guy" who's merely had "problems with infidelity" by doing exactly what Bloom recommended: tweeting out pictures of his ex-wife.

"OJ said he has lived a conflict free life?? Maybe he is losing his memory in his old age......#OJSimpsonParole," wrote Twitter user Reyna alongside a photo of Brown Simpson's bruises.

The photos and posts make reference to the fact that Simpson faced abuse allegations on Jan. 1, 1989, following a violent altercation that landed Brown Simpson in the hospital. While police had been called to the house eight times prior, this specific domestic violence outburst landed Simpson a sentence of 30 days in jail and a year-long enrollment in a program for domestic abusers. However, according to The Los Angeles Times, Simpson did not serve jail time for domestic violence, nor did he enroll in treatment. Instead, he started sessions with a psychiatrist of his choosing.

Given this history of violence, when Brown Simpson was found murdered outside her home alongside her friend Ron Goldman, Simpson was arrested as the prime suspect. Eventually, a jury found Simpson not guilty.

While today's parole hearing isn't linked to his previous murder trial, it's worth considering how Simpson's history of domestic violence played into his release, if it did at all.

"What more could this poor woman have done? To just be completely ignored by the parole board — are we living in the 19th century?"

In order to be considered for parole, Simpson had to be judged according to the Nevada Risk Assessment Form. This document is like a checklist for the parole board, and is used to evaluate whether or not an inmate has made amends and would be a risk to the public. While there is no category that directly addresses domestic violence, there is the umbrella category of Aggravating Circumstances, which domestic violence falls under.

Eric Macramalla, an attorney and a legal analyst for the Sports Network, tells Bustle that while Simpson's history of domestic violence could have been considered, it was clearly passed over during the hearing.

At the outset, Connie Bisbee, the chairman of the board, said that they were not going to take into account the not-guilty verdict on the criminal trial. And also, not take into account the judgement entered against O.J. in the civil trial — the one where the Goldman family was awarded the $33.5 million by a jury. So, even in an instance where he’s civilly liable, the parole board expressly said they wouldn’t take that into account. Domestic violence is something that by extension wouldn’t be considered.

This doesn't mean that prior domestic violence cannot be legally used in a parole hearing, however. In this case, it wasn't. "They actually made it pretty clear they were only going to observe the four corners of the specific issue, the property issue, and that was it," Macramalla says. "Can they consider domestic violence? Yes. Did they? No."

While considerations of Aggravating Circumstances are reviewed case-by-case, that's just not good enough for Bloom and many other advocates for domestic abuse survivors.

"What more could this poor woman have done?" Bloom asks. "To just be completely ignored by the parole board — are we living in the 19th century?"