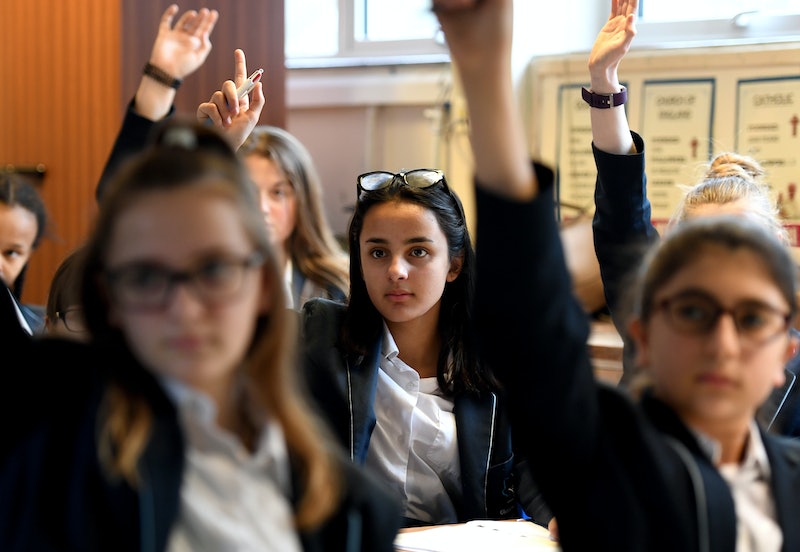 On Thursday, state officials announced that Oklahoma schools will include Sikhism in their social studies classes in future school years. The decision came courtesy of the Oklahoma State Department of Education, NBC News reports, which released new standards for public school curriculums on Thursday.

“The accurate inclusion of Sikhism in more state standards across America is part of the Sikh Coalition’s efforts to ensure that all children feel represented, included and safe when they go to school,” Pritpal Kaur, education director of the Sikh Coalition, said in a press release. "Accurate education and representation in the classroom remains critical to combating school bullying, bigotry and raising Sikh awareness."

The coalition said that it first requested that Sikhism be added to Oklahoma's public school curriculum in a November 2018 letter to the state Department of Education, in which it argued that the religion should be included "wherever world religions are mentioned" in classrooms.

"Many students surveyed over the years report that there is overwhelming ignorance about their religion among students in our public schools and believe that educating American students about Sikhs is an effective and proactive way to address the problems of bullying and harassment," the coalition wrote in the November 2018 letter. "In requesting inclusion of Sikhism in Oklahoma’s social studies standards, we are honoring their request."

Sikhism is the fifth-largest religion in the world, according to NBC News, with an estimated 25 million followers worldwide and 500,000 in the U.S., according to the coalition. But as the coalition noted, Oklahoma's current public school standards don't require that Sikhism be mentioned in lessons about the world's "major religions."

For instance, the existing standards for public high schools ask students to "summarize the impact of the world’s major religions of Buddhism, Christianity, Daoism, Hinduism, Islam, and Judaism on modern societies," according to the coalition. The omission of Sikhism is notable, given that, according to the World Atlas, there are more followers of the Sikh faith than of Daoism or Judaism, which are mentioned in the current standards.

The changes to the curriculum will initially be rolled out in the 2019-2020 school year, a spokesperson for the Oklahoma Department of Education told NBC News. During this time, the department will review teaching materials, develop a framework for the new curriculum and offer professional development opportunities to public school teachers, according to the coalition. The new standards will then be fully implemented in the 2020-2021 school year.

The coalition said that Thursday's decision makes Oklahoma the ninth state in the U.S. to require that Sikhism be included in its public school curriculum, following earlier moves in Arizona, New York, New Jersey, Texas, California, Tennessee, Idaho and Colorado. In addition, the coalition said it's currently working on a similar effort to add Sikhism to public school standards in Michigan.

In a thank-you letter to Oklahoma's Department of Education, the Sikh Coalition said that "the inclusion of Sikhism, the world's fifth largest religion, is a positive step in overcoming ignorance and in reducing bullying and harassment."