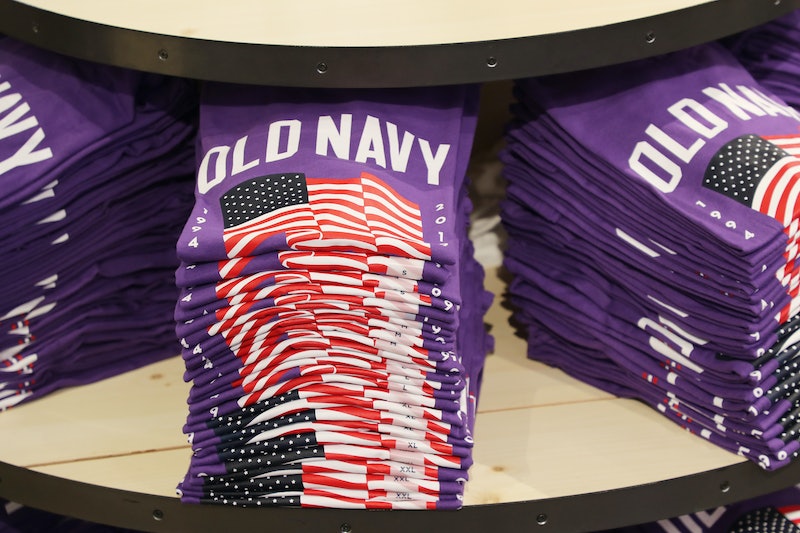 If you didn't wear an Old Navy flag tee at least once in your life, did you even celebrate the Fourth of July? The iconic tees have been around since 1994, and they're a family staple for most people. Now, though, the Old Navy flag tee is getting a makeover, but don't worry. The new look for the classic shirt has a meaningful message, and yes, there's still the American flag on the front.

This year, Old Navy is revamping their American flag tees by turning them purple. Seems kind of our of left field, right? Well, not once you understand why. According to a press release from the brand, the color purple symbolizes what happens when red, white, and blue come together. For Old Navy, the color purple is a reminder of the famous line in the Pledge of Allegiance that we are one nation, indivisible. By combining the colors of the flag, the brand wants to represent that as Americans, we are one people.

While the shirts may be purple, they still retain the original design of the Old Navy flag tee. On the front of the new shirts, fans will find the classic design with "25 Years of Belonging" written beneath the flag. The back, however, is different.

On the other side of the shirt, there's an explanation for its purple hue with the final line reading "Belonging Has Never Been A Trend."

The new purple editions of the flag tees are available right now on the brand's website, but there's a slight catch. The more colorful version of the tee is ultra-limited edition with only 1,994 being made. Why that specific number? Old Navy made its debut as a brand in 1994, and if you want one of these limited release versions, you'll need to act fast, especially since they retail for just $5.

Old Navy isn't just releasing the purple shirts, though. They're doing more to promote unity and inclusivity for the Fourth of July. As part of the holiday tee's release, the brand has partnered with Open To All, a campaign that encourages businesses to be, well, open to all regardless of gender, race, or sexuality. The brand has donated $25,000 to the cause and will be expanding the Open To All pledge to its stores in Canada and Mexico. Plus, the brand will be turning its logo purple in support of the inclusive message of the shirts from now until July 4.

Of the partnership and the new purple-hued shirts, President and CEO of Old Navy Sonia Syngal says in a press release, "One thing is certain, we will never stop believing that Old Navy can be a place where customers and communities feel a sense of belonging — and do our best to make that so. Our doors are open for everyone, and also open for ideas, open for love, open for differences, open for dialogue, and open for change."

If you want to shop the new purple Old Navy flag tee, head to the brand's website now. With a limited number created and a great meaning behind the update design, they're the perfect patriotic and inclusive wear for your upcoming Fourth of July celebration.