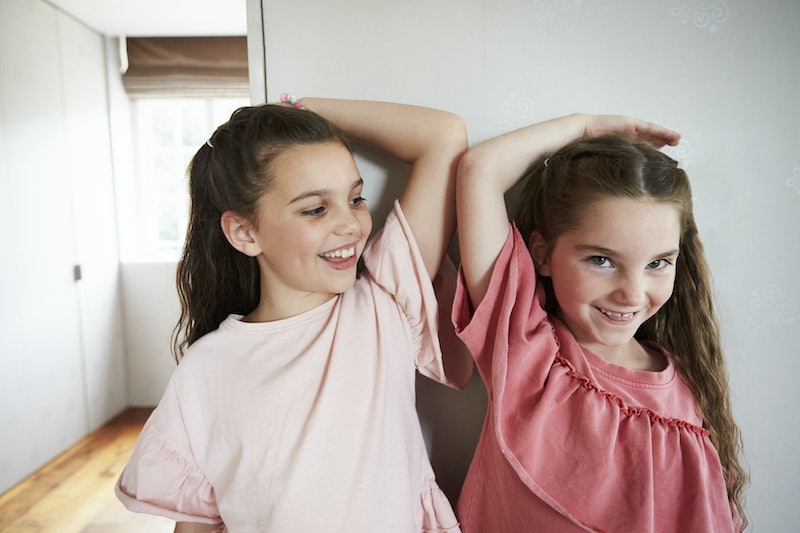 If you're the oldest child in your family, and you're convinced you're more intelligent than your siblings, it turns out that you're right (but, you already knew that). A new study from the University of Edinburgh in Scotland has found that older children are smarter than their siblings. If you have younger siblings, then you know that parents tend to get a little more laid back with each child. While a first-born usually receives tons of attention and monitoring, and younger siblings enjoy more freedom, the increased parental attention has myriad benefits for developing brains.

"First borns score higher than their siblings in IQ tests as early as age one, the study has found," the University of Edinburgh reported. "Although all children received the same levels of emotional support, first-born children received more support with tasks that developed thinking skills." I always suspected that I was smarter than my younger brother, but it's nice to have the science to back up my lifelong claims. The study noted that these increased critical thinking skills could explain why first-born babes tend to earn higher wages and be more educated than their younger siblings.

"Researchers found that parents changed their [behavior] as subsequent children were born. They offered less mental stimulation to younger siblings also took part in fewer activities such as such as reading with the child, crafts and playing musical instruments," the University of Edinburgh explained. "Mothers also took higher risks during the pregnancy of latter-born children, such as increased smoking."

This sort of goes back to how new moms may not let their first child play in a sandbox, but they shrug when their third child eats sand. Scholars have been studying the effects of birth order on children as far back as the 1800s, according to the website Intell Theory. In 1874, British Psychologist Francis Galton noted that first-born children were more likely to be treated as companions by their parents, which could explain their higher IQs.

"This means that they also undertake more responsibility than their younger siblings," Intell Theory explained. Additionally, "First-born children would get more attention and better nourishment in families with limited financial resources." While most parents don't consciously slight their younger children, it's not possible to give more than one child undivided attention, and younger children will more rarely experience being the sole focus of their parents attention.

"Additional siblings reduce the share of parental resources received by any one child," Intell Theory quoted researcher DB Downey as saying in a 2001 study in American Psychologist. Another study from Stanford University suggests that first-born children are exposed to more adult language, which helps them grasp complex words and concepts sooner.

"Laterborns are exposed to the less mature speech of their siblings," Intell Theory noted from the Stanford study. "This may affect their performance on the verbal scales of intelligence tests. Moreover, the linguistic environment becomes increasingly less mature as more children enter the family. This also gels with the finding that children in larger families have lower IQ scores."

So, while first-born children get the benefit of adult conversation at dinner parties, and everywhere else, younger siblings more often talk to other kids who probably aren't discussing politics, literature, or Lady Gaga. What's more, it's often older siblings versus parents who explain things to their younger brothers and sisters. "It is believed that the act of tutoring helps the older children to cognitively process information. Further, teaching others may improve their verbal abilities," Intell Theory explained.

So, while you might begrudge your parents for thrusting so much responsibility on you, they were actually doing you a favor, even if they didn't realize it. "Except in very rare cases, youngest siblings do not get the opportunity to tutor their brothers and sisters. This is the reason why only children do not tend to have higher IQs than firstborns."

Additionally, Curious Mind magazine noted only 40 percent of your intelligence is determined by genetics; the other 60 percent is determined by your environment. And, similar to the findings of the Stanford study, Curious Mind reported that parents tend to have higher expectations of first-born children, and give them more responsibility, like looking after younger siblings.

This was certainly true in my family. My brother is 18 months younger than me, but by the time he was born, my parents were heading for divorce, and my mom went to work full time before he was a year old. Growing up, most of the responsibility in our family was put on me versus him. Because of this, I did everything at a much younger age than my brother did. I had a bank account, a job, and a driver's license an average of three years before my brother would. I also got a master's degree while my brother left college to purse a career as a house and techno music D.J.

"Our results suggests that broad shifts in parental [behavior] are a plausible explanation for the observed birth order differences in education and [labor] market outcomes," Dr. Ana Nuevo-Chiquero from the University of Edinburgh School of Economics said in the new study.

So, now let's put all of this into perspective. According to Intell Theory, being born later doesn't mean you can't excel just as much, or more, than your older siblings. "Several studies have demonstrated that specific personality traits such as conscientiousness and openness to experience are up to 10 times more important than IQ," Intell Theory noted. And, other studies have found that while a first-born child might have a higher IQ, it's not by much. First-born children's IQs are only one percent higher than each subsequent sibling. But, hey, let's take what we can get.

More like this
These 4 Zodiac Signs Have Naturally Inquisitive Souls
By Nina Kahn
Emily Ratajkowski & Pete Davidson's Astrological Compatibility, Revealed
By Nina Kahn
20 Thanksgiving Toast & Speech Ideas That Actually Aren’t Cheesy
By Brandi Neal and Mia Mercado
Are Sagittarius & Sagittarius A Good Match? Astrologers Weigh In
By Kristine Fellizar
Get Even More From Bustle — Sign Up For The Newsletter