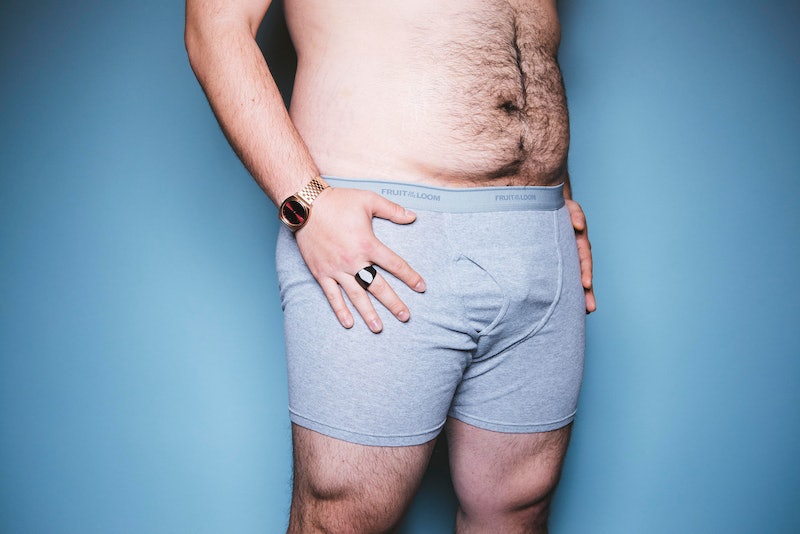 Olive oil is an eminently practical product thanks to its myriad uses: cooking, salad dressing, scalp conditioning, skin softening, helping your cat pass a hairball — olive oil may not do it all, but it's still one of the most versatile items in your pantry. That an olive oil-rich diet can reduce a person's risk of heart attack and stroke has been well documented, but did you also know it can improve a person's sexual response? According to a new study, consuming a Mediterranean diet, and specifically olive oil, is associated with a lower risk of experiencing erectile dysfunction. Who would've guessed?!

The study, led by cardiologist Christina Chrysohoou at the University of Athens School of Medicine in Greece, involved examining around 660 men with an average age of 67. Researchers found an association between following the Mediterranean diet, which is high in olive oil, produce, and fish, and having a 40% lower risk of erectile dysfunction, Medical Daily pointed out.

Olive oil consumption appears to be heavily associated with improved cardiovascular health, which is why researchers believe it had this positive effect on sexual health.

"This is a drug-free solution that allows men to keep their sexual function. But [it is] also a long-term answer to protecting a man’s ability to perform in the bedroom," Chrysohoou said, according to Medical Daily. "Viagra does not improve something long-term, it can only give some short effect in order to have sexual capacity."

The study was presented at the European Society of Cardiology conference, Newsweek reported.

Although the study's results are novel, the correlation between improved erectile function and olive oil consumption isn't anything new: A study of nearly 2,000 men, published in June in the Journal of the American Heart Association, found substantial overlap between predictors of cardiovascular disease and erectile dysfunction, including diabetes, obesity, smoking, and hypertension. Participants who reported ED also reported serious cardiac events, like heart attack and stroke, at nearly twice the rate their non-impotent peers did. Which is to say, ED might (in some circumstances) be a predictor of cardiac difficulties ahead.

"Because the blood vessels in the penis are so narrow, being unable to achieve or maintain an erection can be one of the first signs of atherosclerosis — the narrowing of arteries that can lead to a heart attack or stroke," Julie Ward, a senior cardiac nurse at the British Heart Foundation, told the The Telegraph.

If olive oil does in fact improve heart health, then it stands to reason people with cardiac-related ED would also benefit from upping their EVOO intake.

"Long-term lifestyle habits on diet and exercise seems to have a major impact on not only our arteries but our quality of life, including sexual capacity from middle-age to elderly population," Chrysohoou said, according to Medical Daily. "Consuming olive oil and sticking to a [Mediterranean] diet keeps a man’s bedroom chances high."

And "bedroom chances" aside, olive oil seems to do great things for our immune systems, cognitive function, and skin, regardless of our sex or gender. All olive oil everything from now on.

This article was updated from its original version.