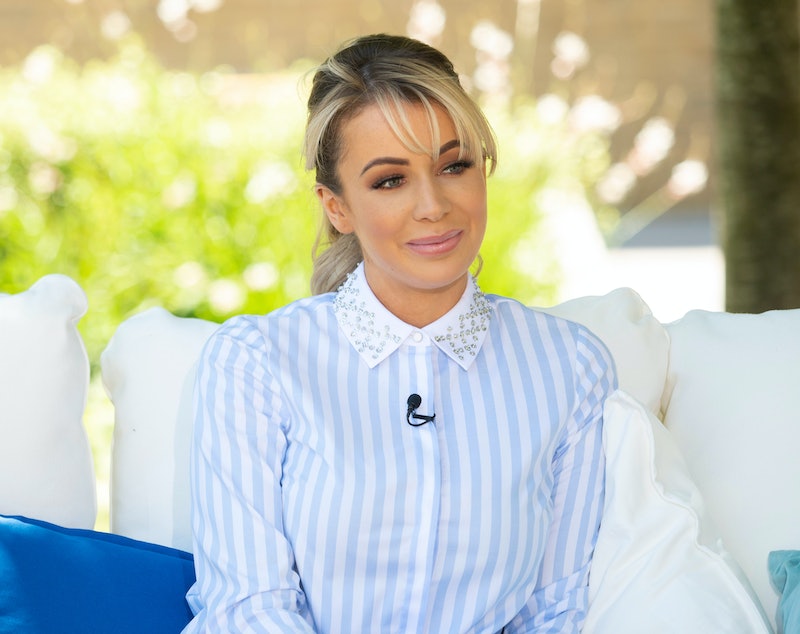 Love Island might feel like a distant memory now but the as we know, the drama always rumbles on through out the year. So far we've seen break ups, makeups, marriages and even Love Island babies over the years. But now there is great news for one Islander in particular as Olivia Atwood has announced that she is engaged to footballer Bradley Dack. Time to buy a hat, a Love Island wedding is exactly what we need.

Attwood took to Instagram to share the happy news, uploading a photo of herself kissing her new fiance Dack with of course the new addition of her ring which looks stunning. She captioned the photo "He must be crazy... Here’s to forever. I love you BD." From the looks of Atwood's tagged photos in looks like Dack popped the question during a romantic trip to Dubai. Once she had announced the news to her Instagram followers she received a flurry of congratulatory comments from fans and celebrities. Dani Dyer, Gabby Allen, and Atwood's TOWIE co -stars Yazmin Oukellou and Demi Sims were among the celebrity well wishers. Dack also shared the same photo on Instagram with the caption, "Soooo this happened last night.. one of the happiest days of my life." I'm not crying, you are.

Although the newly engaged pair seem happier, their love story hasn't always been plain sailing. The Daily Mail reports that the two have been on and off for four years. The pair initially split prior to Attwood's stint on Love Island. While in the villa, she found love with Chris Hughes, who she was with for seven months. Attwood then went on to look for love on the show Celebs Go Dating before reuniting with Dack.

Attwood's former partner Hughes has also moved on — with Little Mix star Jesy Nelson and it looks like marriage might be on the cards for him too. He told the Daily Mail "at the moment, I see myself being with her forever so eventually we'll want a family. But not now as we’re working and are both really busy." He also told The Sun "we both want to get ­married. We found each other and we have endless respect for each other. I think that's why our relationship works. We're proper family people. We love each other's family. I'm ready to settle down and I think she is." Ah, to be young and feel love's keen sting.

Now that we have a Love Island wedding coming up, I could not be excited but, I have some questions. Like who from Love Island will be in attendance — should we be expecting a full reunion or will only a select few be there? Fingers crossed Attwood decides to document the wedding and the build-up up to it like alumni Olivia Buckland and Alex Bowen, or maybe she'll opt to keep it more private like Jess and Dom Lever. Either way, I'm sure the affair will be a suitably big party, in true Attwood style.

More like this
This Pre-'Love Island' Video Of Olivia & Zara Together Changes Everything
By Bustle UK
Alan Carr's 'Changing Ends' Is A Witty Sitcom Based On His Own Life
By Darshita Goyal
Armani Jackson Is Following In His Famous Actor Sister’s Footsteps
By Catharina Cheung
Stephen Graham & Steve McQueen Are Working On A Wartime Drama
By Darshita Goyal
Get The Very Best Of Bustle/UK
Sign up for Bustle UK's twice-weekly newsletter, featuring the latest must-watch TV, moving personal stories, and expert advice on the hottest viral buys.