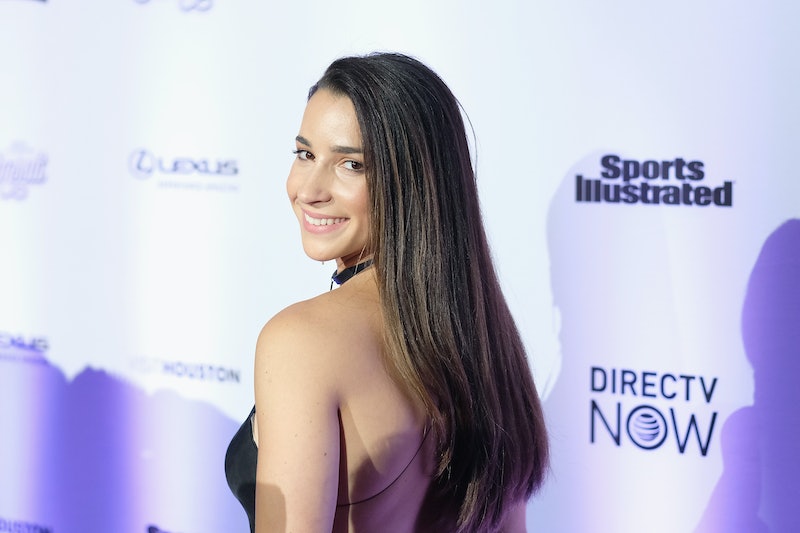 Ah, the joys of existing in a female body. In exchange for getting paid 80 cents on the dollar (or less), we get to enjoy wild, uninformed, and passionate speculation about our bodies. Sure, it’s frustrating, but once you reach a certain level of achievement — say, six Olympic medals — you’re no longer subjected to this nonsense, right? Not so much. This week, Olympic gymnast Aly Raisman responded to body-shaming she faced at the airport by making a few powerful points on Twitter.

While going through security, a woman asked Raisman if she was a gymnast, and said she recognized her by her biceps. A man at security, eager to share his own thoughts about this stranger's body, made it clear he was unimpressed. “I don’t see any muscles,” he said, according to Raisman, before continuing to stare at her. “How rude [and] uncomfortable,” Raisman tweeted.

As a reminder, Raisman’s body has won her six Olympic medals — three gold, two silver, and a bronze. Her arms and legs propel her into the air, where she spins and twists with surgical precision. They launch her off beams of various sizes, and catch her when she comes slamming back down to earth. Raisman's body is a precise and powerful tool that executes seemingly impossible feats with an ease and grace that belies the tens of thousands of hours she has spent training it. All of this, and still it is subject to unsolicited comments from a stranger.

Yes, it was a woman who made a comment about Raisman’s body first, and I’m not sure that was entirely appropriate either. Personally, I think that unless you’re a medical professional, a judge at a bodybuilding competition, or someone whose friend has asked them to check out a mysterious rash on their back, you should keep your thoughts about other people’s bodies to yourself.

That being said, as a woman, it is different having a man talk about your body as opposed to another woman. Society has long suggested, if not explicitly stated, that women’s bodies are commodities for men to use and consume as they please, so when a man makes a comment about a woman’s body, the uneven power dynamic can make the situation uncomfortable at best, and threatening at worst.

This is not the first time Raisman has spoken up about body positivity and her own struggles with body-shamers. In an Instagram post from November, she thanked those who had made fun of her in the past for teaching her how to love herself:

Shoutout to all the boys from 5th-9th grade who made fun of me for being ‘too strong’. Thanks for forcing me to learn to love myself and my body. My muscular arms that were considered weird and gross when I was younger have made me one of the best gymnasts on the planet. Don’t ever let anybody tell you how you should or shouldn’t look. There is no such thing as the perfect body type.

BRB, going to get "There is no such thing as the perfect body type" tattooed across my forehead. Until then, check out this video that breaks down one of Raisman's signature moves, and laugh and laugh at the guy who said he didn't see any muscles on her.