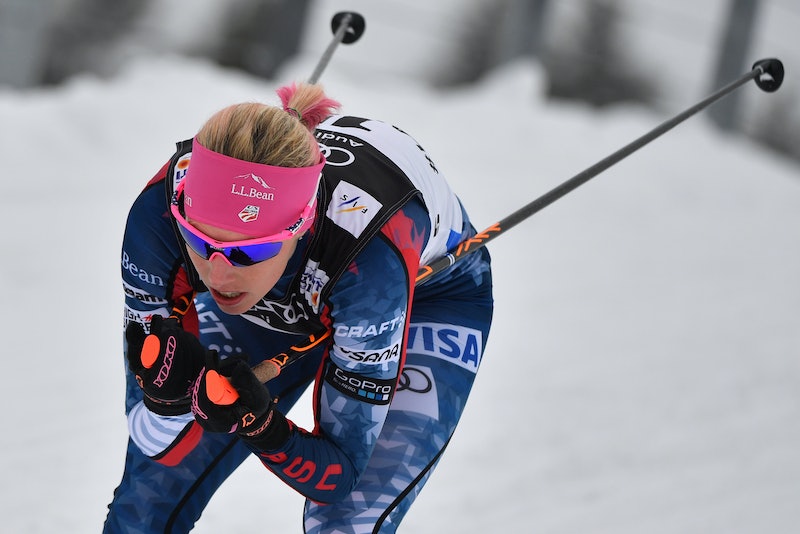 On Feb. 21, 2018, skier Kikkan Randall became the first American woman to win an Olympic gold medal in cross-country skiing. Just over three months after making history, though, she was diagnosed with breast cancer. “The first thought was disbelief,” Randall tells Bustle. “I just won an Olympic gold medal, I’m in the shape of my life, I feel amazing, I’ve done everything right. How could this be real?” While her emotions changed from disbelief to frustration, Randall decided to approach her new normal with a positive attitude and a commitment to remaining active. After a year of treatment for her cancer, she is now training to run the TCS New York City Marathon, her first, on Nov. 3.

From the beginning of her journey with cancer, Randall channeled her athlete mindset. “I was used to being in situations where there were a lot of daunting things that I couldn’t really control,” she says. “And I just taught my mind to acknowledge those things, but then reframe and focus on the things I could control.” And the most important thing she could control was her attitude. With the support of her husband, Jeff Ellis, and the rest of her family, she approached the situation from a place of optimism. She even felt grateful for the timing of the diagnosis because if it had happened months earlier, she wouldn’t have been able to compete in South Korea.

Randall was getting ready for bed on Mother’s Day 2018 when she happened to brush past her right breast and noticed something small and hard. “Even though I was feeling incredible, I was concerned enough to go get it checked out,” she says. A mammogram and biopsy confirmed that she had stage two breast cancer. Randall underwent six rounds of chemotherapy, a lumpectomy, and 33 sessions of radiation. Now, she considers herself finished with active treatment, but will be on hormone suppression for five years, with check-ins every six months to prevent recurrence.

One thing that helped Randall maintain her positive outlook during her treatment was a pair of rainbow running shoes she wore to her doctor’s appointments. “If I was having low moments or negative thoughts, I could literally look down at my feet and see the color and just remind myself it’s going to be OK,” she says. After seeing the impact of those shoes, Randall’s husband came up with the idea to make and sell rainbow socks that say, “It’s going to be OK.” For every pair sold through Randall’s website, the couple donates $2 to AKTIV Against Cancer, an organization that works to make physical activity part of cancer treatment.

Randall knows firsthand how important exercise is as a complement to her treatment. “I made this 10-minute rule with myself where even if I was feeling really crummy, I would go out and try to do something for 10 minutes,” she says. If she felt horrible after those 10 minutes, she would listen to her body and rest. But, more often than not, she easily completed those minutes of activity and ended up feeling better both physically and emotionally.

“I was so glad that I didn’t shut down the moment I got that diagnosis,” Randall says, “because continuing to [stay active] helped me get through it, and also helped me rebound quicker.” While she thought about running the New York City Marathon last year, she decided it would be better to let her body heal through the treatment. Instead, she’s running the race this year in partnership with AKTIV Against Cancer.

With the understanding that running 26.2 miles is no easy feat, even for an Olympic athlete, Randall reached out to her high school running coach, Harry Johnson, to help her train for her first marathon. They developed a training program together, gradually building up Randall’s endurance and distance while making sure to respect her body’s needs. “One of things I love as an athlete is when you set a goal, you feel yourself getting better,” Randall says. Unlike ski training, where she exercises many different parts of her body and brings gear with her, marathon training has a simpler menu of options. “All you need is a pair of shoes, and you can go out the door,” she says.

Just like any person training their body to run long distances, Randall has moments where her muscles get sore and her knees want to give out. But then she remembers how grateful she is to be here and be active. “Discomfort, just like in a race, is temporary, and if you just keep doing what you can in that moment, then it’s steps that build and build and eventually you get back to feeling good,” Randall says. “Just believe in that.”