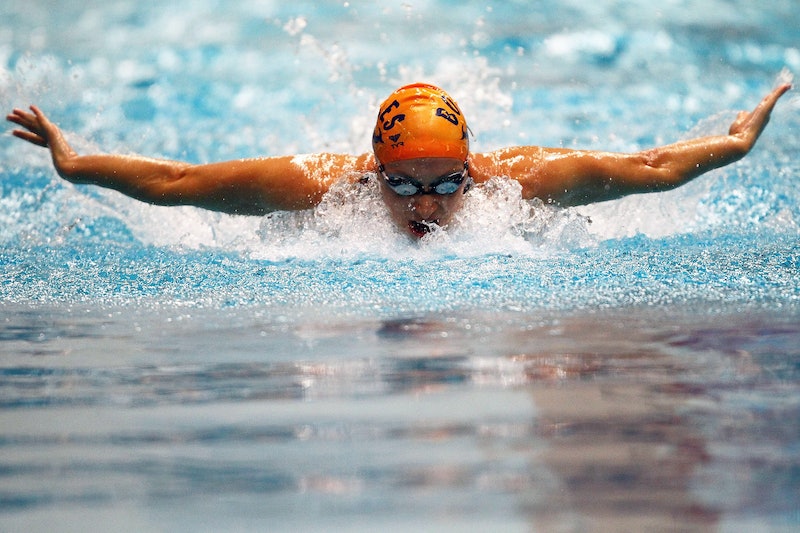 On the heels of the high-profile Larry Nassar case, another former U.S. Olympic athlete accused an official of sexual assault on Wednesday. Swimmer Ariana Kukors alleged that Sean Hutchison sexually assaulted her at age 16 when he was her coach and that he continued to initiate sexual relations with her until she was 24. Bustle has reached out to Hutchison for comment.

Kukors, a world record holder who competed in the 2012 Olympics, claims that Hutchison used his position of authority to "groom her" and coerce her into a sexual relationship. She claims that Hutchison took nude photos of her while she was underage. The police have confiscated digital devices from Hutchison's home in Seattle to look for evidence and have not yet issued charges or an arrest warrant, the Associated Press reported.

"I never thought I would share my story because, in so many ways, just surviving was enough," Kukors, now 28, said in a statement on Wednesday. "I was able to leave a horrible monster and build a life I could have never imagined for myself." She continued:

But in time, I've realized that stories like my own are too important to go unwritten. Not for the sake of you knowing my story, but for the little girls and boys whose lives and future hangs in the grasp of a horribly powerful and manipulative person. That they may not have to go through the same pain, trauma, horror, and abuse. That their parents, mentors, and guardians are better able to spot the signs of grooming and realize its tragic consequences before it's too late.

In 2009, Kukors broke the world record for the 200-meter individual medley, a race that utilizes four different strokes (butterfly, backstroke, breaststroke, and freestyle). The event earned her the title of "Female American Swimmer of the Year" from Swimming World. Three years later, she competed in the London Olympics, finishing fifth in that same race. She retired from competitive swimming in 2013 and now consults about health and wellness.

Hutchison coached Kukors for years, including during that record-breaking championship in 2009 and her time on the distinguished Fullerton Aquatic Sports Team (FAST) in southern California, which he led. He retired from the team in 2010 amid rumors that he was in a relationship with a swimmer, reputed by many to be Kukors, though he continued to deny the allegations, saying, "There is no relationship."

Rival coach Mark Schubert reportedly hired a private investigator to look into the rumors around Hutchison at the time. The investigator allegedly took a photo of Kukors' car outside Hutchison's apartment at 5 a.m. in 2009, when the swimmer was 21. Schubert later denied being the one who hired the investigator.

Grooming is a process by which many adult molesters prey on children. Psychiatrist Michael Welner described the six stages of grooming for Oprah.com: first, the abuser targets the victim by "sizing up the child's vulnerability," then gains the victim's trust, and then fills a need so the adult "assume[s] noticeably more importance in the child's life."

The molester next isolates the child by creating "situations in which they are alone together" (Kukors alleges that Hutchison assaulted her while they were training and on trips). The abuser slowly sexualizes the relationship and desensitizes the victim to it "through talking, pictures, even creating situations ... in which both offender and victim are naked."

Finally, the molester tries to "maintain the child's continued participation and silence" by threatening "to end the emotional and material needs they associate with the relationship, whether it be ... the coaching one receives, special outings, or other gifts."

In her statement on Wednesday, Kukors mentioned the trial of former Olympic doctor Larry Nassar and claimed that, as in that case, officials had suspected Hutchison yet USA Swimming cleared him of any wrongdoing. She said that the institutions around young athletes should be held accountable for keeping them safe.

"It is imperative that institutions entrusted with children put into place safeguards to protect children and not their reputation," Kukors' lawyer, Ray Mendoza, told the Orange County Register.